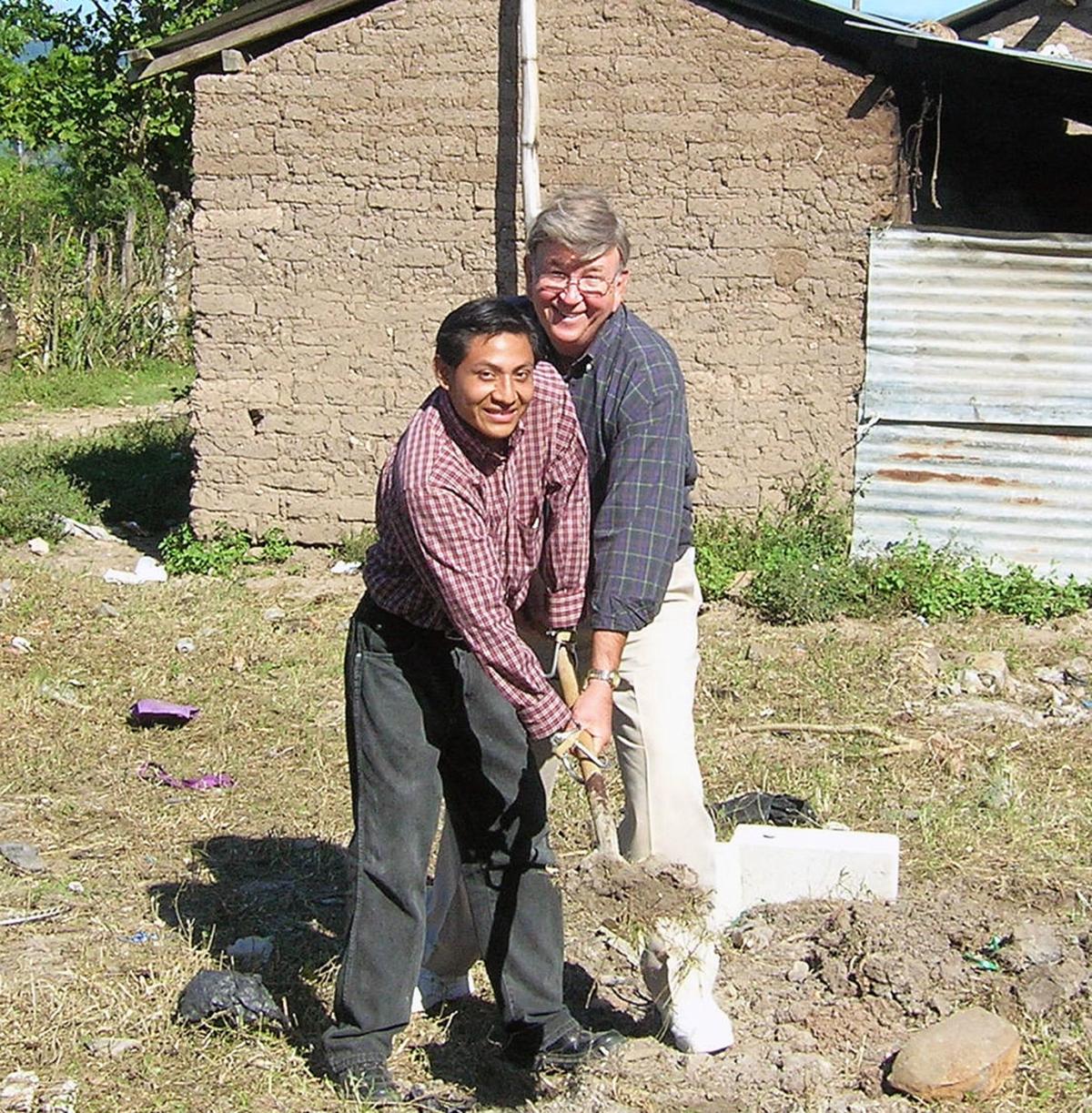 Rene Segura and Robert Byrd stop for a photo during work on Rene’s home in 2006. The home, specially designed to accommodate Rene’s physical needs, was built and paid for through support from the Wiregrass. 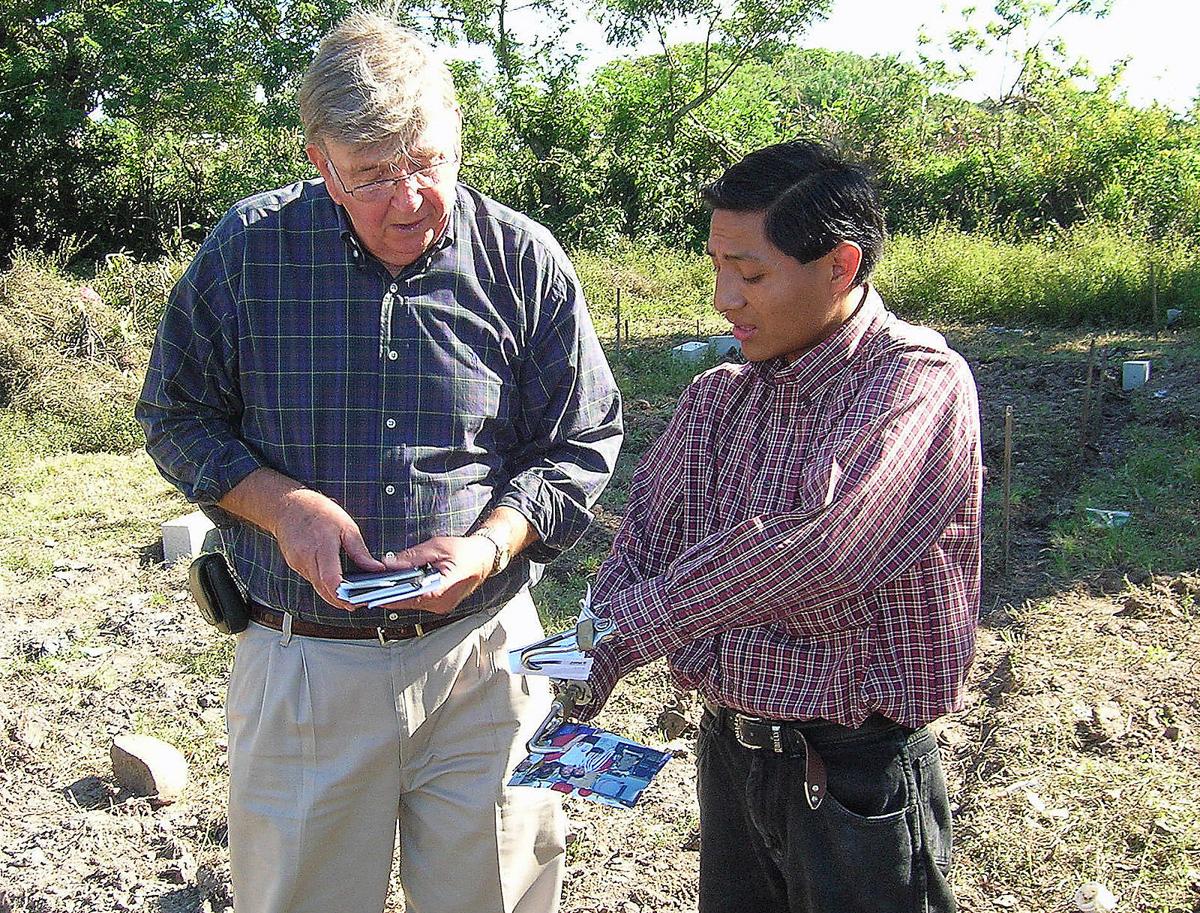 Rene Segura and Robert Byrd go over plans for Rene’s new home in Guatemala in 2006. The home, specially designed to accommodate Rene’s physical needs, was built and paid for through support from the Wiregrass. 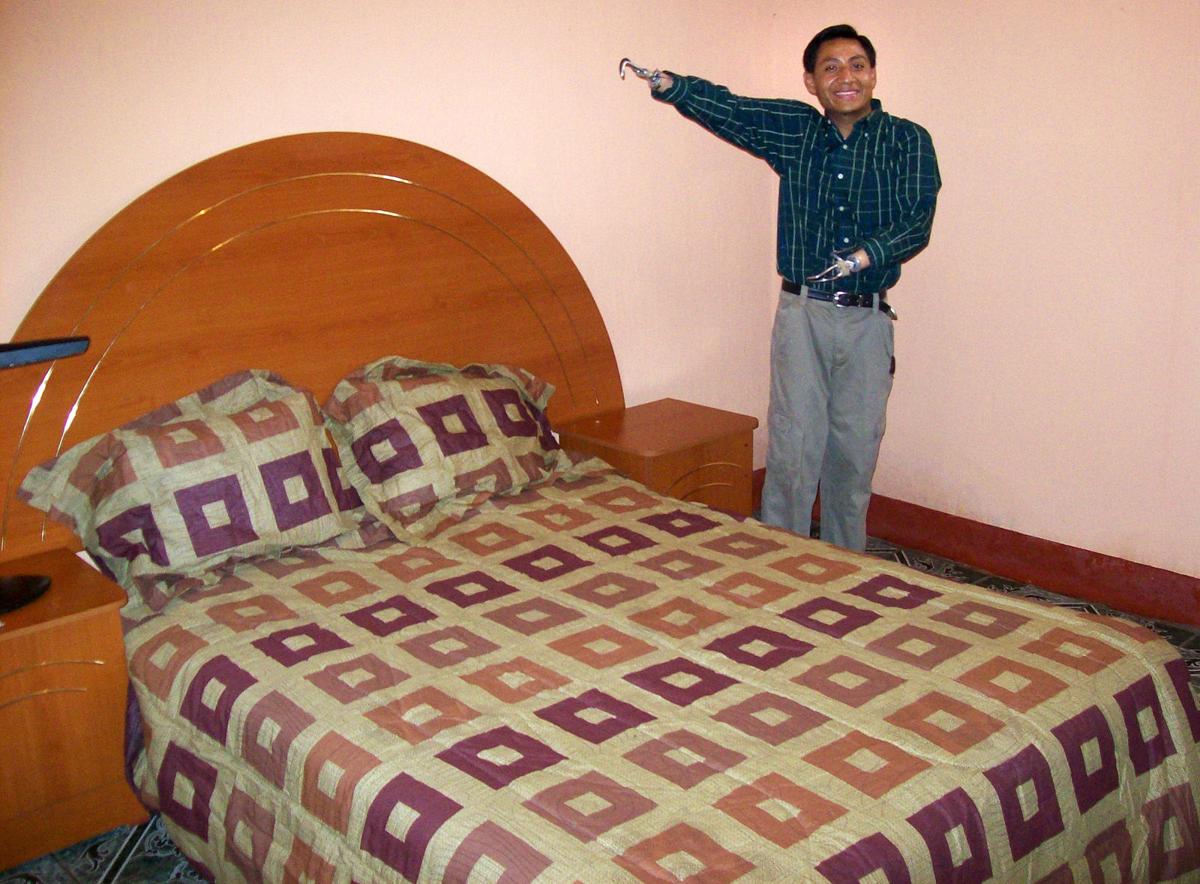 Rene Segura poses in the bedroom of his new home in Guatemala in 2007. The home, specially designed to accommodate Rene’s physical needs, was built and paid for through support from the Wiregrass.

Rene Segura and Robert Byrd stop for a photo during work on Rene’s home in 2006. The home, specially designed to accommodate Rene’s physical needs, was built and paid for through support from the Wiregrass.

Rene Segura and Robert Byrd go over plans for Rene’s new home in Guatemala in 2006. The home, specially designed to accommodate Rene’s physical needs, was built and paid for through support from the Wiregrass.

Rene Segura poses in the bedroom of his new home in Guatemala in 2007. The home, specially designed to accommodate Rene’s physical needs, was built and paid for through support from the Wiregrass.

A young Guatemalan boy became a quadruple amputee after suffering a severe electrical shock in 1996, but the event charged a Geneva County couple and church to make a difference in his life that’s still happening today. ...

It’s been almost 25 years since Hartford’s Robert Byrd stepped inside a hospital room in Guatemala.

It changed the course of his life, galvanized a local church and set a young boy on an improbable path to dignity, a journey Byrd has doggedly monitored since that day.

He wasn’t even supposed to be there.

In 1995, Byrd begrudgingly agreed to spend time in Guatemala to teach people to perform jobs that once belonged to Geneva County residents. The North American Free Trade Agreement sent thousands of textile jobs to other countries, including those from the county’s Van Heusen shirt factory. Byrd had led the local factory and soon found himself assisting a new plant in Guatemala City.

While there in January 1997, he tried to redeem the time by volunteering at a local hospital when a nurse asked him to visit a boy there who had suffered a severe electrical shock.

Fourteen-year-old Rene Enrique Segura Galicia and his brothers were outside playing on a Sunday morning, Oct. 27, 1996, when his 8-year-old brother got his kite caught in a power line.

While his mother was inside making tortillas for breakfast, Segura attempted to remove the kite from the line with a long metal tube he found nearby. Although he tried to avoid the live lines, he made contact and at least 2,000 volts of electricity coursed through his body.

The family was too poor to afford medical care, and it took four days to get Segura to a hospital that could care for him. By that time, gangrene had overtaken his extremities.

None of them could be saved.

The momentWhat Byrd saw that January morning was a boy who was little more than a head and torso. Byrd had spent enough time in Guatemala to know that Segura had practically no chance of surviving in the poverty-stricken area. Segura’s father had been killed earlier in one of Guatemala’s revolutions, and Segura and his siblings had been expected to provide income for the family. At the time of the accident, Segura was working a job that paid $10 a month.

Byrd was a factory manager. He knew nothing about the medical needs of foreign children, nor was he specially equipped to respond to a quadruple amputee.

None of that mattered in that instant. The moment is still fresh in his mind.

“I want you to try to visualize this: A 14-year-old boy laying on a broken hospital bed in a dingy room with no arms and no legs,” said Byrd, his eyes moistening as he traveled back to that day. “I knew right then there was no way I could walk out that door without trying to help him. There was no way.”

Knowing that he wanted to help and knowing how to help were different things for Byrd. He began making phone calls and talking to anyone who would listen. He soon learned about the Shriners, a fraternal organization that provides no-cost medical care for children under 21.

Byrd said the Shriners initially told him they did not have the capacity to help Segura.

“They were nice, but just said they couldn’t do anything for him,” Byrd said. “I was having a conversation with a lady there, and I remember telling her, ‘Ma’am, I’m sorry, but I just can’t accept that answer.’”

In July 1997, the Shriners accepted Segura for care. They took him to Shriners Hospital in Tampa, Florida, to be fitted with prosthetic arms and legs.

Byrd also was working to build support for Segura through friends and his local church, Hartford United Methodist. The church adopted the teenager as one of its primary ministries.

Byrd also was in regular contact with his friend Buddy Guilford, one of the first people back home to hear about the hospital-room encounter and one of the first to see Segura during a visit to Hartford soon after he received his first prosthetics.

“When Robert first brought Rene to Hartford and out to the field where I was working I was completely … well, I don’t have the words for it. But I can say that when they left, I fell to my knees,” Guilford said.

The prosthetics were a miracle for Segura, who learned to walk and feed himself with his new arms and legs.

At the time, Segura had the equivalent of a first-grade education and began to return to school.

The first few years of school were rough. He was many years older than his classmates. Although the prosthetics gave him an opportunity at a productive life, the age difference and plastic arms and legs made Segura a social outcast. He almost gave up on school.

Although Segura did not have his physical extremities, the nubs he retained continued to grow and the prosthetics often had to be adjusted. Normal wear and tear also necessitated changes and upgrades. The Shriners do not provide care for people older than 20, and prosthetics can be expensive.

An offhand conversation on an airplane trip with a seatmate led Byrd to seek help through Limbs for Life, a nonprofit organization based in Oklahoma City that provides ongoing prosthetic care for qualified patients.

Segura also managed to finish high school. During that time, Byrd, friend Tom Freeman, high school classmate Bo Lee and others traveled to Segura’s hometown in 2006 to build him a house.

“There were many bumps in the road. But, in the end, we have a lot of great memories. It is a miracle to see what Rene has accomplished,” Lee said. “I know that God has a great plan for Rene.”

A year after that, Segura began college. He graduated in 2012. Byrd and others traveled to see his modest graduation ceremony. He then pursued more education.

Segura’s supporters were not only motivated to help due to his physical needs; they were repeatedly moved by his determination to succeed. Typically, Segura’s only way to and from school or college was by city bus. When classes ran late and did not allow time for him to catch the last bus of the evening, he would find a nearby place outside to sleep and return to class the next day. Byrd and others said teachers told them Segura was one of the most faithful attendees while in school.

Segura’s college certificate qualifies him to do social work for the government. However, there are no incentives in Guatemala to hire physically challenged applicants.

Gainful employment is his greatest want and need. Now able to stand on two (plastic) feet, a steady job would go a long way in making him feel whole.

Without regular work, Segura has tried to support himself by using his home as an Internet cafe. He has two computers in his home, and the occasional patron comes in for internet access and a Coke or cup of coffee. It doesn’t, however, provide adequate income.

Sometimes, the stars seem to align to make something occur. That didn’t happen with Byrd and Segura in Guatemala.

Byrd never wanted to be there. His work in Guatemala meant that while people would be working in Guatemala City, they wouldn’t be working in Geneva County. His frequent trips to Guatemala through Tallahassee, Florida, were often met with obstacles. He dodged Hurricane Opal during one trip, left his briefcase full of important documents on one occasion, had a wreck on another and tried to help care for his ailing mother during that time as well.

He lost Segura’s passport and visa before his first trip to Shriner’s in Tampa.

“It was like there was something that was trying to keep me from helping him,” Byrd said.

Something stronger, however, brought the Byrds and Segura together, according to Rene.

“It as if God chose them,” Segura said recently during an email exchange. “They are like angels sent by God. Through them, I have come forward through my disability.

“Without them, I would not be able to walk, continue my studies or have a decent house.”

Throughout the arc of Segura’s story, others have always come along to help the Byrds — friends, business associates, church members and strangers.

“It was something that was meant to be,” Byrd’s friend and fellow church member Gerald Brannon said.

The Brannons have supported Segura since hearing about him from Byrd.

“Who knows, just a few days earlier or later and maybe Robert never comes in contact with Segura in that hospital,” Brannon said. “But he did, and it’s been a joy to watch Segura progress and do the things he has done.”

A tiny church in a small county in a little state has made a big difference in the life of a man in Guatemala.

Now, the Byrds are in their 80s. They’ve spent one-quarter of their lives caring for Segura and have recently been thinking about what will happen to him when they die. Byrd believes Segura will need continued support.

“I think about what will happen to Rene the rest of his life,” Byrd said. “Sometimes, it consumes me.”

July/August 1997: Rene comes to Shriner’s Hospital in Tampa to be fitted with prosthetics

November/December 1997. At age 14, Rene returns to school with the equivalent of a first-grade education.

2003: Rene ages out of his care from the Shriners

2006: Work begins to build a house for Rene and a nearby house for his sister.