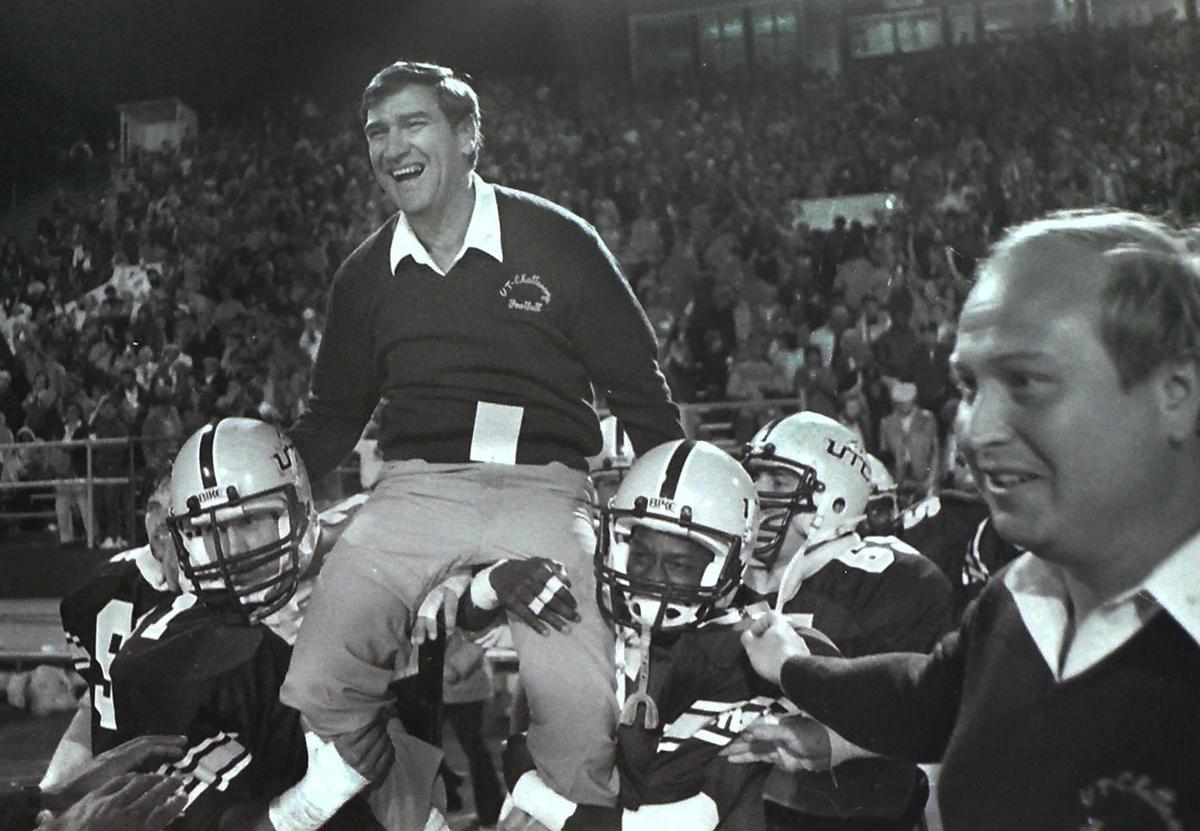 Nix is carried off the field by players after a big win at UT-Chattanooga. 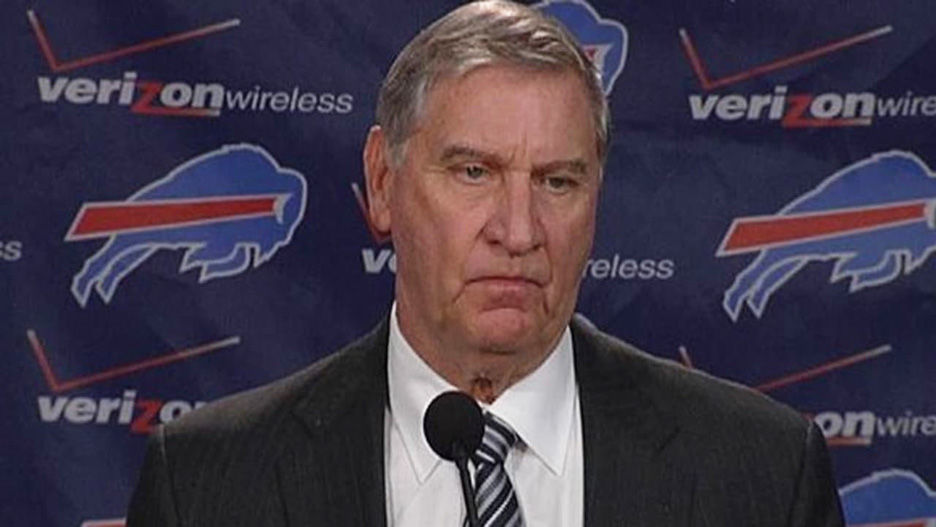 Buddy Nix enjoyed a lengthy career in college and the NFL, most notably as general manager of the Buffalo Bills.

Nix is carried off the field by players after a big win at UT-Chattanooga.

Buddy Nix enjoyed a lengthy career in college and the NFL, most notably as general manager of the Buffalo Bills.

For Buddy Nix, the answer was simple. The fish were just bigger, better and more plentiful in the south.

A former scout and later general manager of the Buffalo Bills, head coach at Tennessee-Chattanooga and various other stops along the way, Nix was just a couple of years removed from taking orders from “Bear” Bryant as a graduate assistant at Alabama when he made his first head coaching stop at Eufaula High School. After stints that included Auburn, LSU and Southern Miss, Nix found his way to the NFL, including a lengthy stay with the San Diego Chargers and two stops with at Buffalo.

Despite his travels, Nix always looked for talent in the south, signing several players from Enterprise as well as others from the Wiregrass and the Florida Panhandle.

“At Buffalo, we drafted many players from the south and people thought I was biased,” said Nix, now 80 and retired in Chattanooga. “I would tell them it’s like fishing. You find a lake to fish that has good fish in it.”

A native of tiny Carbon Hill, he went on to play at Talladega High School and later as a linebacker and fullback at Livingston State College, now known as the University of West Alabama.

He worked as a graduate assistant under Bryant at Alabama in 1961 and part of ’62 before heading to Anniston High as an assistant. Alabama had won the national championship in ’61 with players such as Pat Trammell, Lee Roy Jordan, Bill Battle, Billy Neighbors, Charlie Pell, Jack Rutledge and Bill Oliver. Some became star players, other legendary coaches.

“They allowed me to be around Coach Bryant, but I was a flunky,” Nix recalled. “When he talked to me it was ‘Hey you, get that blocking dummy over here.’ I was a gopher.”

Bryant suggested to Nix that he take another G.A. position at Kansas, but he wanted to lead his own team,

“I wanted to be a head coach as long as I could remember, so I went back to high school,” Nix said.

After three seasons at Anniston, the call came with an offer as head football coach and athletic director at Eufaula. He would get his chance to be a head coach.

Hired the replace legendary Bill Buchanan at Eufaula, Nix was 25.

Lyndon Johnson was president, Lake Eufaula was still in its infancy (formed on the Chattahoochee River in 1963), Bloody Sunday and the ensuing marches in Selma occurred just months earlier, and My Fair Lady was the big winner at the Academy Awards.

In Nix’s first season, Eufaula managed just a 2-7-1 record, scoring in double-digits just once. But, the second season (1966) resulted in a 6-4 record and the school’s first-ever Border Conference title, including wins over Opelika and Central of Phenix City. The Tigers were never held to less than double-digits. In fact, it was the first season Eufaula had beaten Central, Valley and Sidney Lanier in the same season.

“What a great conference that was then,” Nix said.

Nix moved up the ladder after year two at Eufaula, taking a larger high school post in Georgia.

Nix took over a Jonesboro, Georgia job where the local prep team had one of the longest losing streaks in the nation for larger high schools. Nix thinks the skid was at 27 consecutive games. Jonesboro would snap that streak, but only win once his first year at the helm. In season two under Nix, Jonesboro qualified for the state playoffs.

He also stayed at Jonesboro just two seasons before heading to the college ranks. He was an assistant at Carson-Newman University in Tennessee before returning to his alma mater at Livingston in 1970-71. He became linebackers coach at Southern Miss from 1972-75, then took a defensive backs coaching post under Doug Barfield at Auburn in 1976.

Ralph “Shug” Jordan had retired after the previous season, but he maintained an office at Auburn, right next to Nix’s office.

Pat Dye would be hired to replace Barfield after the 1980 season, and Nix took a position as defensive coordinator at LSU, first under Jerry Stovall and lastly under Bill Arnsparger.

Prior to the 1984 season, UT-Chattanooga came calling. The Moccasins needed a head coach.

At Chattanooga, the Mocs were a .500 team in the Southern Conference and just below that overall as it often filled large schools’ schedules such as those at Auburn, Alabama, Clemson, Florida State and Georgia Tech.

He recruited well for the Mocs, including during his final season there a wide receiver from Alexander City named Terrell Owens, though Nix left for the NFL before Owens ever suited up for him.

Chad “Chig” Martin, a 1986 Enterprise graduate who played for Nix at UT-Chattanooga, said the coach was a throw-back.

“Coach was old-school tough,” Martin said. “There was no horseplay or chitter-chatter with him. When you were at a meeting you were expected to not make a peep of noise.

“I’ve seen us about three-quarters of the way through practice when he would start practice over. He would do it two or three times sometimes. Even the other coaches were like ‘Come on.’”

“In 1986, he came to our house,” Martin said. “I went there as a tight end but moved to what he called a quick tackle.

“He was without a doubt one of the better defensive minds in the Southeast.”

Nevertheless, the NFL called. Nix first took a scouting post with Buffalo in 1993. During his first stint in the northeast, the Bills enjoyed one of the NFL’s greatest runs, a streak of four consecutive Super Bowls — 1991-94 — albeit all losses. There, he got to watch Hall-of-Fame players Bruce Smith, Jim Kelly and Thurman Thomas shine.

It would be a similar path for Eufaula native Les Snead, who left Auburn as a graduate assistant to become a scout for the Jacksonville Jaguars before becoming the director of player personnel for Atlanta and eventually general manager of the Rams — first in St. Louis and now in Los Angeles.

“I went to Chattanooga and that was the longest I had stayed anywhere, nine years,” Nix said, explaining why he maintained Chattanooga as his home. “When you go to the NFL you better have a home base because you could be going back at any time. You know the old saying that the NFL stands for ‘Not For Long.’”

Nix said he and Snead text occasionally, usually about personnel.

Nix’s career is laced with success. At San Diego, the Chargers had finished no higher than third in the AFC in the previous six seasons before Nix arrived. In a six-year stretch from 2004-09, the Chargers won the division five times.

Among Nix’s wise moves at San Diego was Antonio Gates, a tight end who was signed as a free agent “basically off the basketball court” after he went undrafted.

“We recruited the Wiregrass at Chattanooga, and normally, we kept them,” Nix said. “A lot of those guys played and played well for us.

“A lot of players came in immature and wild, but if they did what you asked them to do you get to see them leave as men.”