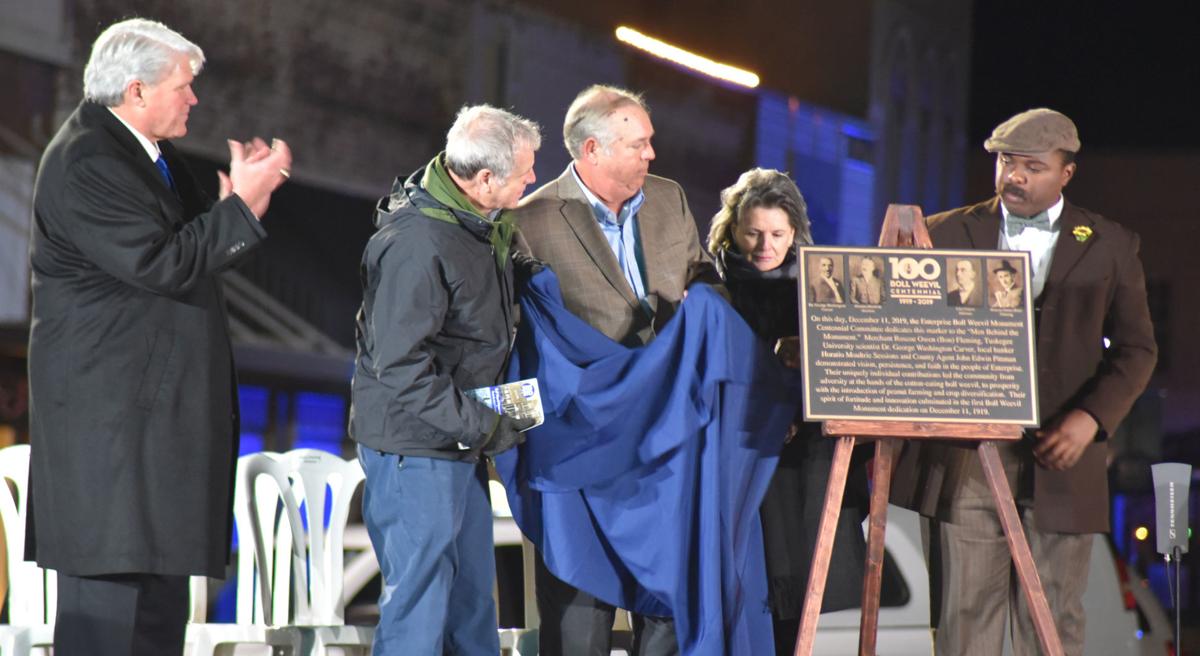 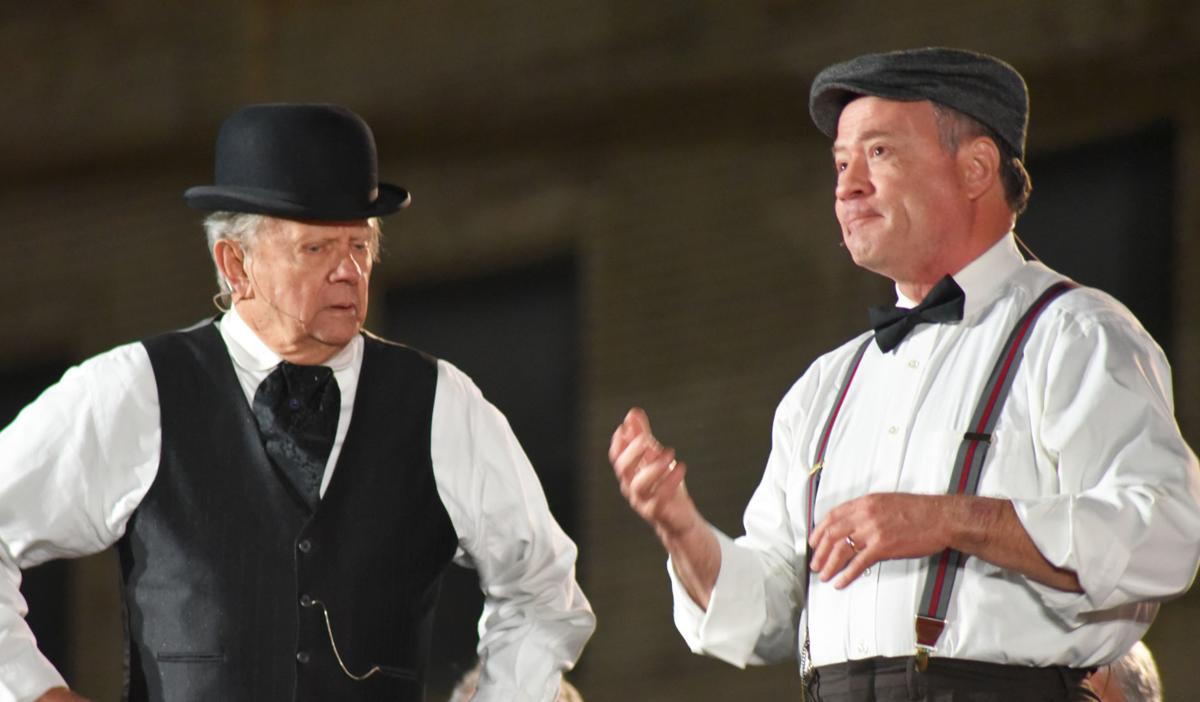 Southern Broadway actors Scotty Johnson, left, and Mike Kozlowski as Banker Benjamin Byrd and John Pittman, respectively, at the mini-play during the ceremony. 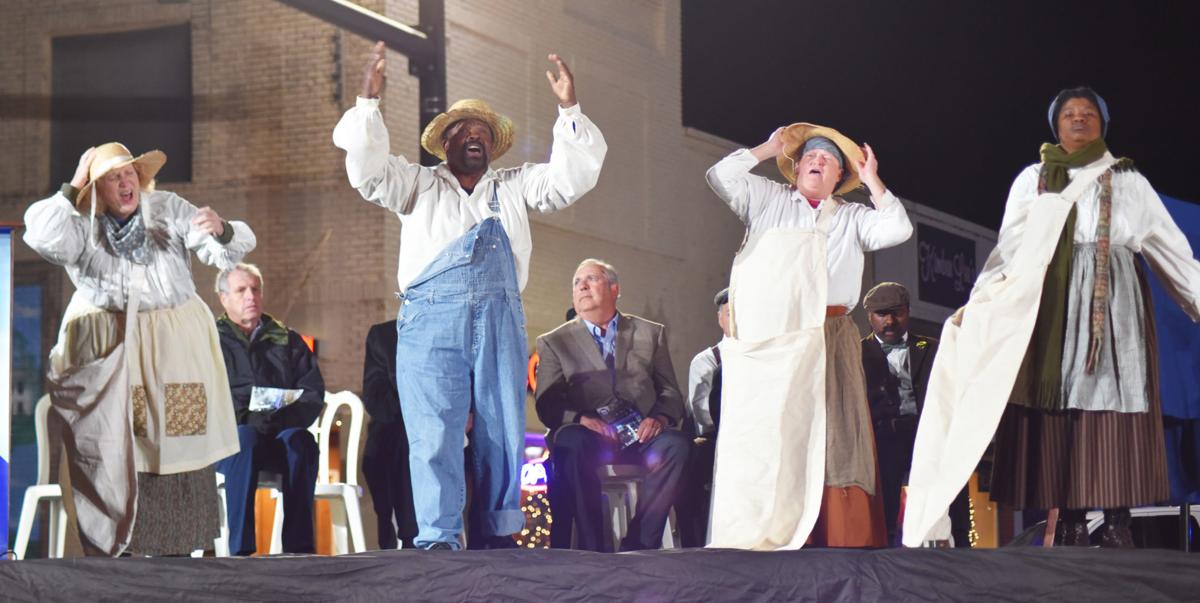 Actors from Southern Broadway Dinner theater put on a mini-play as part of the ceremony that focused on what life was like around the time the Boll Weevil Monument was built and the events that transpired leading to the monument. Pictured (from left) are Lydia Dillingham, LaPonce Harrison, Susan Gilmore and Lynetta Powell. 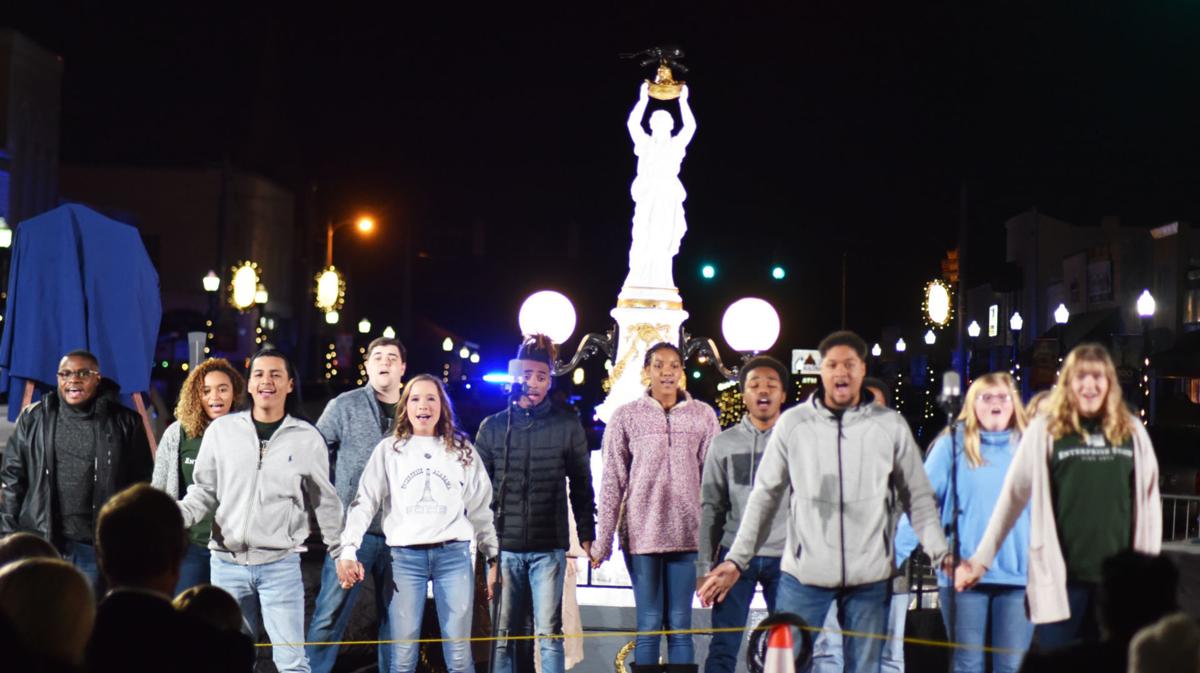 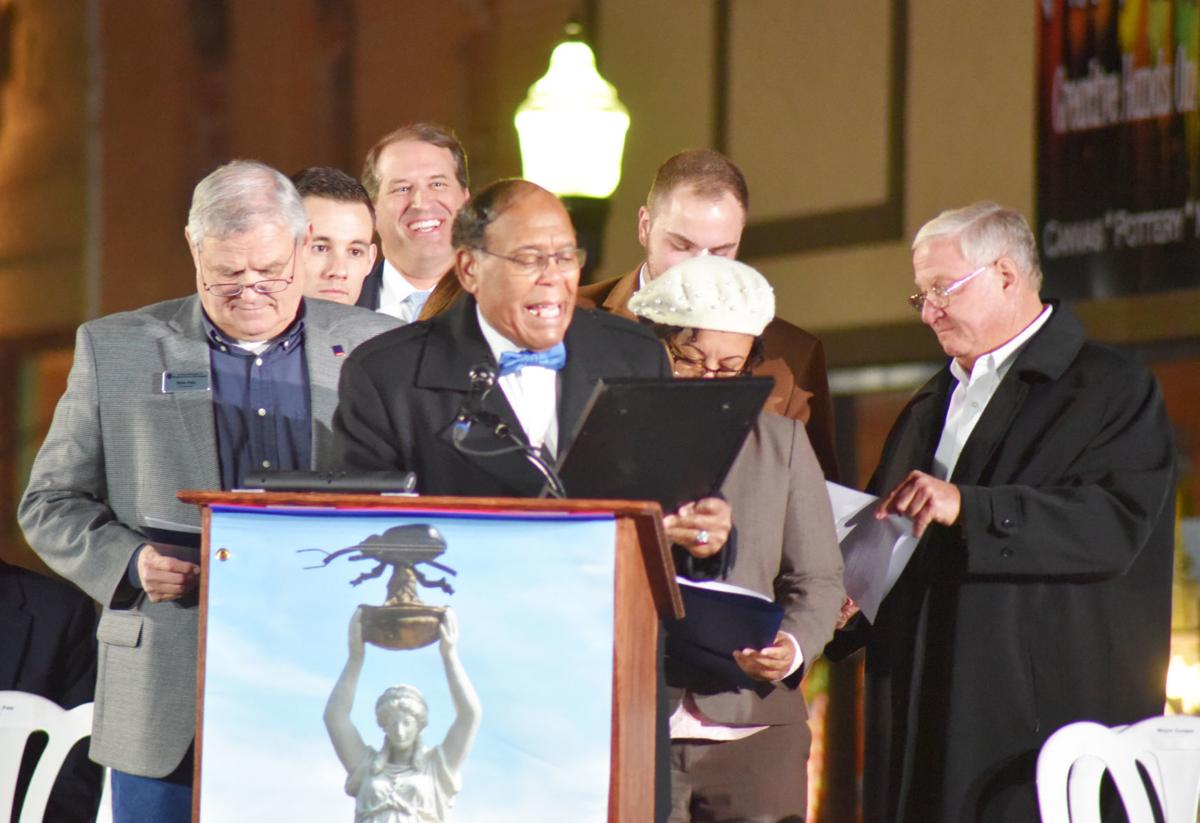 Enterprise Mayor Bill Cooper was joined by state and local officials in the reading of a proclamation for Dec. 11, 2019. 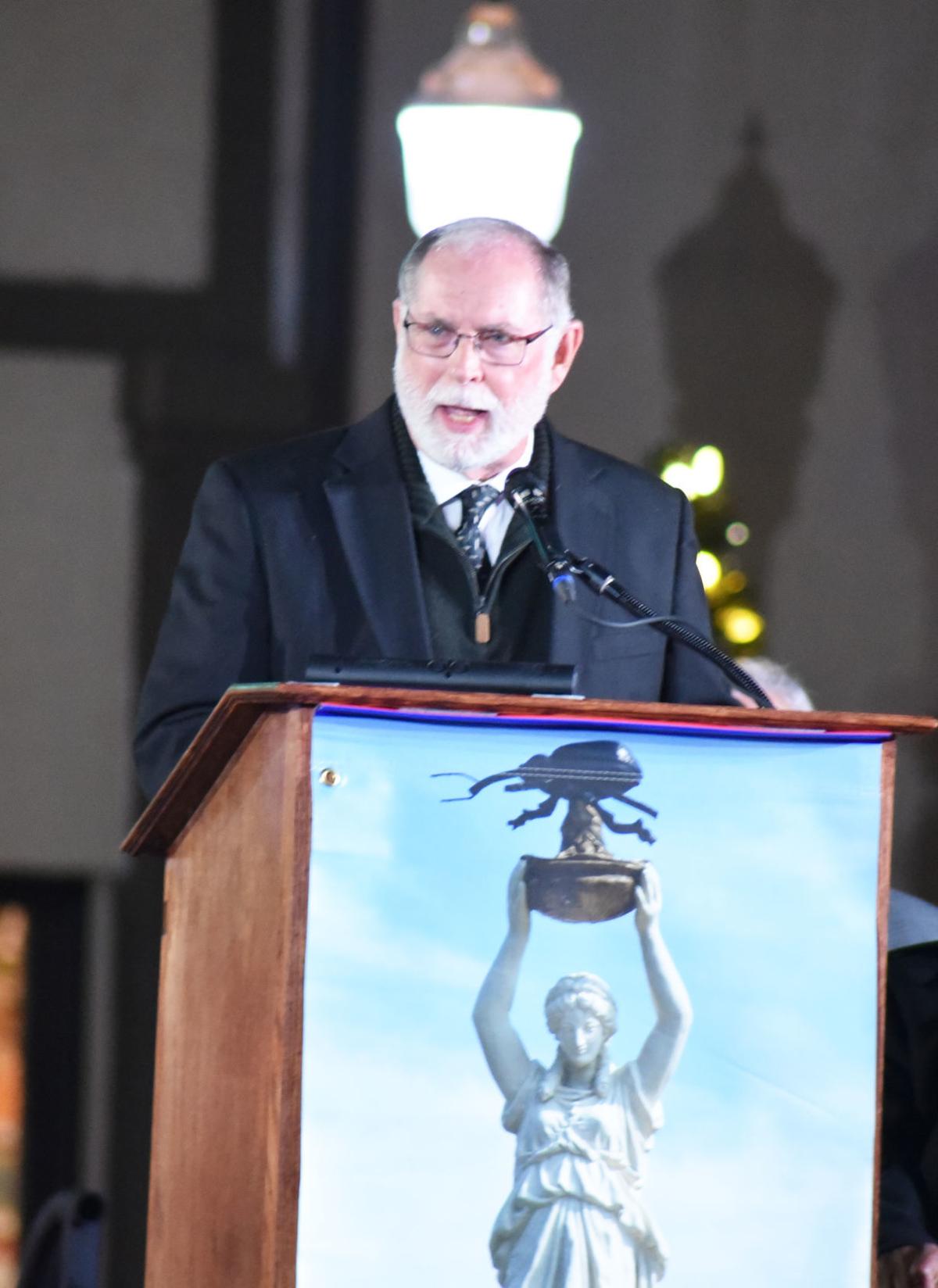 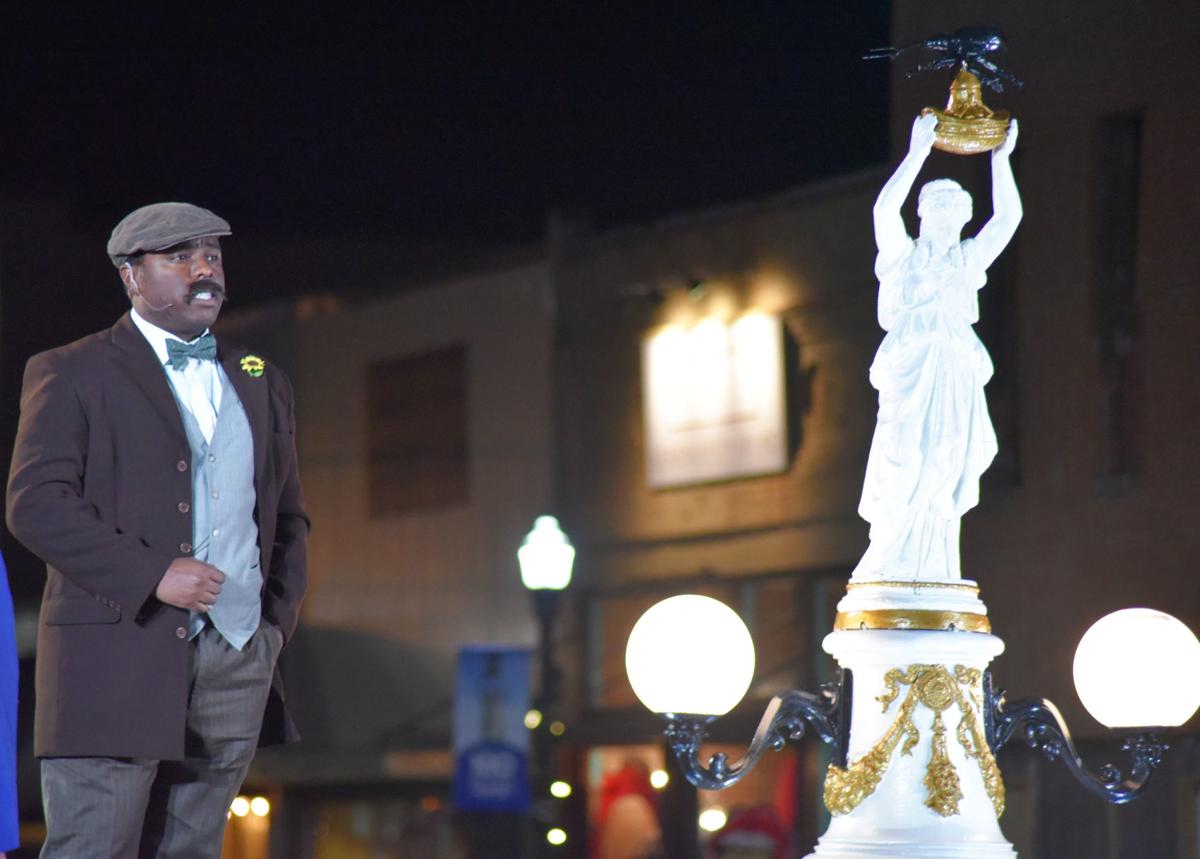 Southern Broadway actors Scotty Johnson, left, and Mike Kozlowski as Banker Benjamin Byrd and John Pittman, respectively, at the mini-play during the ceremony.

Actors from Southern Broadway Dinner theater put on a mini-play as part of the ceremony that focused on what life was like around the time the Boll Weevil Monument was built and the events that transpired leading to the monument. Pictured (from left) are Lydia Dillingham, LaPonce Harrison, Susan Gilmore and Lynetta Powell.

Enterprise Mayor Bill Cooper was joined by state and local officials in the reading of a proclamation for Dec. 11, 2019.

Downtown Enterprise was the site of a monumental celebration Wednesday featuring city and Wiregrass residents, local and state officials and a host of others paying tribute to the 100th year of the Boll Weevil Monument and its message of triumph over adversity.

Enterprise Mayor Bill Cooper reflected on the changes in the city and its growth as he spoke to attendees from beside the Boll Weevil Monument.

“Enterprise has come a long way in the 100 years since this monument was established here,” said Mayor Bill Cooper. “We don’t see horses and buggies or Model T Fords on the street anymore. We can make ice in the refrigerator in our home now instead of going down the street to the old ice house that used to be just around the corner. Transportation and clothes and cultures have really changed. The city has grown from a town of 250 when it was incorporated in 1896 to about 30,000 people today.

“Yes times have changed, but the monument still stands where she has placed herself for 100 years. It has been a constant beacon in our lives — a familiar comfort that bids farewell when we leave town and greets us when we return. It’s a tribute to what has been and what can be.”

Cooper, alongside state and local dignitaries and officials, unveiled a proclamation commending the 100th anniversary of the monument.

By the early 1900s, according to the proclamation, Enterprise was a town enjoying steady growth with the establishment of a water and electric system, a school, and the arrival of railroads and businesses, including cotton gins. By 1915, the boll weevil arrived and began devastating cotton crops and threatening the livelihood of people around Enterprise.

“People were left with little but the food they could grow and the clothes they could make,” the proclamation states. “People of Enterprise suffered a mighty blow, but they did not give up. They did not give in. People such as banker H.M. Sessions and County Agent John Pittman took the initiative to seek solutions for the economic crisis while, from a distance, Tuskegee University Scientist Dr. George Washington carver advocated farm diversification and created a market for peanuts by inventing new ways to use them.”

Sessions bought and shipped the first peanut seeds to Coffee County and convinced local farmer C.W. Baston to plant peanuts for a year. After the crop boomed, other local farmers rallied around the diversified farming concept and, according to the proclamation, one million bushels of peanuts were produced in 1917 and sold for more than five million dollars.

Enterprise and the southeast region became a leading peanut producing area of the nation, and Roscoe Owen “Bon” Fleming recognized the boll weevil’s role and significance in forcing a change. He led the effort that brought the monument to the city.

After the proclamation, Enterprise State Community College Entertainers performed two songs: “Rejoice” and “Gotta Have a Home (The Boll Weevil Song).” Actors from the Southern Broadway Dinner Theater also put on a mini-play detailing the events that led to the Boll Weevil Monument finding its place downtown, and a special tribute marker — in honor of Sessions, Pittman, Carver and Fleming — was unveiled.

Cooper and Phil Thomas declared the rededication of the Boll Weevil Monument for the ceremony and the Enterprise High School Big Blue Marching Band played to conclude the ceremony.

While the ceremony was a great occasion for the city, Cooper added that the community was still in mourning over the death of EHS graduate and recent graduate of the U.S. Naval Academy Joshua Kaleb Watson.

Watson was killed after alleged gunman and Saudi national Mohammed Saeed Alshamrani opened fire in a classroom, killing three students before being killed by responding officers.

“Even though we have lots to celebrate, we are also a sad community tonight,” Cooper said. “A community mourning a young man whose life was lost to senseless violence. We are proud of this young man, and we pledge to always remember his honor, his bravery and his sacrifice.”

Cooper led attendees in a moment of silence in honor of Watson.