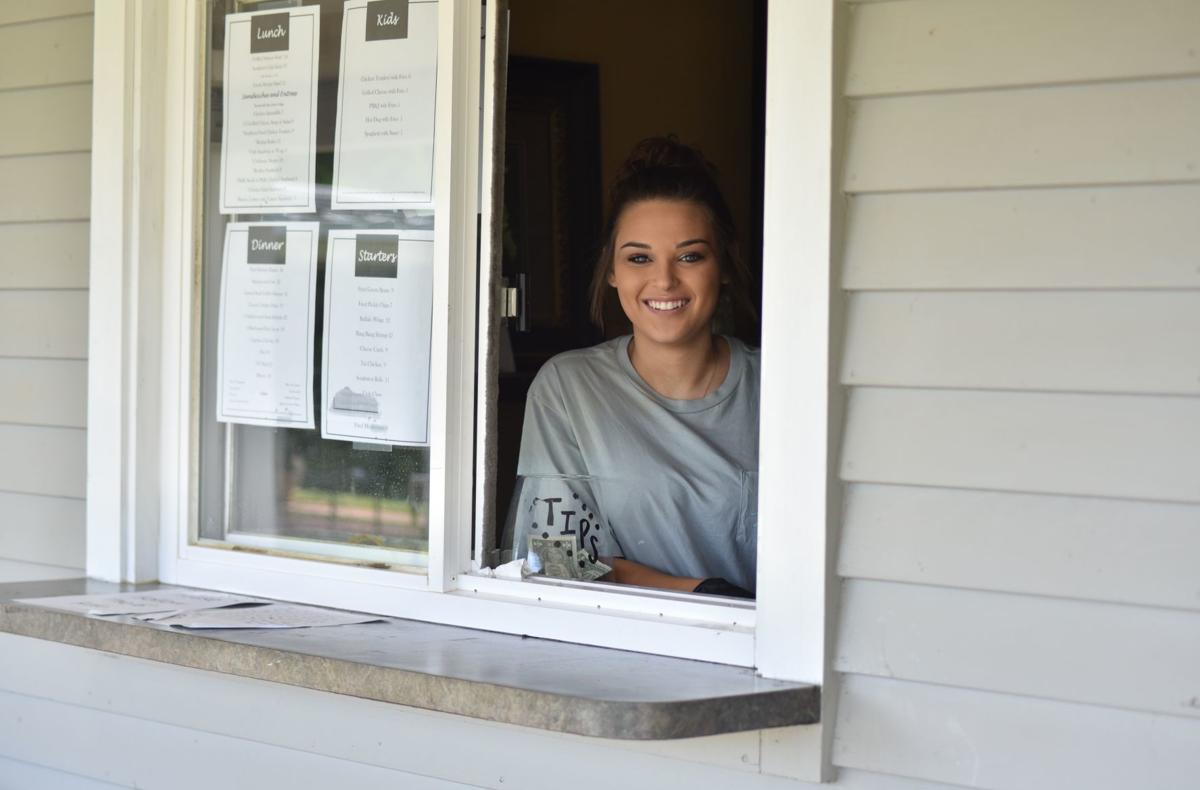 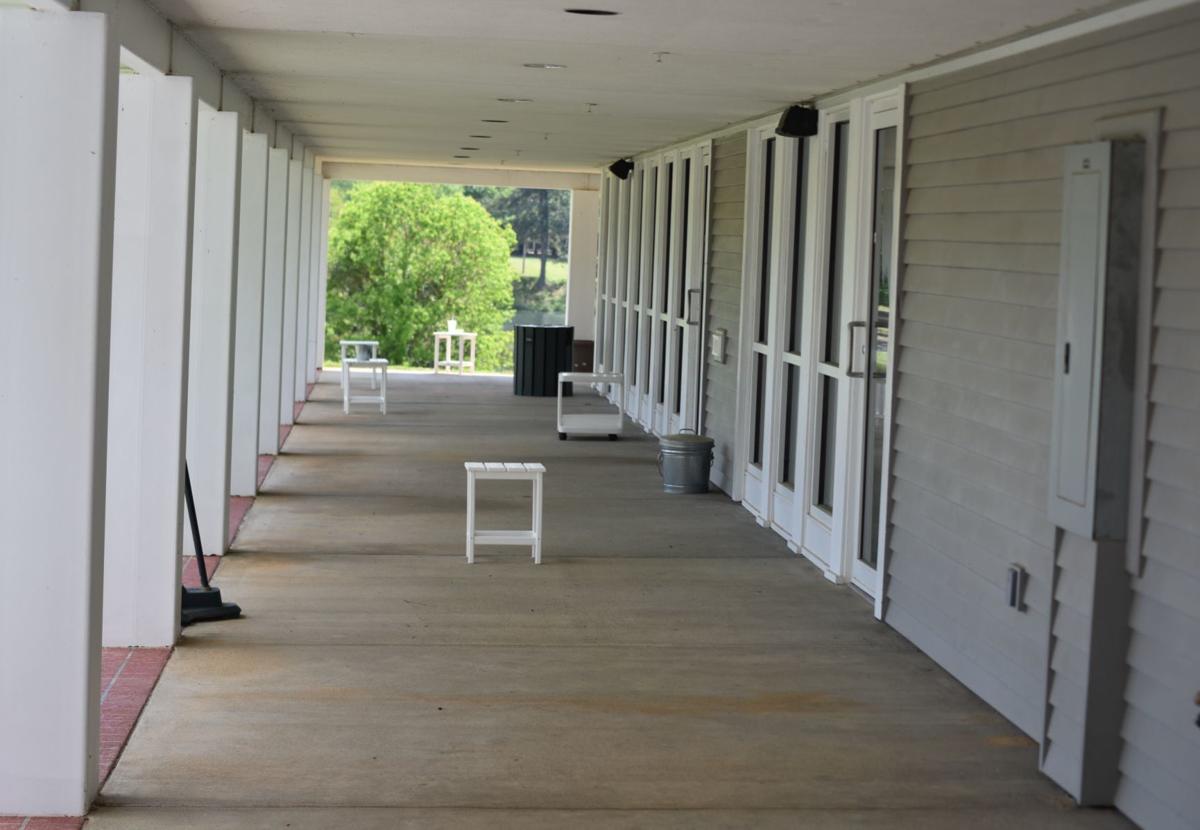 Typically, the patio area is full of tables and chairs behind the Enterprise Country Club, but they've been removed for social distancing reasons to combat the spread of COVID-19. 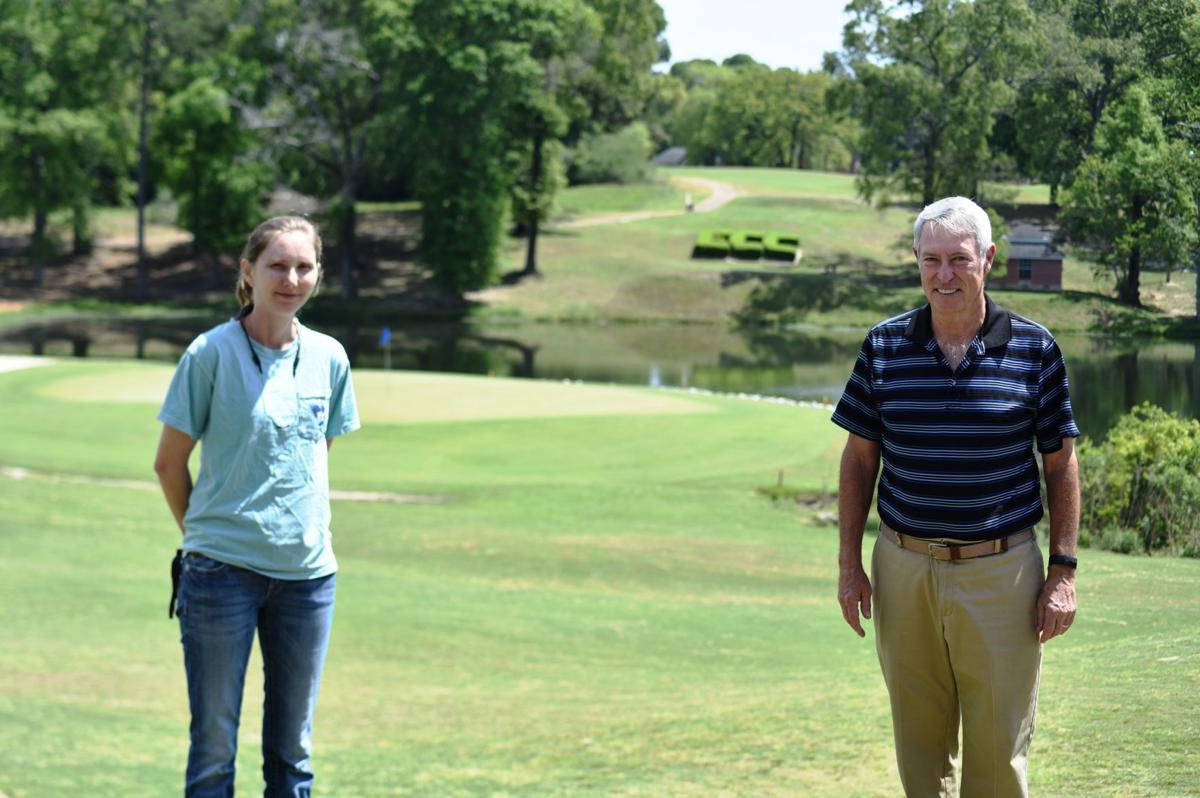 Typically, the patio area is full of tables and chairs behind the Enterprise Country Club, but they've been removed for social distancing reasons to combat the spread of COVID-19.

Play on the golf course continues, but it doesn’t take long to notice the way the COVID-19 pandemic has affected the Enterprise Country Club.

The clubhouse has been closed since March 20. The iconic white patio furniture that lined the wrap-around porch behind the clubhouse is gone.

“We tried having chairs six feet apart. But as soon as guys came in they pulled them together,” said Ken Peck, who is the president of the Men’s Golf Association at ECC. “That was one of the most recent things. It’s been gradual over time. As you hear what other people are doing, ‘Oh, that’s a good idea. Let’s do that.’

“It was mid-March when the board said lock the place down. That’s been in effect for several weeks. Fortunately, we’ve got some restrooms out on the golf course because you can’t get in to use the restrooms here.”

Susan Brewer, the pro shop manager, said even the sign-in sheets have been removed.

“I’ve been having to sign everybody when I see them walk by,” she said.

Peck, a retired general, said Friday afternoon there have been a lot of adjustments.

“Step 1 was locking down the clubhouse,” he said. “That’s unfortunate because we have a great restaurant. On Friday, that’s typically one of our biggest days for lunch. Normally, the building would be crowded with fish and shrimp specials.”

Instead, ECC has gone exclusively to a take-out window, which Peck said is doing well.

“We’re very careful with the window,” he noted. “The workers are wearing gloves, using sanitizer all the time. They’re reconfigured that room to have only one person at the window at a time. On the outside we’ve put up cones to mark six-foot intervals.”

Normally, golfers could spend time on the veranda and watch buddies come in and finish the round. “Maybe make a small wager on how the group is going to finish on 18,” Peck suggested with a smile.

But not lately. There is no place to sit after the tables and chairs were removed.

“You can come out for lunch before you play, but you can sit in your cart and each your lunch, but you can’t sit together,” Peck said.

The move to one person to a cart surprisingly hasn’t affected many.

“That’s not a big problem here, because almost everybody has their own cart,” Peck said. “We do have rental carts, but only one to a cart. That’s strictly enforced.”

The pins say in the hole at all times and golfers are asked not to touch the pins or pull them out.

“Then we put a Styrofoam donut in the bottom of the hole,” Peck said. “It’s about 2 inches thick. The ball goes in the hole, but it doesn’t go all the way down. Some courses are turning the cups upside down, but we want to see it go in the hole. It just doesn’t far down into the hole.”

Peck said on a typical day, about 25 people would be gathered around the first tee, getting ready to tee off. Now groups are limited to foursomes.

“People are going out in threesomes and foursomes,” Peck said. “There’s no high-fiving, no handshaking at the end. When you come in you usually sit down and have a beer. Well, you can have a beer, but you’ve got to maintain that spacing. You might have a “friendly” wager that we normally have. We collect that money very carefully.”

The social aspect of the game has taken the biggest hit. The impact on play, however, hasn’t been dramatic.

He added the course “is probably in the best shape it’s been in in years.” He also said the safety measures are necessary.

“We want to keep the course open,” he explained. “For me, a retired military guy, I’m at home all the time except when I come to the golf course. That’s about all you can do.”

Perhaps for that reason, Brewer said play has actually doubled on certain days and hasn’t dropped off significantly. She also said the takeout window has been busy.

“Our members are doing really good in continuing to support the club,” she said.

For that reason, the club has been able to be at or near full staffing despite the pandemic.

“Our staff, we’ve pretty much been able to maintain the staff that we have,” peck said. “Especially now that we have the Phase III PPP from Congress that’s going to help us ensure that the workers out here are able to bring in pretty much their normal paychecks.”

To be sure, the private club, which Peck said has about 300 members, has felt the absence of “big” events like weddings, reunions and other events that would have drawn a big crowd.

“We were going to have a big Kentucky Derby that would have been huge,” Peck said. “Bu the day-to-day business, the take-out wind is holding its own.”

Brewer said the driving range is closed, the water containers on the course have been removed, as have the bunker rakes, to reduce the surfaces most commonly touched.

Is it business as usual? No. But the golf course is open — and that’s a welcome refuge for a number of Enterprise golfers.