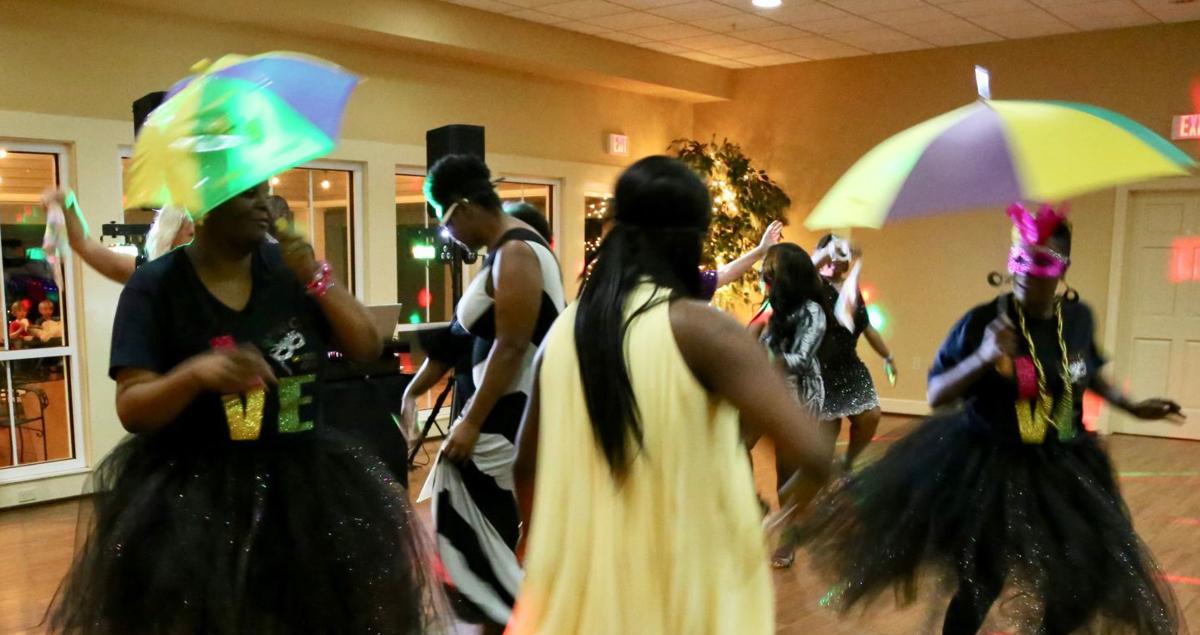 The Feb. 22 Mardi Gras Gala, featuring a New Orleans-inspired second line and held at the Enterprise Country Club, will benefit Women Who Care. 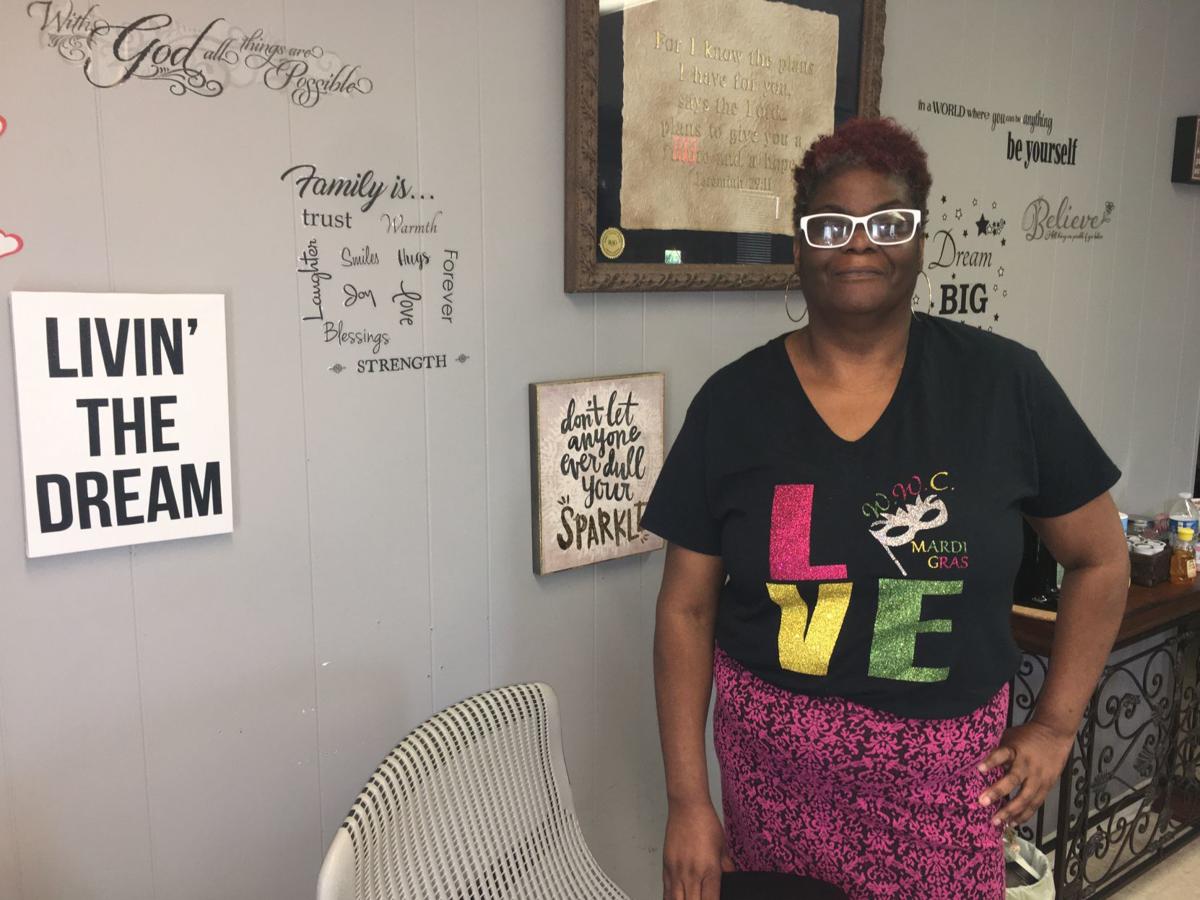 Harolyn Benjamin puts inspirational quotes all over the walls at Women Who Care.

The Feb. 22 Mardi Gras Gala, featuring a New Orleans-inspired second line and held at the Enterprise Country Club, will benefit Women Who Care.

Harolyn Benjamin puts inspirational quotes all over the walls at Women Who Care.

Even angels love a good party.

Harolyn Benjamin, the founder of Women Who Care, Inc., has scheduled her organization’s second annual Mardi Gras Gala for Saturday, Feb. 22, at 6:30 p.m. at the Enterprise Country Club.

Authentic New Orleans-themed food, music, dancing and attitude will be a big part of the large evening. Tickets are $30 per person.

“The country club is a great supporter,” Benjamin said last week. “Our menu is going to include chicken etouffee, shrimp and grits, red beans and rice, a variety of moon pies, hopefully a king cake. Then we’ll have a particular snack chip from New Orleans — Elmer’s CheeWees.

“And we always have a signature drink — with or without alcohol. Last year was a hurricane, of course. This year it’s a Mardi Gras kiss.”

Benjamin there will be a “second line” when the music and dancing provided by Joelove Entertainment eventually take over.

“The first line is the people who are conducting the parade or are part of the club,” she instructed. “The second line is all the people who kind of join in and want to be a part of it. I mean, we do Mardi Gras like nobody else does Mardi Gras.”

She does a lot of things like nobody else. Women Who Care, located at 205 Speigner Street, has a mission of changing lives through the power of One person, One family, One community at a time. The group has a boutique that can provide outfits for work or job interviews.

Benjamin, a California native, founded the organization in 1996, when she was a New Orleans resident and saw the amazing contrasts — vast wealth and horrific poverty — of that city.

“I had seen the condition of the housing developments and thought why isn’t anybody doing anything?” Benjamin said. “It sounds weird, but I couldn’t understand that these were mostly African-American people in a city that was almost all African-American council people with an African-American mayor, and yet there seemed to be no help. And what I began to get was a backlash because I was helping.

“I realized very quickly but there it — and I hate to say it — for some people there is money in helping those who can’t help themselves. I didn’t want to be that. I didn’t want the people who walked in our doors to be another number. I was too crazy to know you couldn’t cut cards out of construction paper and hand them out to people.”

She founded a place where women could come and get help — maybe acquire some job skills training or employment opportunities — dealing with various issues like a disaster, domestic violence, homelessness, jobless. She said the goal is to make their journey a little lighter.

As the organization was finding a foothold, she contacted Les Brown, a renowned motivational speaker and philanthropist. Brown gave her permission to use his information in her program. Another New Orleans icon, Ruth Fertel, eventually learned about Benjamin and called her.

“She had a real husky voice,” Benjamin said, laughing at the recollection. “She said, ‘What are you gonna do?’ I said excuse me? She said, ‘Are you gonna let them run you out of the city?’

“Most people don’t know Ruth’s name, but they’ve eaten her steaks at Ruth’s Chris Steak House. You have individuals like that who come on board early on and they see what you’re doing and the value in what you’re doing. They’re there to spur you on. It was a blessing.’

She kept growing. Benjamin was asked to be on the Louisiana Task Force for Welfare Reform and went to work.

“I felt like if we were going to do this type of reform we really could not put everybody in a hotel as a cleaning person. That if we were going to spend $4,000 on a training program let’s have some of these agencies teach these women how to become entrepreneurs,” she said. “Sen. Mary Landrieu loved the idea and became a real big supporter. All these things were happening — and then Katrina happened.”

Initially, she felt her organization would be washed away. In fact, she evacuated to this area since she had family in Geneva.

“I eventually realized it helped us become bigger in the dreaming department,” she said. “I’ve always said you have to have dreams. If you can dream it, it can happen. … I think that has been what we’ve stood on for 24 years now. It’s possible. You take a little engine that could — we had no funding, no grants — and help to change people’s lives? It’s amazing.”

Women Who Care has helped 629 people at its Enterprise location since May, and 297 in that time at its second location in Elba that opened about a year ago.

“I never want to be the person who does the Band-Aid approach,” she said. “I give you food, but if I don’t teach you how to provide for yourself or your family what have I really done?”

Which is why the gala is crucial.

“A lot of people may or may not realize we have a full-fledged boutique,” Benjamin said. “It started out just giving women an outfit to go and do an interview. It has turned into much more than that. It’s been a blessing, it really has.”

April’s Boutique, which is located at Women Who Care, is a room of new and gently used clothing and accessories.

“I had a lady come in who was offered a job at a bank and was going to decline it because she didn’t have clothes,” Benjamin said. “We had her come in get everything she needed. She sent me a picture of her on her first day.”

Her guests often are those with extra challenges — maybe drug addiction, maybe prison or, as Benjamin said, “maybe, maybe, maybe.”

“We’re on Facebook, but a lot of our guests hear about us through word of mouth. We’re very blessed that a couple churches have started supporting us,” Benjamin said.

“Growing up in Los Angeles with an abusive stepfather, I know what it’s like to be broken, to have no self-esteem, to not feel like anybody’s got your back. I want to be that person for other people.”

Kristin Roy is brave. She’s a former guest of Women Who Care and eagerly tells her story in the hope that it helps the organization or prompts someone like her to seek its help.

“I was a drug addict. I was an IV drug user,” Roy said. “I made an appointment to see Ms. Harolyn. The day I went I felt nothing but love and compassion from her. She listened to my story. She cried. She was just an angel.

“I had been to interview that morning and had a second interview the next day. I told her nervous I was. Coming back into the world, you know, people see you different. She said we’re going to have you fixed up and you’re going to be fine.

“She asked where I interviewed and I told her. She said I know him. She called him and talked with him. I got the job. She fixed me up with outfits for the second interview and made sure I had clothes to work in. She’s been there since Day 1. She or her husband will come by the store and see how I’m doing.”

Roy said Benjamin has helped and knows she’s helped others.

“Just for me to know I have her as part of a support system, that means more than anything material-wise she could give,” she said. “I know there’s got to be others like myself who are out there. Maybe they don’t have somebody like Ms. Harolyn.”

Benjamin, unaware of Roy’s comments, said, “It’s great to know you were a cheerleader for somebody when they could not cheer for themselves. I think that’s what we do.”

So it’s Gala time again. The inaugural version last year was so fun she said people were already asking about 2020 two weeks after last year’s party.

“We’re not going to have a silent auction this year,” she said. “But we’re still going to have a drawing and we will crown a king and queen of the gala. I think the people who came enjoyed it.”