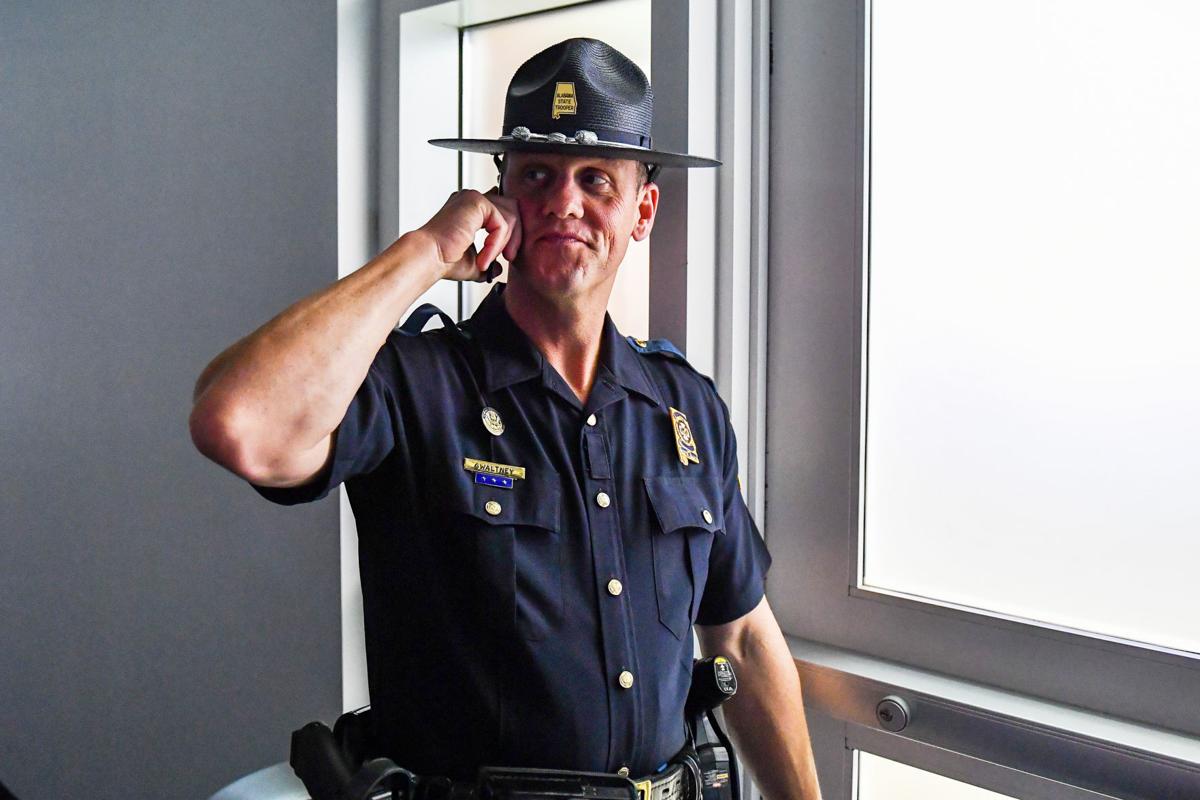 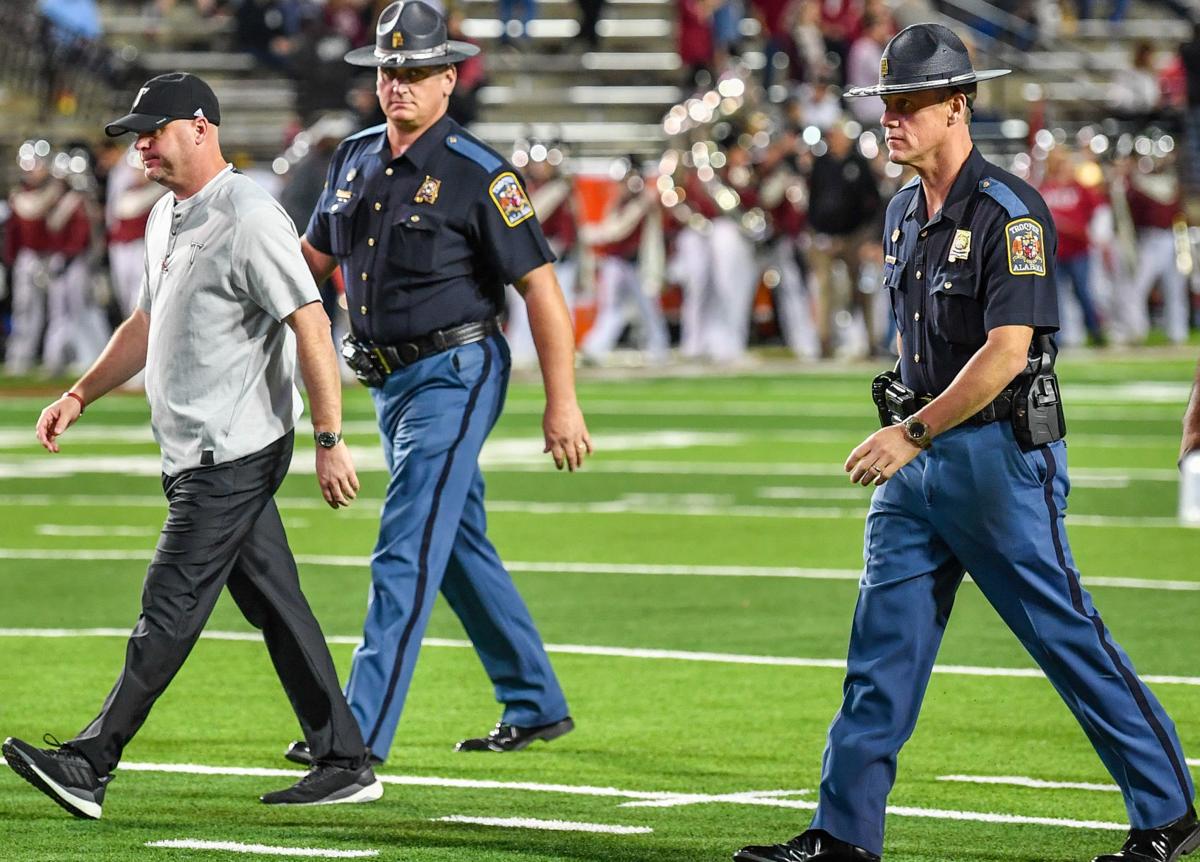 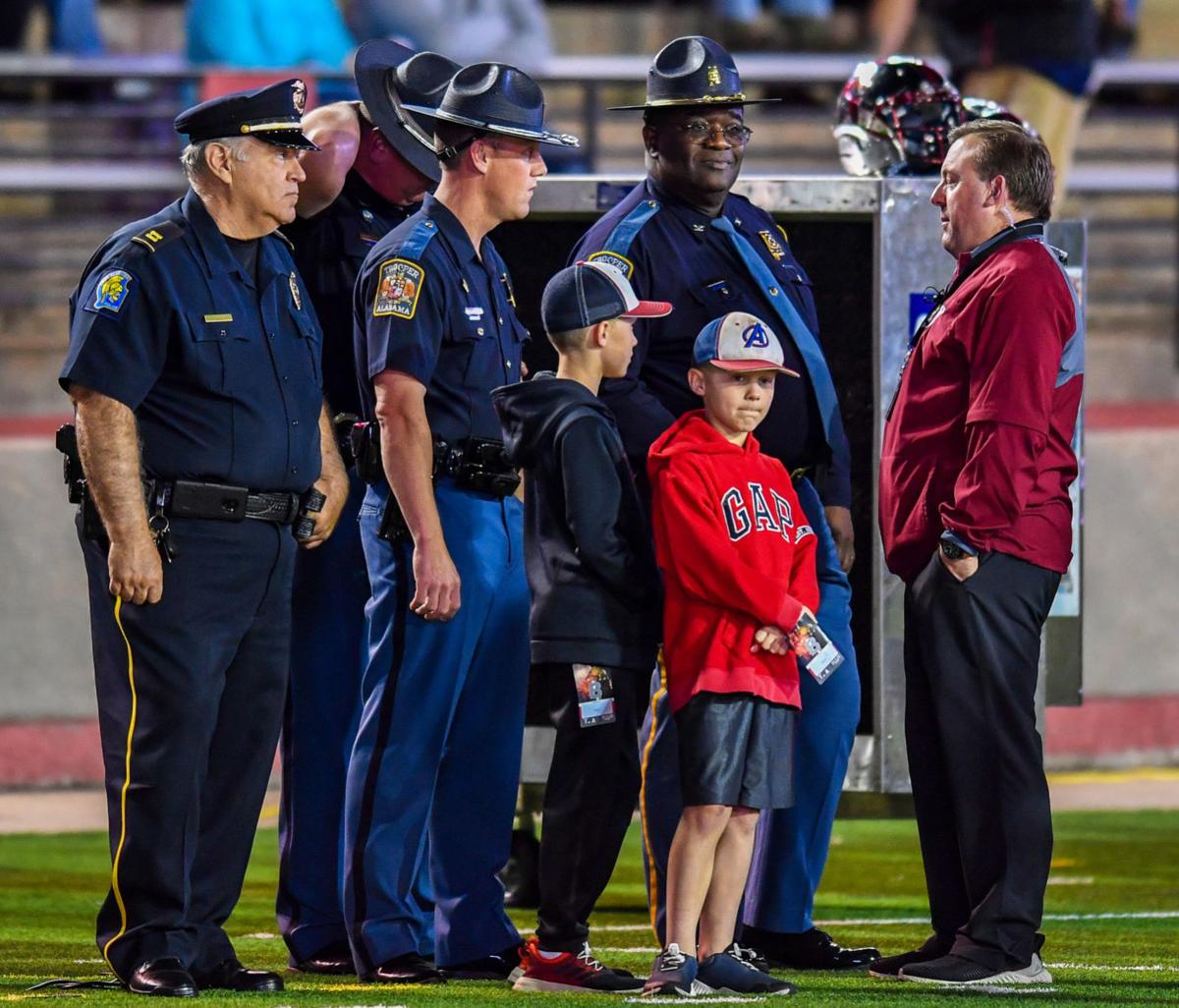 Trooper Brock Gwaltney (second from left with his sons Griffin, 10, and Grady, 7) said he will miss the relationships he built at Troy with the escort detail over the past 15 years.

Trooper Brock Gwaltney (second from left with his sons Griffin, 10, and Grady, 7) said he will miss the relationships he built at Troy with the escort detail over the past 15 years.

TROY — Senior Day always brings emotions and memories for every player about to do what he’s loved for the final time.

It doesn’t apply just to seniors — or even football players.

Alabama State Trooper Brock Gwaltney of Enterprise has spent the past 15 seasons working the detail that provides security for the Troy Trojans and their head football coach.

Friday’s season finale at home against Appalachian State was the final game for Gwaltney and Trooper Danny Barnes, who has worked with the detail for 10 years. Gwaltney has led the detail for the past five years.

“Doing this, man, has been great,” Gwaltney said. “We’ve met a lot of people. We’ve been able to do it for three coaches — coach (Larry) Blakeney and Neal Brown and now Chip (Lindsey). They’ve all been really good to us.

Griffin, 10, and Grady, 7, were standing near their father as he talked before last Friday’s game against Appalachian State.

“I’ve been doing this longer than they’ve been alive,” he noted.

The Opp native had a connection that got him into detail.

“My high school coach was Shayne Wasden,” Gwaltney said. “He was up here as an assistant coach when I graduated from the trooper academy. He asked if I’d ever thought about being an escort for the team. I had never thought about it, but I thought I might enjoy that. That’s how I got started.

“I started as an alternate, just coming whenever they needed somebody, then worked up to the visitor side and then all the way up to the home side. I’ve been fortunate enough to be the detail leader for five years now.”

There is a misconception about what the troopers do.

“A lot of people think you show up and watch a football game,” he said with a smile.

There is much more than clearing the way for the postgame handshakes between the head coaches. The detail — comprised of four main troopers and an alternate — is a team. There is a time commitment that goes far beyond the three hours from kickoff to the end of a game.

Just Friday, Gwaltney’s day started around noon for the 5 p.m. kickoff, and ended long after the game ended around 8:10 p.m.

“These guys that do the visiting team got here earlier,” he noted. “They have to get the team from Montgomery to here. We pick up coach (Lindsey) at his residence. Then after the game we get him to any kind of press conferences or meetings he needs. Then we carry him back to his residence.

“It’s not just during football season, it can be offseason, too. If the coach needs to go to a speaking event, we carry him.”

The logistics for an away game are more demanding. The four-person detail has a role for everyone. Two officers stay with the team and escort them from the school to the airport and get on the plane. The other two are already at the game site.

“An away game can start as early as Monday, leading up to that weekend,” Gwaltney said. “You have to make contact with all the assisting agencies of where you’re going. We carry a patrol car to every game we go to. We go out and do the advance work there.

“We advance the hotel, the airport, the school. We run all the routes, to make sure the routes are what they need to be so when the team does arrive on Friday, all they need to do is get on the bus and go.

“Then when the game’s over with, we put the team back on the plane, they fly home and the two officers will escort them home from the airport. We spend the night again and drive home the next day. It’s a lot of work. It’s fun, though.”

Asked about one particularly memorable trip, Gwaltney and Barnes both said, “The drive to Idaho.”

They didn’t offer to — and didn’t have to — expound on that answer.

Gwaltney mentioned the 2017 win at LSU as a game that stands out.

“We had been there several times and had them on the ropes in the past,” he said. “We had them 31-3 that one year (2008) and let it slip away and got beat. But winning over there, you know how big of a game that was. That was big for all of us.”

Gwaltney said each of the three head coaches he worked with — the legendary Blakeney, Brown and now Lindsey — are tremendous people. He still laughs at run-ins with officials.

“We’re at Nebraska and we had several calls that were not going our way,” he said when asked about Blakeney. “At halftime, at Nebraska, the officials’ locker room is in a hallway which leads to the visitors’ locker room.

“He went in the officials’ locker room and was giving them up and down the road. We finally had to say, ‘Hey, we’ve got to get out of here, coach.’ It’s a funny one. He was so good to us.”

Gwaltney was close to Brown.

“Let me tell you this about Neal: Neal’s probably the most caring person you’ll ever meet. He’s the most giving person,” he said. “He doesn’t care who you are, he was willing to always do stuff for others more than himself. That’s what I remember about Neal.”

Brown could also run hot during a game.

“I remember him coming up to me at halftime and saying, ‘Don’t let me get crazy,’” Gwaltney said. “I said, ‘We’ll be right here with you.’

“Me and Neal became more friends than a typical coach/security escort. We did things together in the offseason. We still speak once or twice a week. As a matter of fact, he texted me yesterday — happy Thanksgiving, how’s the family doing, that kind of thing.

“He still pulls for Troy. He wants Troy to succeed. He’ll shoot me a text, ‘Good luck today, hope you guys get a big win.’”

Lindsey just completed his first season as head coach of the Trojans.

Gwaltney said they were walking off the field at Louisiana — a nightmarish 53-3 loss — and Lindsey told him, “I haven’t had my tail whooped like that since high school football.”

“Chip’s a good guy,” Gwaltney said. “He will do a really good job here.”

Gwaltney will still keep coming to games, along with his sons and wife Trista, who teaches at Enterprise High School.

“She comes to a lot of the games. She’s looking for us to come up here and enjoy the games as a family,” he said.

Gwaltney said among the things he’ll miss the most is developing relationships with the players.

“They are good kids. People don’t realize some of these kids grew up in some really tough towns, tough areas and maybe their only interaction with law enforcement hasn’t been good. All they’ve seen is somebody goes to jail,” he said.

“Being around them, they see that we’re just as human as they are. They’ll cut up with us and they have a good time. That’s memorable to me. Jamaal Smith (Director of Player Development) told me I never liked law enforcement — and didn’t know any until I met you guys and realized, ‘Hey, you guys are normal.’

“It’s been a pleasure to be here. The people here are amazing — the staff, coaches, players. That’s what I’ll miss more than anything.”

Gwaltney served in the Coffee County trooper office for years until June 1. He is an instructor at the trooper academy in Selma.

“I still live in Enterprise. We didn’t move. I drive up there and stay 2-3 nights a week,” the corporal said. “I really like teaching.”

He is looking forward to spending more time with his boys and his wife.

“I don’t want to leave. I don’t. But I know the time is right. My kids are older now and they’re really involved in a lot of activities. That’s the most important thing,” he said.

“I’m going to miss it. I got to be a part of all these championships. Been with them from 2005 to every Sun Belt championship, the bowl games. It’s been good.”