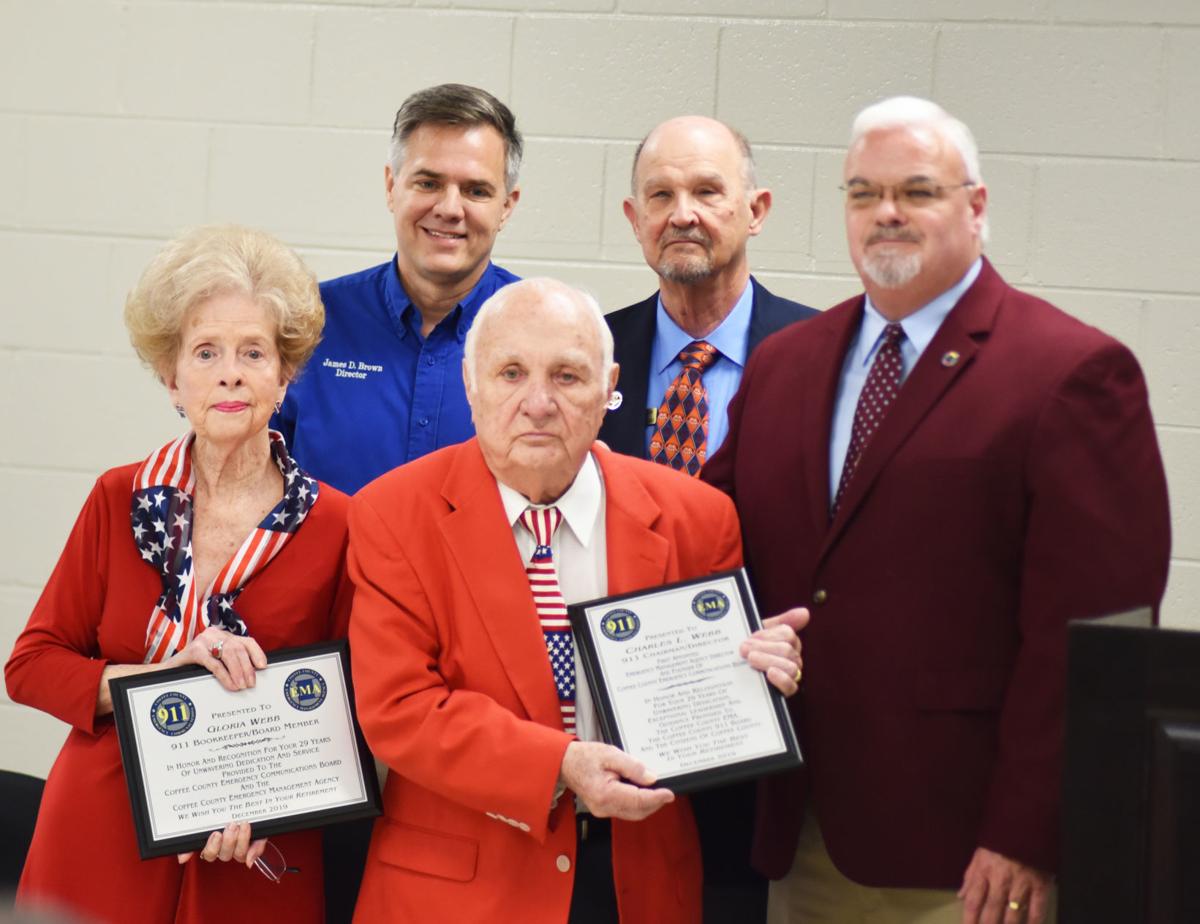 Gloria and Charles Webb were honored at a special ceremony and retirement recognition. After years of service to the county, the couple retired in July. Their ceremony was delayed due to Gloria nursing back to health after a fall earlier this year, according to E-911 Chairman Dean Blair. Pictured are (front row, from left) Gloria Webb, Charles Webb, Blair (back row) EMA Director James Brown and E-911 Coordinator Marvin McIlwain. 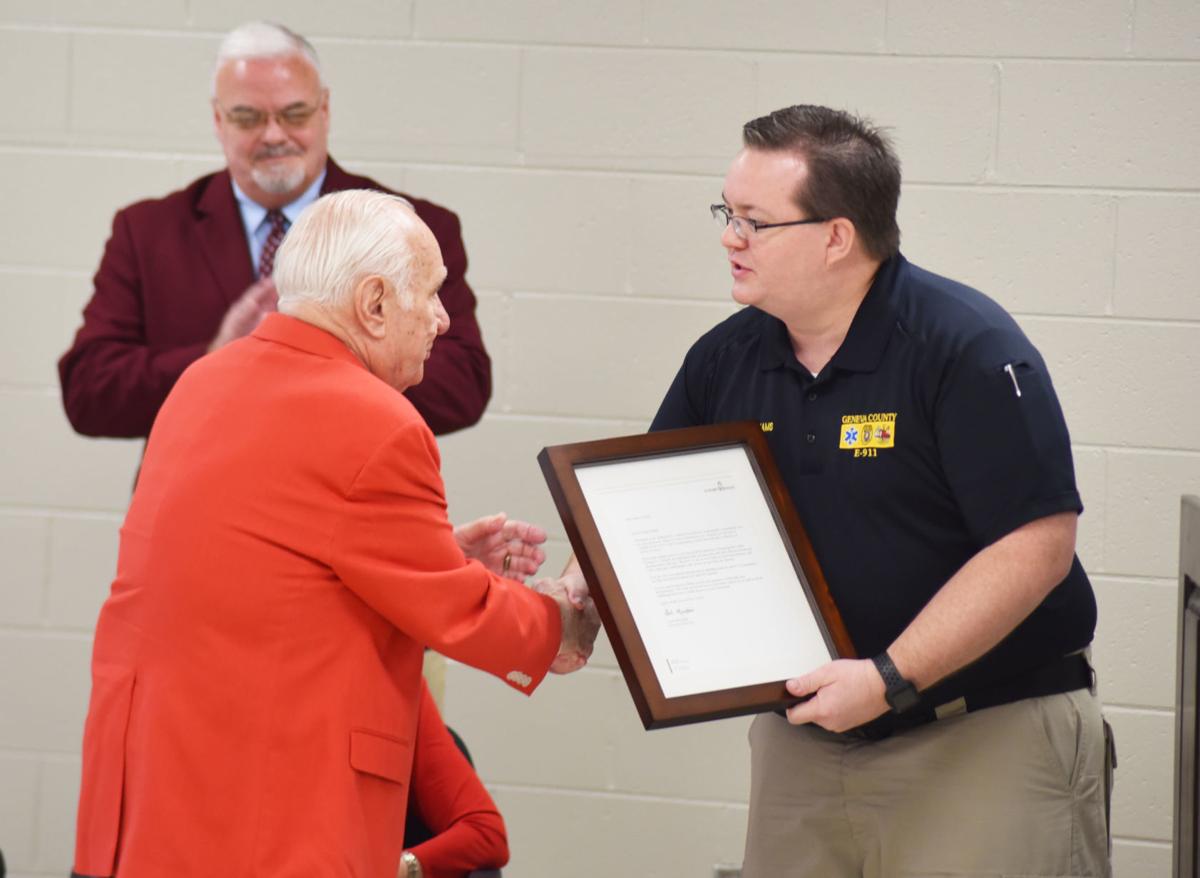 Geneva County EMA Director Jeremy Williams, also representing the state's 911 board, presented an award to Charles Webb to recognize him as a "valuable asset and longstanding fixture that embodies a lifetime of service."

Gloria and Charles Webb were honored at a special ceremony and retirement recognition. After years of service to the county, the couple retired in July. Their ceremony was delayed due to Gloria nursing back to health after a fall earlier this year, according to E-911 Chairman Dean Blair. Pictured are (front row, from left) Gloria Webb, Charles Webb, Blair (back row) EMA Director James Brown and E-911 Coordinator Marvin McIlwain.

Geneva County EMA Director Jeremy Williams, also representing the state's 911 board, presented an award to Charles Webb to recognize him as a "valuable asset and longstanding fixture that embodies a lifetime of service."

Retired Col. Charles Webb and wife Gloria were honored during a special ceremony and retirement recognition at Monday morning’s meeting of the Coffee County Commission.

Webb was instrumental in the county’s current — and unique — structure for emergency services, according to EMA Director James Brown and E-911 coordinator Marvin McIlwain.

“We couldn’t be where we are today without the foundation (Webb built),” said Brown. “He built an organization that was dedicated to service, and that’s the first thing I think of when I think of Charlie — service.

“Many people in EMA throughout the state call me all the time, because there’s only two boards in the state in two different counties set up the way Charlie decided to set this up, and everybody’s jealous. We work for a board of the mayors and the county commission, and with that we’re owned by everybody. That’s a good thing, because we don’t have loyalty to any one person. We help everybody.

“Without Charlie’s foundation, we would be seen as a county asset or city asset, but instead we’re seen as a whole asset for everybody.”

McIlwain said the unique set up for emergency services has proven effective in the past.

“Where a lot of communities have gone out and built these central dispatches, we didn’t do that,” said McIlwain. “It was proposed. In the end, what we did was we used our two established dispatch centers in Elba and Enterprise, primarily the largest ones in the county, and we set it up so that one essentially handled one part of the county and the other handled the other half.

“The beauty of the whole system is this: We built two systems that mirrored each other. If one goes down, the other one takes right up without missing a beat. That has been tested during the well-remembered tornado that hit Enterprise. It worked, and we’re very proud of that fact.”

McIlwain joked that he “waited to be an old man to get the best job and best boss man (he’d) ever had.”

“Charlie just told me what he wanted and what he expected and he left me alone,” McIlwain said. “He said, ‘What I want for the people of Coffee County is when they dial 911 and they need help, I want to be able to give it to them, whether it be fire, law enforcement or ambulance.’”

Blair said Webb’s “entire life has been dedicated to helping people” and provided some background on his life of service.

“Mr. Webb went to school to be a pharmacist,” Blair said. “He completed that and was employed as a pharmacist for a short period of time before he was drafted by the military in what would become a very lengthy and fulfilling career. He says if he had to do it all over again, he would do it just like that.”

After joining the military, Blair said, Webb decided to enter the Air Ambulance Program. He graduated from flight school in 1960 and was sent to Korea as an air ambulance pilot. Among his tours of duty were two in Vietnam.

In January 1967, Webb’s helicopter was shot down in Vietnam and fell approximately 125 feet, injuring Webb’s face and spine. After being transported back to the United States, Webb spent six months in the hospital recovering.

Following his tours of duty, Webb went to graduate school at Baylor University to earn a degree in hospital administration.

After retirement, he worked in administration at Southeast Alabama Medical Center until July 1990.

“Then, of course, something happened over in Elba,” Blair said. “We were dealing with the flood. At that point in time, we didn’t have an EMA director or anything along those lines, and the state basically said we had to have an EMA director if (we wanted) to continue getting funding.”

Webb was selected from 43 applicants.

Blair said Gloria was working alongside him through everything.

“While they were part of this 911 board doing all the work they did, Mr. Webb never accepted a salary from the board or the commission as 911 board chairman or director of 911,” Blair said. “Neither did his wife. I don’t know how we can say more about these two individuals.”

Several community members and dignitaries were on hand for the ceremony.

“Back in 1974, I entered flight school here at Fort Rucker and I was commissioned in the Medical Service Corps to follow in the footsteps of many, many heroes,” Sutton said. “I got assigned to Fort Hood, Texas. I was then to meet my boss — a lieutenant colonel named Charles Webb.

Enterprise police Chief T.D. Jones said it was an honor to work with Webb and know him over the years.

Webb himself said some of the stories shared at the ceremony about him were “probably greatly exaggerated, but greatly appreciated by both me and my Gloria.”

“She was with me all the way,” Webb said. “One of the good things that I had that a lot of people don’t have in their working careers is (I) don’t just work with people — some of them are friends.

“I just thank my wife for putting up with all of this.”

Said Gloria, who has been bookkeeper and board member for 29 years, “It was an easy job.”