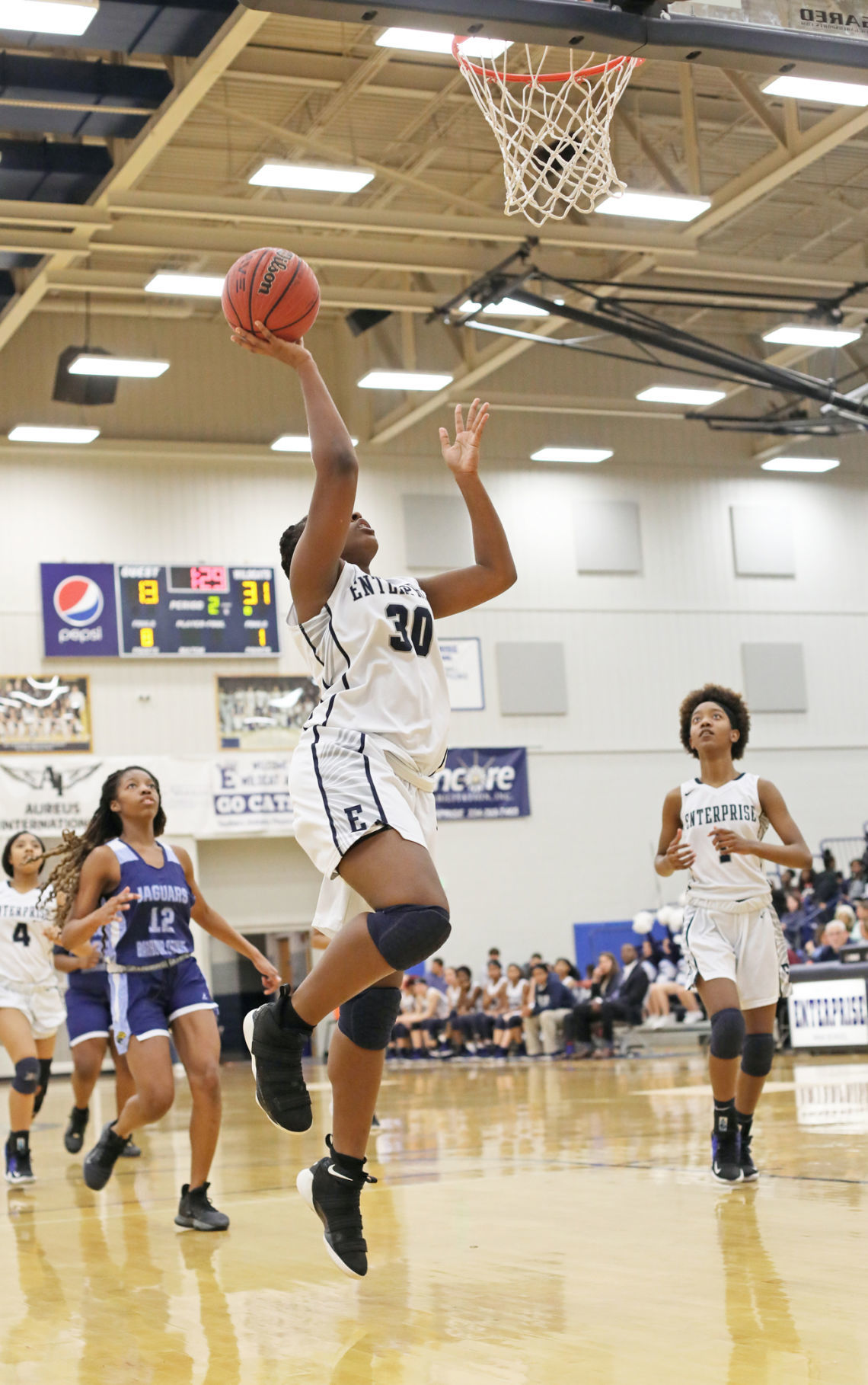 Jaida Gosha scores two of her 15 points -- 14 of which came late in the second quarter -- during Enterprise's victory over Barbour County on Thursday night. 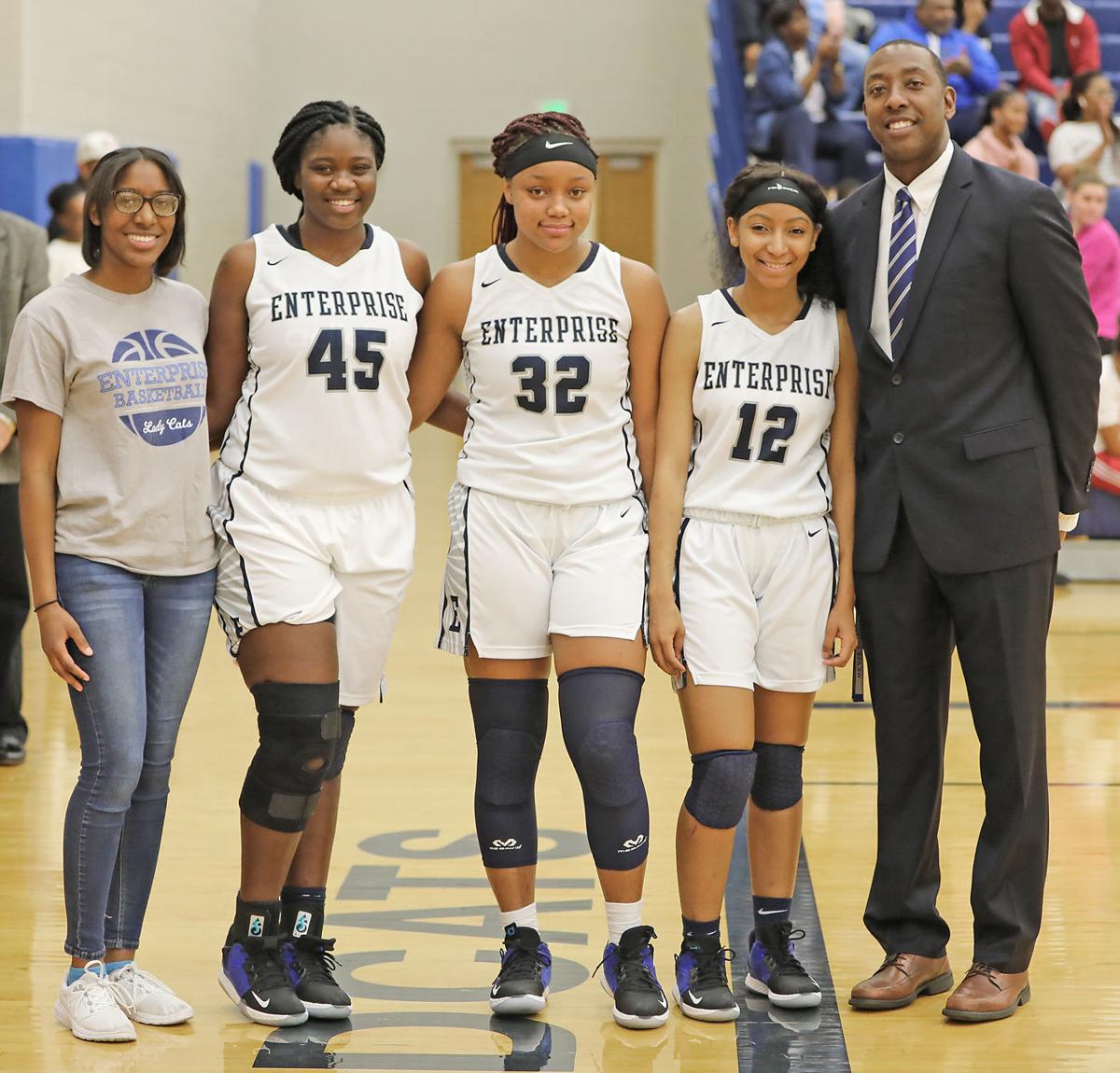 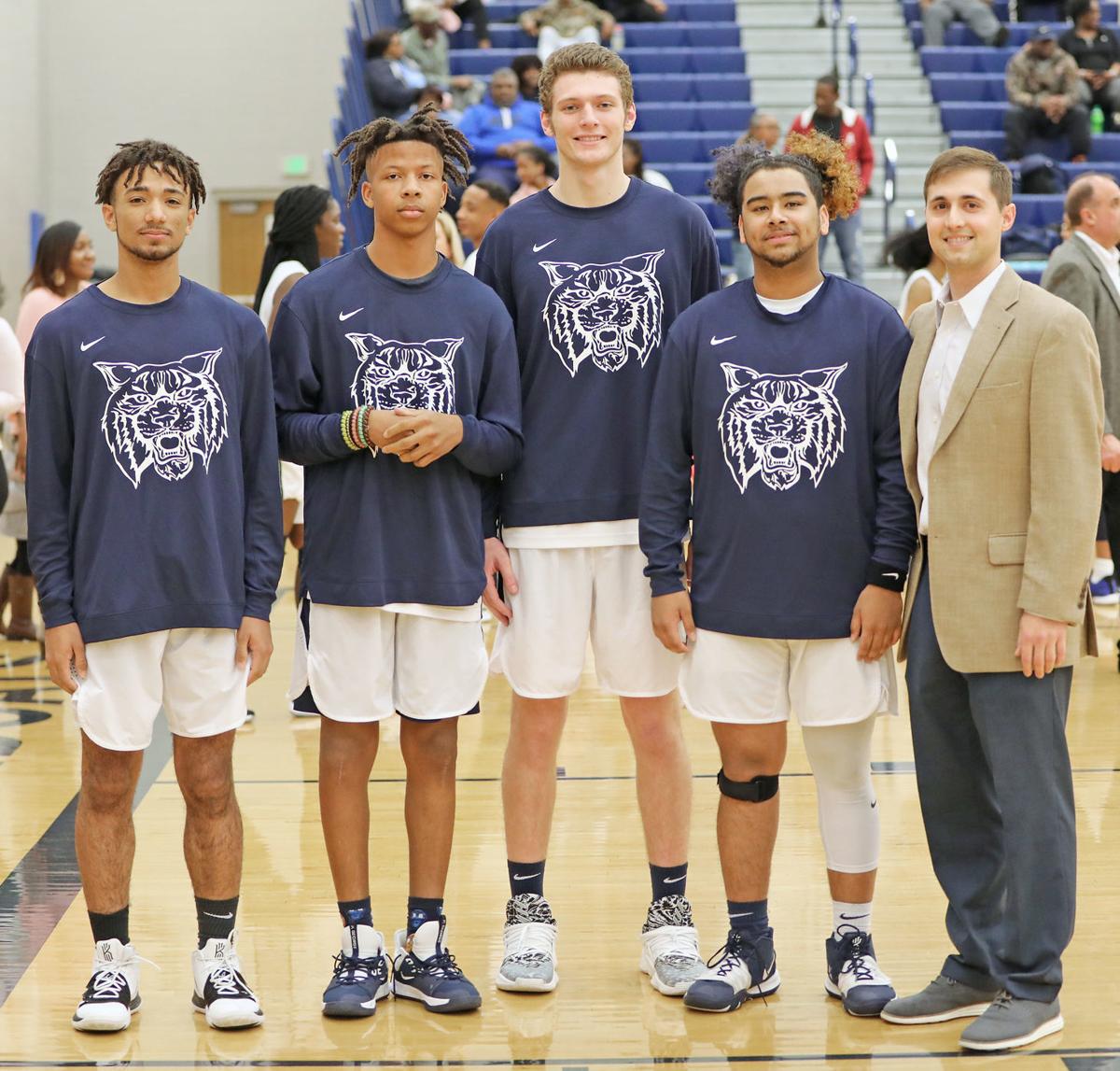 Jaida Gosha scores two of her 15 points -- 14 of which came late in the second quarter -- during Enterprise's victory over Barbour County on Thursday night.

Enterprise senior Alehzia “Lay Lay” McClain scored seven of her team’s first eight points and led the Wildcats with 20 points. The next two leading scorers, both sophomores, came off the bench. Jaida Gosha scored 15 points — 14 of which came in the final 4:05 of the first half — and Serrenity Page added 12 points.

The outcome wasn’t in doubt. EHS jumped out to an 8-0 lead and was up 10-2 after the first quarter. The lead kept growing. Enterprise led 38-13 at halftime, 59-18 after three quarters and the Cats outscored the Jags 13-0 in the fourth.

“We played well defensively in the second half,” Enterprise coach George Scott said. “For the seniors, that was a good way to end their last game at Enterprise High School. They got a great deal of playing time last night and they performed well.”

The play of Page and Gosha was encouraging to Scott, who said the team needs other players to step up on offense besides McClain.

“Serrenity is really confident in her shot and her shot has been going in a lot lately,” the coach said. “When she gets in the game she’s been giving us a positive contribution. She did that last night.

“And Jaida was making shots, getting offensive rebounds, playing good defense and finishing on layups.”

Next up is the Class 7A, Area 7 Tournament on Wednesday night at Robert E. Lee High in Montgomery. Enterprise will play Jeff Davis. The teams split in the regular season.

“Really, ever since the last area game, the rest of the regular season has been about getting ready to play that game next week,” Scott said. “I told the girls you can’t play based on your opponent. You’ve got to play the way we play.”

Enterprise boys 64, Barbour County 54The Wildcats were in a fierce battle through three-plus quarters, but exploded for 27 points in the fourth and pulled away from the Jaguars.

The Wildcats led most of the game after taking an early 12-2 lead just over three minutes in. But Barbour County shook off that slow start. Enterprise led 16-15 after the first quarter, 28-26 at halftime and Barbour County took a 38-37 lead into the fourth.

But Josh McCray, who led Enterprise with 20 points, drilled a clutch 3-pointer and Enterprise forced several quick turnovers that led to easy baskets and allowed the Wildcats to open a 51-44 lead midway through the fourth.

“We were able to get some layups off some turnovers,” Enterprise coach Rhett Harrelson said. “The first three quarters we were able to turn them over a little bit, we just couldn’t score off of it. We couldn’t finish at rim, we didn’t hit a shot.

“In the fourth quarter we had that three- or four-play stretch in a row where we got some easy layups. That’s the only separation in this game.”

It was an ironic Senior Night for Enterprise. Three of its four seniors on the roster were injured and did not play. K.J. Couch and Matthew Newell suffered knee injuries before and in the first days of the season. But Dallas Howell sat out Thursday’s game with a strained hip flexor. He also did not play in Friday’s regular-season home finale against Greenville.

“It’s day to day. He’s going to get treatment every day,” Harrelson said. “He’s not going to do anything until Tuesday.”

Tuesday is Enterprise’s key 7A, Area 3 Tournament opener against Jeff Davis at Robert E. Lee. A victory moves the Wildcats into the sub-regional round. A loss would end their season.

But one did — and played very well. Dominic York had 13 points and helped the Wildcats on both ends of the floor.

“He hit a couple big 3s, plus I think he’s our best post defender as far as walling up and making the guy shoot over him,” the coach said.

Quentin Hayes finished the game with 14 points for Enterprise.

Ralpheal Williams led Barbour County with 21 points — 19 in the second half. Javier Walker scored 16 points — 10 in the first quarter.

“That was a hard-fought, tough win. It’s good to win one of those ugly games like that,” Harrelson said. “But we’re going to have to play better moving forward.”

Enterprise JV boys 52, Barbour County 4The Wildcats stormed out to an 18-0 lead after the first quarter and led 31-2 at halftime and 44-2 after three quarters.

The Wildcats closed out the final week of the regular season with a home loss to the Tigers.

“We turned the ball over too much,” Harrelson said. “I think fatigue had some to do with it. I left the message with our team to put this one behind it. I mean, from this point on it’s tournament time.”

In other Coffee County games:

The Rebels led 45-31 after three quarters and the Bulldogs cut it to four in the final period, but Zion Chapel held on for the win.

Cale Sumblin led Kinston with 31 points, including 12 in the fourth quarter.

Breanna Sanders had 17 points and Freeda Hooks 10 to lead Elba, which had 10 players score in the win.

Zion Chapel was led by Janna Miles with 13.