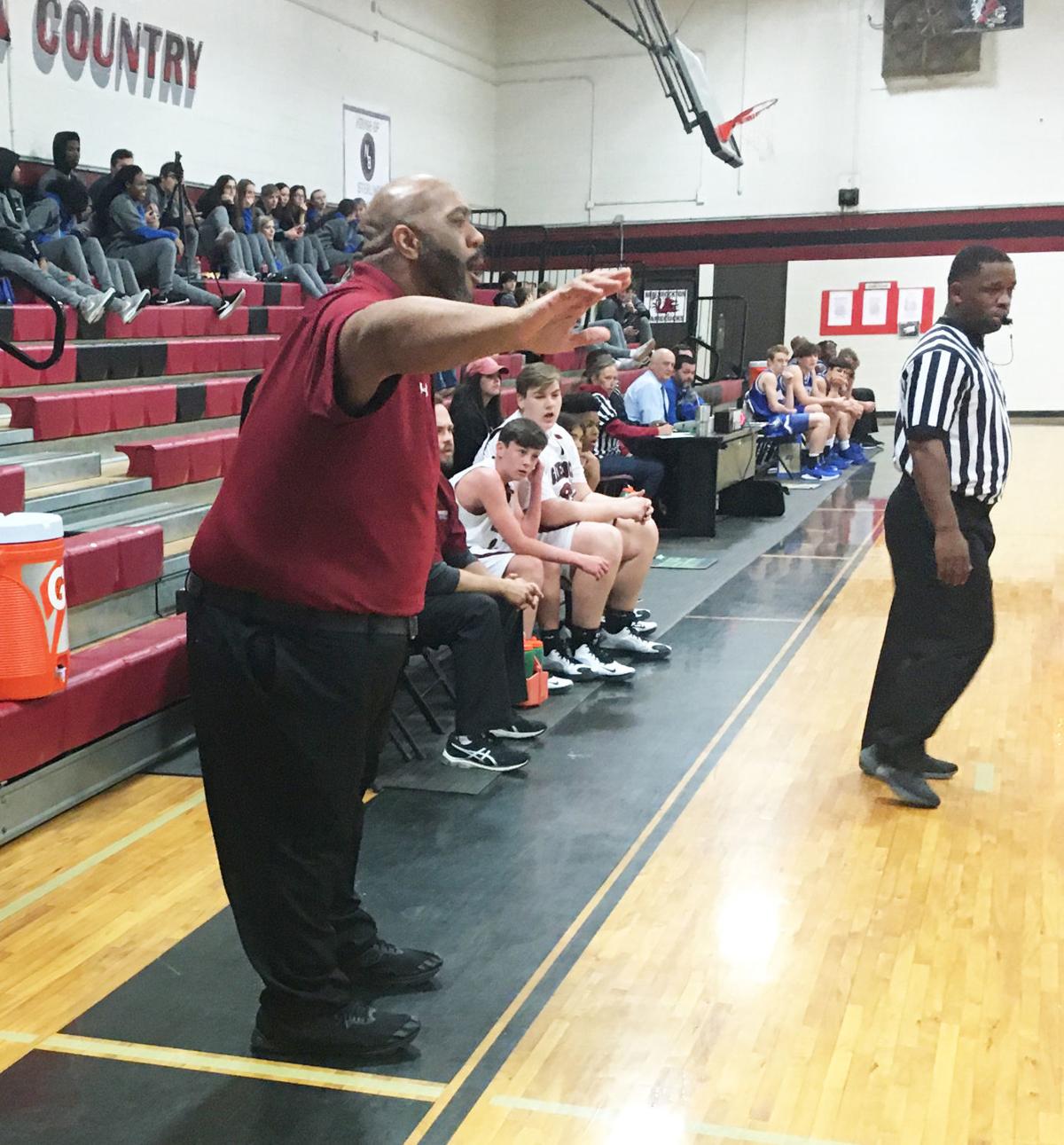 New Brockton coach Jonathan Hawkins directs traffic on the floor during a recent junior varsity game against Rehobeth. Hawkins said his varsity team has shown progress in its pre-Christmas schedule and hopes it continues in January. 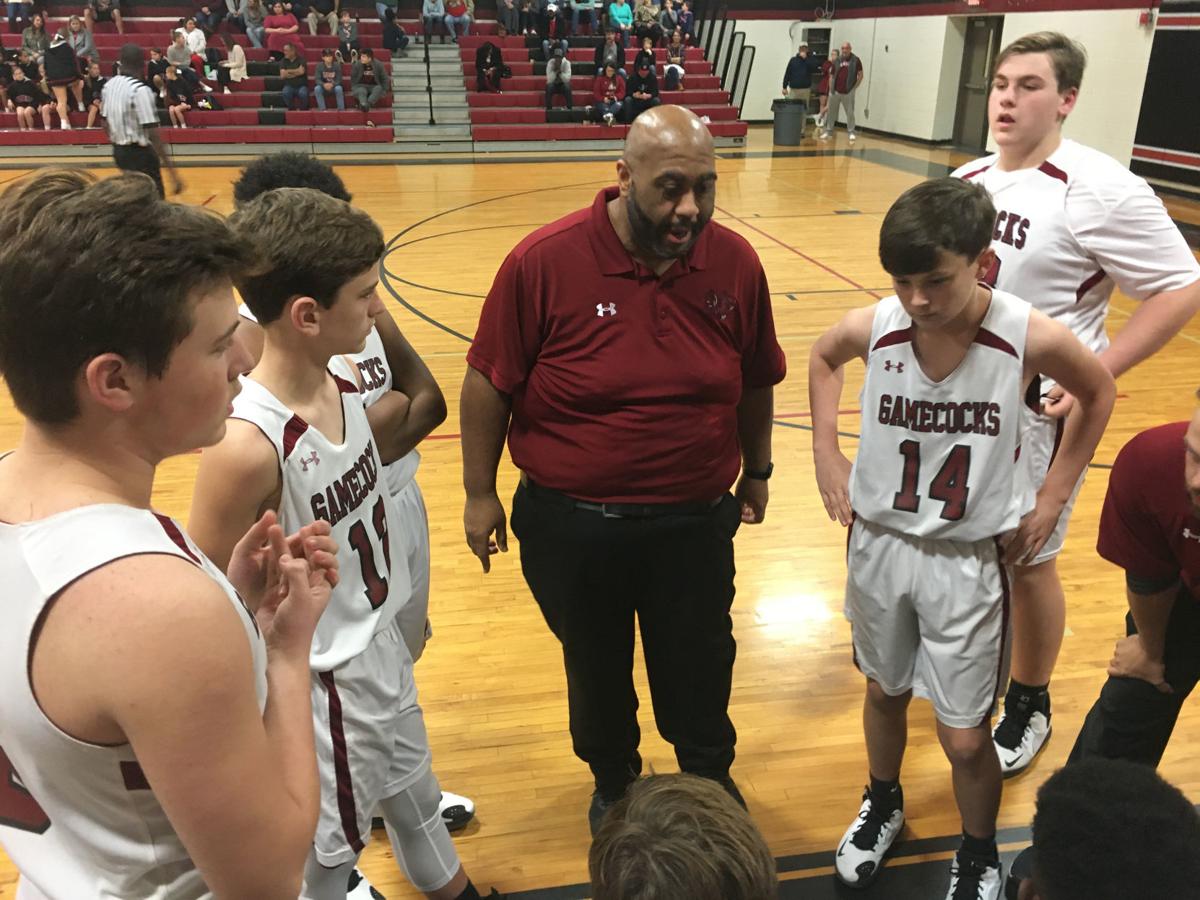 New Brockton boys coach Jonathan Hawkins huddles up with the Gamecocks' junior varsity during a recent game against Rehobeth.

New Brockton coach Jonathan Hawkins directs traffic on the floor during a recent junior varsity game against Rehobeth. Hawkins said his varsity team has shown progress in its pre-Christmas schedule and hopes it continues in January.

New Brockton boys coach Jonathan Hawkins huddles up with the Gamecocks' junior varsity during a recent game against Rehobeth.

New Brockton boys basketball coach Jonathan Hawkins cautioned that he doesn’t want to say things have gone well, but he sees beyond the Gamecocks’ 2-9 record and sees progress from his team.

“I think we’ve shown a lot of growth,” Hawkins said. “Just from where we are as a program — we haven’t been competitive with some teams — but overall, the program has grown. The kids have grown and they’re working hard.

“We’re in the beginning stages, building it back from the ground up. I’m pleased with the progress we made and I think we have a good outlook for January.”

The season resumes Jan. 9 at Pleasant Home. Class 2A, Area 4 begins the next night at Zion Chapel.

The Gamecocks are led by two seniors, Tariq Walker and Dalton Shehee.

“Tariq is our primary ball handler,” Hawkins said. “He’s the guy that our kids look to. He’s probably our most skilled and most talented basketball player.

“Dalton played junior varsity last year as a junior, but he’s provided a good scoring punch for us. He scored 12 of our points in our first win against Samson in the fourth quarter. He was really the driving force behind that. As a shooter, especially if he gets going, he can make some shots.”

“We have some good, athletic post players — Clay Reynolds and Julian Noble,” the coach said. “Clay is a level headed kid, a smart kid who knows his way around a basketball court.”

There are only nine players on the varsity roster. One of the biggest surprises has been the addition of sophomore C.J. Wilkerson.

“He actually started off on the B-team,” Hawkins said. “He’s grown more from a maturity standpoint being with the varsity the last three or four weeks. I’m really proud of the way he’s responded to that. He did a good job in a couple games.

“A couple teams tried to take away Tariq as a ball handler. C.J. did a good job bringing the ball up the court for us. He’s also probably our best on-ball defender. He had some issues early with foul trouble when we first brought him up the varsity. He’s done a much better job with that. He’s the only sophomore I have playing on the varsity. I’m proud of his growth so far.”

The coach said his seniors, Walker and Shehee, have done a good job as leaders.

“Those couple seniors, they work well together and they and Dillon are basketball-only guys,” he said. “It’s hard to get that at a small school.”

“We’ve done some things scheme-wise that they’ve picked up on,” he said. “I think our defense has gotten a lot better, especially our zone defense. We’ve gotten better at executing the little things.”

He gave an example about the growth he has seen from his team.

“We played Rehobeth in the summer in a play date at Enterprise, and we couldn’t even get the ball across half court against their pressure,” he recalled. “We played them the other night and they ended up running away from us, but we were able to execute some things. It wasn’t because we couldn’t break the press.

“Their style of play was just so fast, there’s no way for us to simulate that. We were able to execute and break their press and get some layup opportunities. That’s just an example of things like that, being able to play the game, play together, communicate and execute offensively and defensively.”

New Brockton has already played local rival Samson twice — an area victory and a loss in the Daleville Tournament.

“I haven’t seen Goshen at all,” the coach said. “I’ve seen Zion Chapel. Samson and Zion Chapel have players that present individual matchup problems. Hayden McCoy scored 36 against us in the Daleville Tournament. Zion Chapel has the big 6-8 post player, which will present problems for anybody.”

Hawkins said the Gamecocks have a chance to be competitive in the area.

“We can win in our gym and go to their gyms and be competitive. Goshen won it last year. We’d like to stay away from the fourth seed. That way, if you win one game in the (area) tournament, you play on. That would be a big step for our program.”