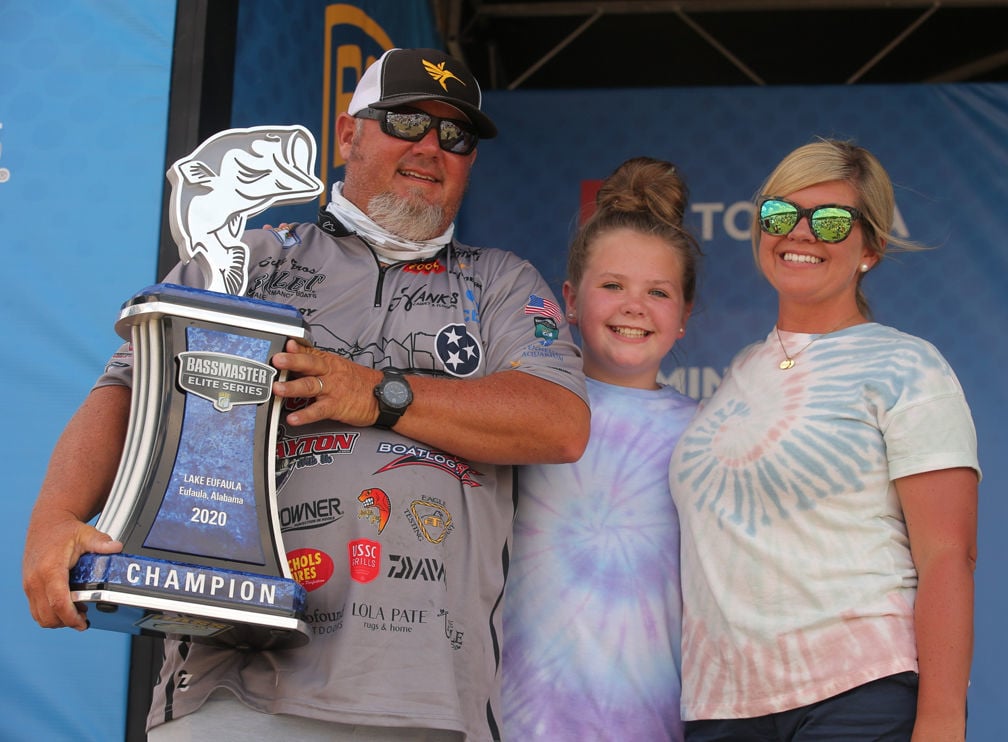 Buddy Gross of Chickamauga, Georgia rallied from 10th place on the final day with five bass weighing 27 pounds and 11 ounces to win the Bassmaster Elite Tournament on Lake Eufaula. The Bassmaster Elite Series rookie is pictured here at the grandstand with family members at Lakepoint State Park Marina. 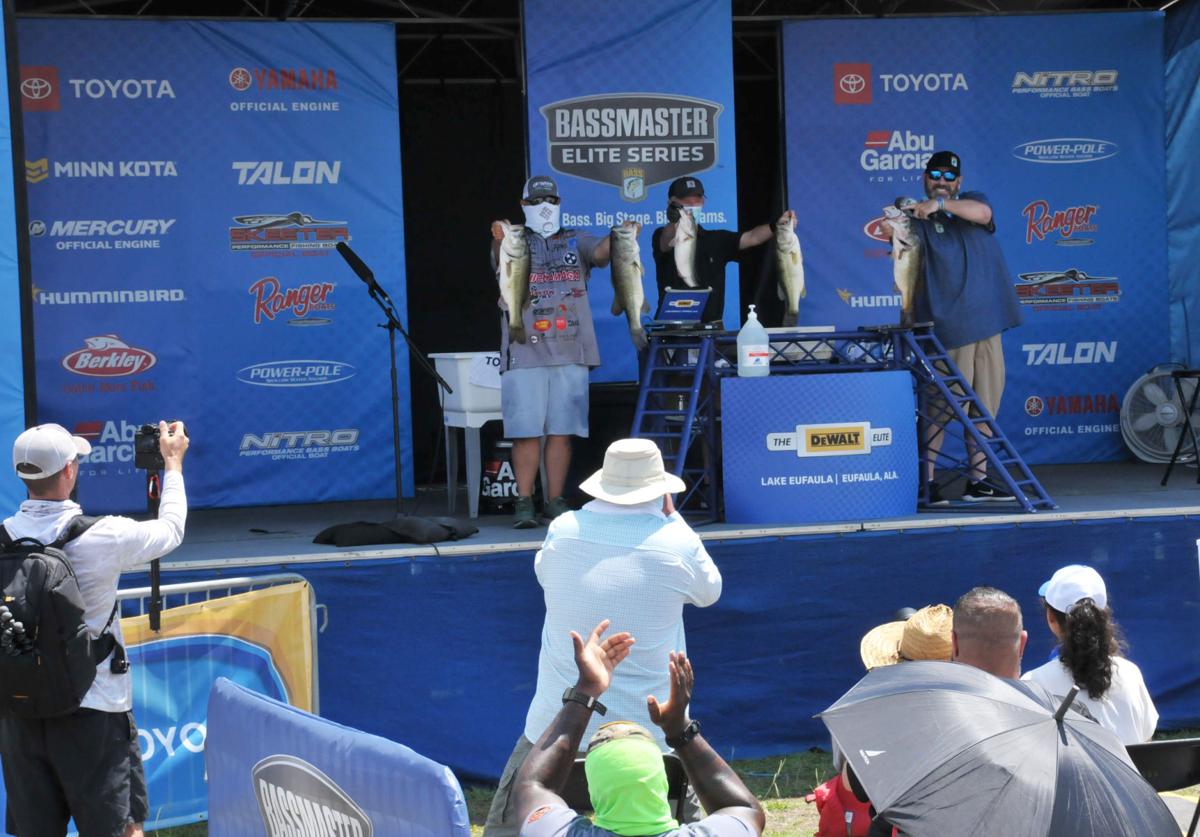 Main stage announcers have to help Buddy Gross hold up his Saturday stringer that proved to be the difference in winning the Bassmaster Elite tourney on Lake Eufaula.

Buddy Gross of Chickamauga, Georgia rallied from 10th place on the final day with five bass weighing 27 pounds and 11 ounces to win the Bassmaster Elite Tournament on Lake Eufaula. The Bassmaster Elite Series rookie is pictured here at the grandstand with family members at Lakepoint State Park Marina.

Main stage announcers have to help Buddy Gross hold up his Saturday stringer that proved to be the difference in winning the Bassmaster Elite tourney on Lake Eufaula.

After a week of constant adjustments, everything came together perfectly for Buddy Gross on Championship Saturday.

The Bassmaster Elite Series rookie, fishing only his second event on the trail, caught a tournament-best five-bass limit that weighed 27 pounds, 11 ounces and sprang from 10th place to a victory in the DEWALT Bassmaster Elite at Lake Eufaula with a four-day total of 84-8. He earned $100,000 and one of the coveted blue trophies that comes with every Elite Series win.

Instead of the usual routine of being handed the trophy by Elite Series Tournament Director Trip Weldon, Gross received the prize onstage from his family due to strict social distancing measures in the midst of the COVID-19 pandemic.

“It doesn’t get much better than that,” Gross said. “This is something you dream of as a kid because B.A.S.S. is the epitome of fishing — just the staple of the fishing world. To dream about something like this, and then for it to happen so early in my career, is amazing.”

Gross, who lives in Chickamauga, Georgia, made two scouting trips to Lake Eufaula before the event. Each trip, the weather was so rough that he spent all of his time just idling around and marking brushpiles.

During those two trips, he said he marked over 300 of the man-made structures that are so prominent on the fishery.

But when he showed up for the official practice period on Sunday, some of the brush he had marked was gone — presumably washed away by flooding in the area. However, Gross said new brushpiles had already been put in place since his most recent visit.

“I didn’t want to spend time fishing phantom waypoints,” Gross said. “So, I had to start marking those places off the list where brushpiles had washed away. Then as I was doing that, I found brushpiles in places where there weren’t any back before the off-limits period just 35 or 40 days ago.

“The people in this town must be part beaver or something. I’ve never been to a place with so many brushpiles.”

Gross started his week probing the brush with a Zoom Swimmer in the Tennessee shad color and a 5-inch Natural Light Scottsboro Swimmer. That netted him just 16-14 on Day 1 and left him in 43rd place.

The next day, he made possibly his most important adjustment of the week.

“On the second day of the tournament, I switched over to a jig,” he said. “First cast, I got bit. Second cast, I got bit. It was just consecutive. Every brushpile I went to it probably increased my bites by 50 or 60 percent.”

The magic lure was a prototype bullethead jig from Nichols Lures with a green pumpkin Zoom Super Chunk trailer. It allowed him to catch 20-7 on Day 2, 19-8 on Day 3 and then the monster bag of 27-11 during Saturday’s final round.

On Saturday, another slight logistical adjustment was necessary for him to find the quality of fish he needed to jump from 10th place and surpass Alabama pro Scott Canterbury who entered the day with more than a 4-pound lead.

“I had started off fishing new brush this morning, just places I hadn’t fished,” Gross said. “On the deeper ones, I just didn’t get bit.”

Then he moved to an area with shallower brush in Pataula Creek.

“On the first shallow brushpile I fished, I hung one and lost it,” he said. “Then on the second one, I caught a 6-13 that was my biggest fish of the day. I said right then, ‘This is gonna be the deal all day.’

The season has been one of ironic twists for Gross.

Considered one of the best anglers on Lake Chickamauga, he was deeply disappointed when Elite Series tournaments scheduled for that fishery were cancelled in February and then again in April. He thought that might be his best chance for a win this season, but Eufaula helped take the sting out of those two curves thrown to the professional fishing world — first by flooding on the Tennessee River and then by the COVID-19 outbreak.

This week, Gross wouldn’t have even qualified for Saturday’s final Top 10 if North Carolina pro Shane LeHew hadn’t been penalized several ounces for weighing in dead fish and then 2 pounds for accidentally making a cast with six bass in his livewell.

Crazy things also happened to Gross on the water.

“The first day of the tournament, I was running brushpiles so fast that I was fishing with my lifejacket on,” he said. “I had a 7-pounder at the boat, and I reeled my lanyard up into my reel. That fish was out there jumping, so I tried to just muscle through it. All that did was make it worse.

“That fish eventually got off — and I thought [for] sure that would cost me a lot. But I guess when something is meant to be, it’s meant to be.”

Canterbury caught 19-3 and finished less than a pound back with 83-9. Georgia pro Drew Benton weighed in 24-8 — the second-biggest bag of the event — and placed third with 82-4.