Holmes County Sheriff’s Office authorities say this evidence was gathered by the  agency in its case against Mark Kristopher Pegg. 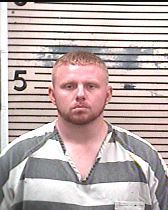 A Silver Creek, Georgia, man was charged Wednesday with trafficking methamphetamine, according to a press release from the Holmes County Sheriff’s Office.

Investigators report that they saw 32-year-old Mark Kristopher Pegg standing near a parked vehicle on a path just off Creek Road, an area identified as a problem site for illegal dumping. As they approached Pegg, authorities said, he moved quickly to the front of the truck and was seen concealing something in the vehicle’s front grill.

Investigators examined the grill, where they located a baggie containing more than 14 grams of methamphetamine. A small bag of marijuana was also recovered from underneath the truck, and a large amount of U.S. currency was located inside the vehicle.

Pegg was arrested and is charged with trafficking methamphetamine and possession of marijuana less than 20 grams.