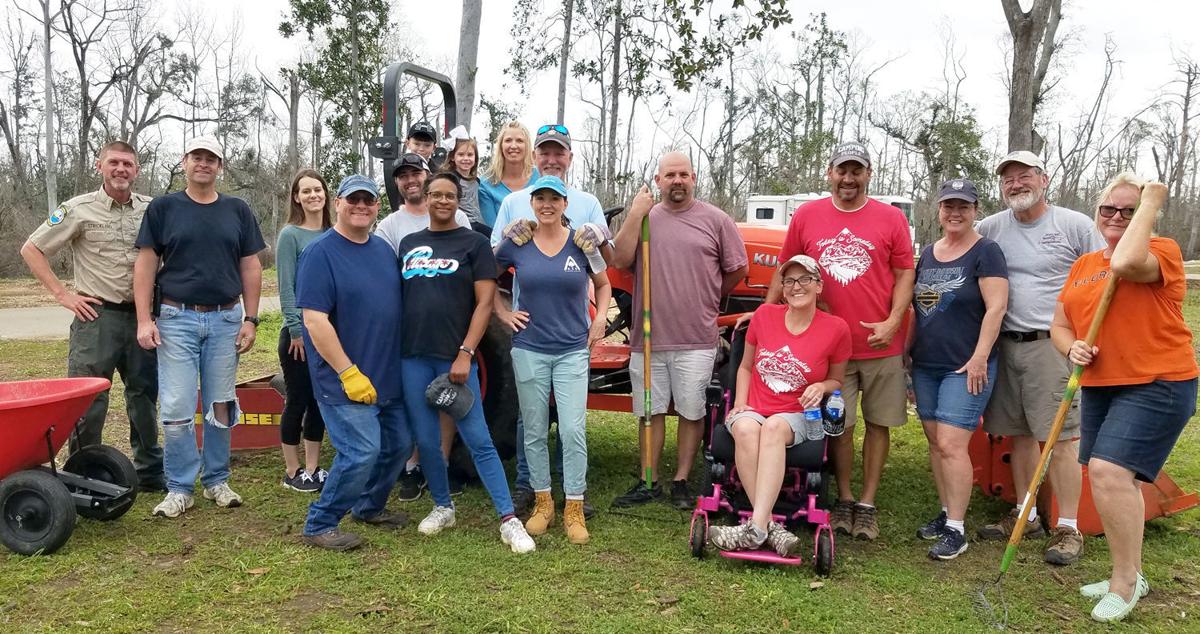 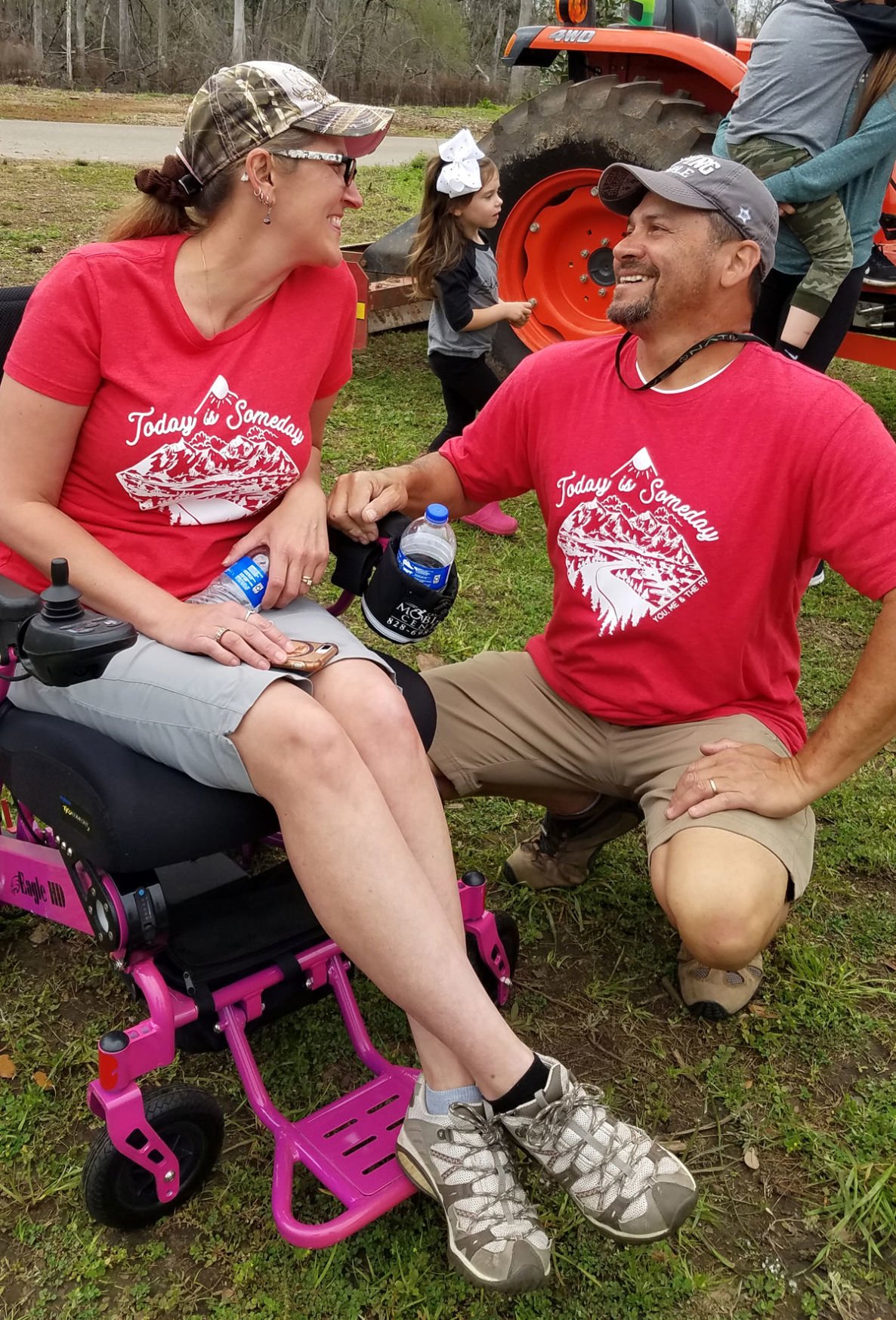 Shelley Van Beers, left, and husband Tony Van Beers wear t-shirts that support a message they try to convey in the way they live their lives. 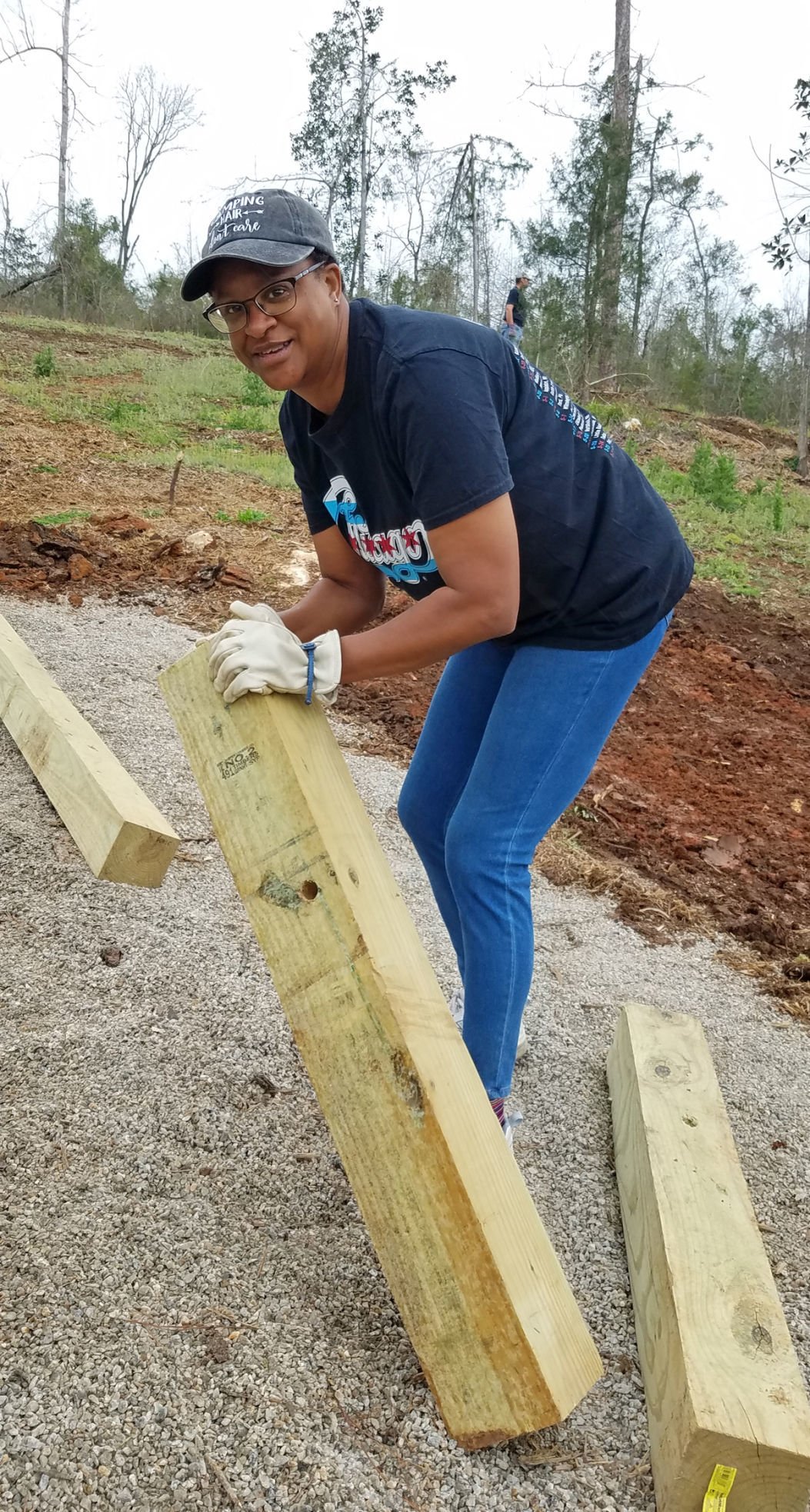 Tasha McDonough lifts a beam for use in rebuilding a structure in the equestrian-area campground. 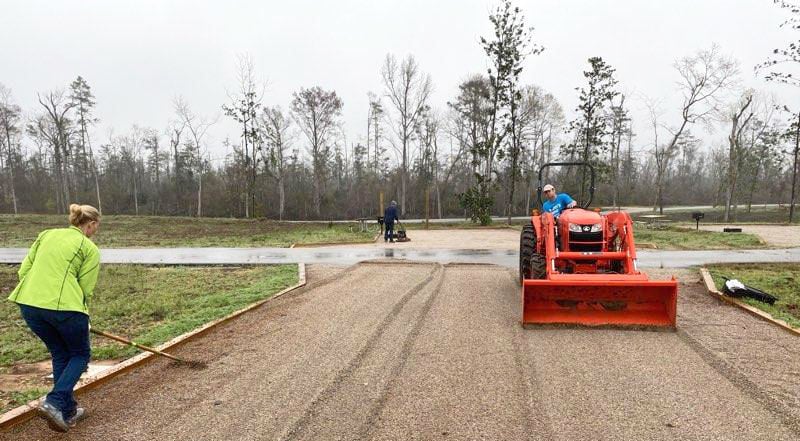 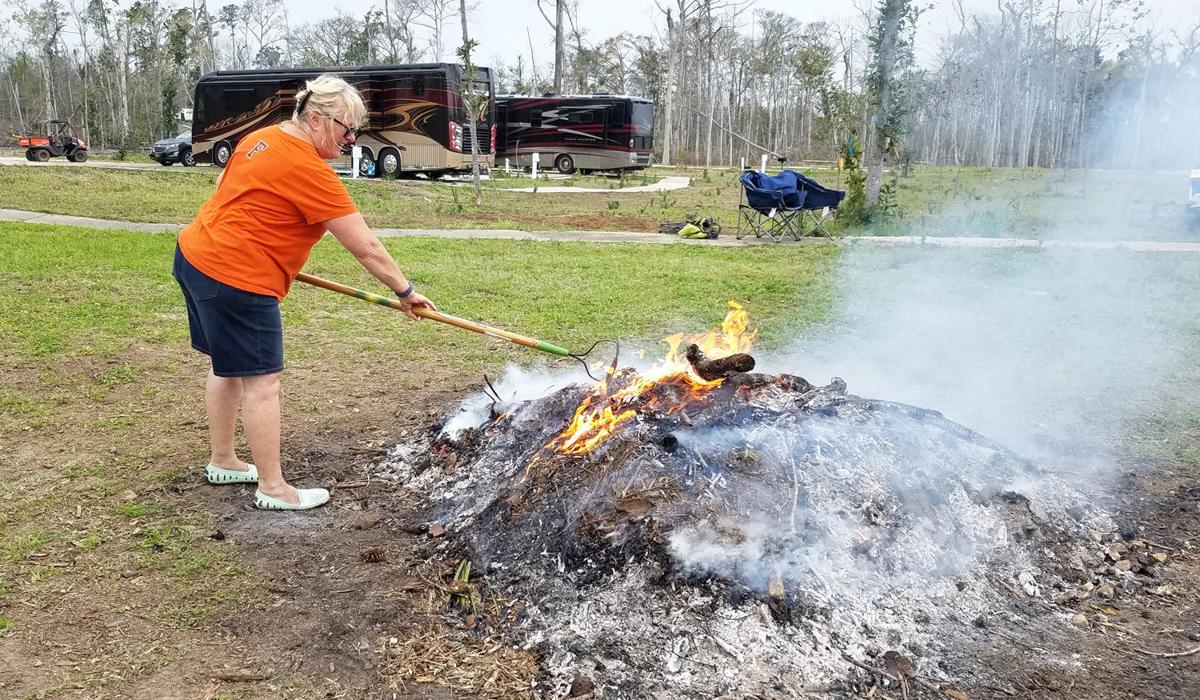 Lynda Fritcher tends a debris fire as she and other volunteers work at Florida Caverns State Park, Monday, Feb. 24, 2020, in Marianna. 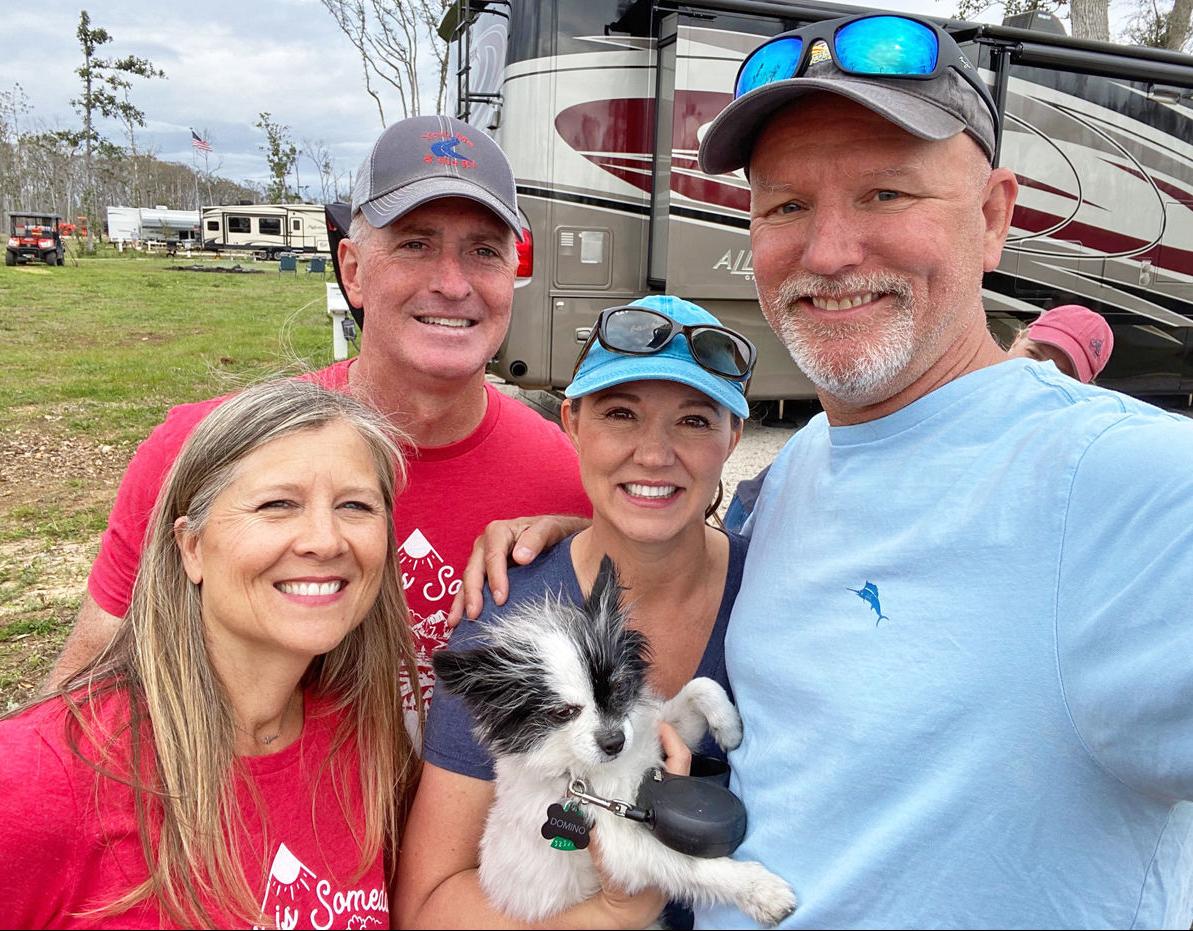 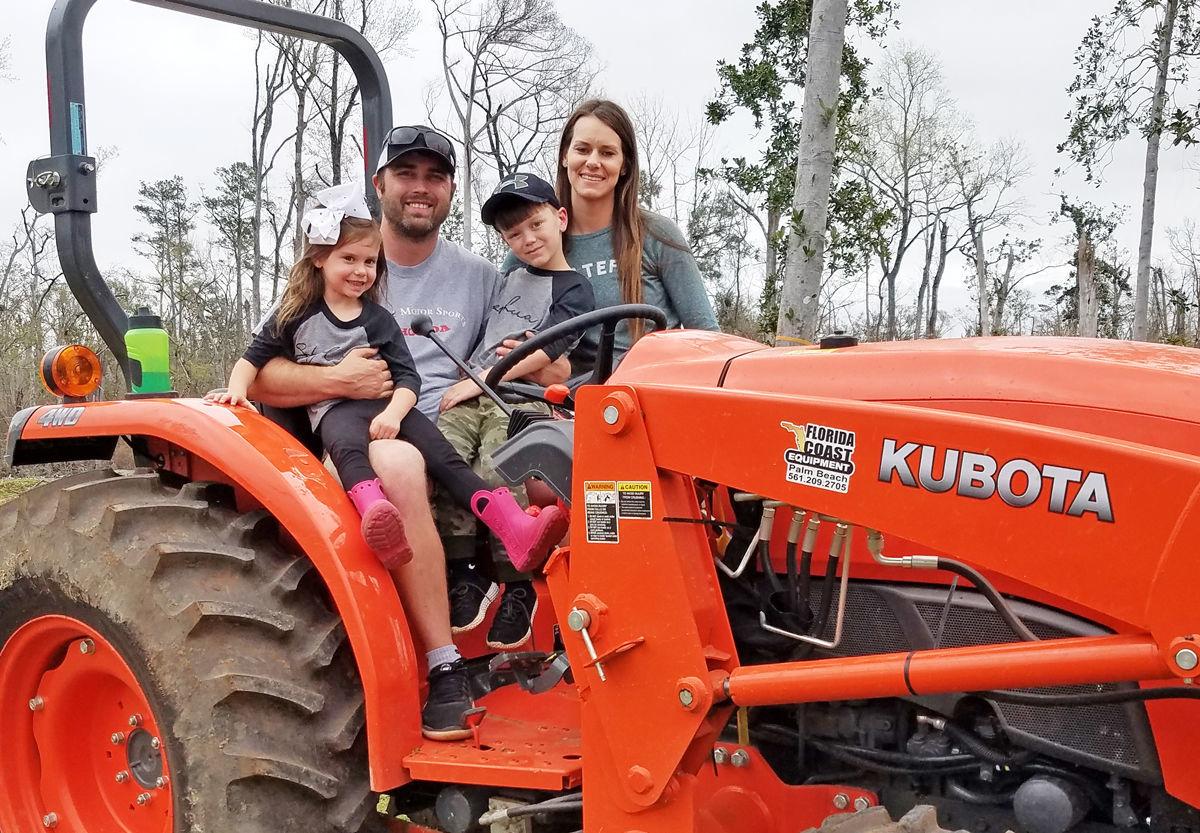 Amanda and Josh Lauzon involve their kids, Joshua and Skylar Lauzon, in their volunteer work at Florida Caverns State Park. The little ones pick up sticks and such, gaining experience in helping others and more. 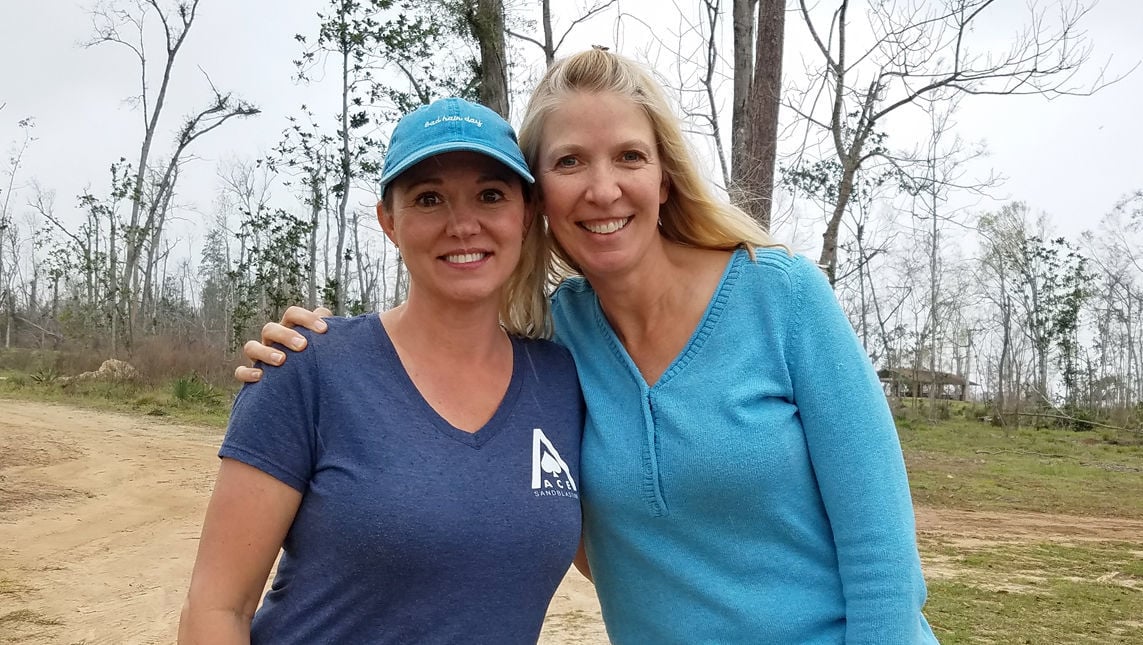 Shelley Van Beers, left, and husband Tony Van Beers wear t-shirts that support a message they try to convey in the way they live their lives.

Tasha McDonough lifts a beam for use in rebuilding a structure in the equestrian-area campground.

Lynda Fritcher tends a debris fire as she and other volunteers work at Florida Caverns State Park, Monday, Feb. 24, 2020, in Marianna.

Amanda and Josh Lauzon involve their kids, Joshua and Skylar Lauzon, in their volunteer work at Florida Caverns State Park. The little ones pick up sticks and such, gaining experience in helping others and more.

A desire to help Florida Caverns State Park recover from Hurricane Michael has brought together three groups of mostly full-time “RVers” who live their lives on the road exploring America.

Phil and Shar Roos are two of the main organizers of this excursion, part of their “Year to Volunteer” campaign, in which they’ve invited others to find opportunities to help at least one park in all 50 states over the course of 2020. The local project is their first in the series.

They’d learned about the devastation the storm brought to the Caverns and that the park, more than a year past the hurricane, was still very much in need of restoration. They put it first on their list.

One of the first things their team did when they arrived in Marianna on Feb. 17 was to start rebuilding all the park’s RV sites, including their gravel parking areas. That work is finished now or nearing completion. They’re working on the Boy Scouts camping area, rebuilding the showers there, and the location for equestrian-focused campers. About 20 are on this project right now.

They’ve also re-established fire pits and other amenities, using their life skills to help many areas of the park recover in several ways.

Shelley and Tony Van Beers of north Georgia are part of the team. Shelley has a special physical challenge that she must push through sometimes. Diagnosed with muscular dystrophy in 1998, at age 23, she has good days and bad. Sometimes she has to have the help of her motorized chair to get around. But she doesn’t dwell on the bad days and does not let those get in the way of enjoying her life to the fullest. And helping brings her joy.

“I feel blessed that I’m even able to do it,” she said of the work days she’s putting in here. “I feel that, for as long as I can, I should give back and volunteer.”

She and her husband were wearing bright red t-shirts at the worksite Monday, emblazoned with a phrase that resonates with special significance for the couple. “Today is Someday,” it reads.

They got those from their friends Stacy and Phil Farley, founders of the “You, Me and the RV” organization and travel blog. The two couples met in 2018. The Farleys had just started RV-ing full time; since then, their travel blog has put them in the spotlight among fellow full-timers.

“Tomorrow’s not guaranteed,” Shelley said. “Everybody says ‘I’ll do it someday’…but we very much relate to the idea that today is someday. We want to spread their message.”

She’s been bed-bound more than once because of health troubles, and although sometimes she’s dependent on that chair, she’s not confined to it. She said she and her husband are “taking advantage of what we do have… doing this while we can.”

Tony said his wife has defied doctor’s predictions through her determination and love of an active lifestyle.

“They told her she wouldn’t be able to walk,” Tony said. “She told them differently. We want to get the message out that, just because you’re disabled, that doesn’t mean you can’t go out and enjoy and do things that others do.”

They’re not completely full-time on the road and keep a home base with Shelley’s doctors nearby, but sometimes they’re gone for six months at a time or longer. It’s been half a year, so far, this time around. This latest stop, they say, has been meaningful in more than one way. They expect to come back to Marianna strictly on a pleasure trip in the future.

“We’ll be back, definitely. We’re doing this for the community and it has been great. We seek out small towns — we live in a small town ourselves — because you can find an amazing amount of love in them. We’ve found that here and we’ll be back to soak up some more of it.

“The people have reached out and made us feel so welcome, so appreciated. They’ve fed us, they’ve offered us some of the equipment and supplies we’ve needed, and generally made us feel loved.”

“They’re pretty much putting the pieces of the campground back together,” he said. “They’re here while we also have plumbers, electricians, water and carpentry contractors here, so a lot of work is being accomplished and I’m so grateful for their help.”

Just six days in, he said, starting from Feb. 17, the RVers had logged about 1,000 volunteer hours and had added 400 more as of Monday.

Shar Roos said the volunteers are getting as much out of it as they are putting in: They’re forging new friendships and building a social network that will keep them connected as they push on down the road to new adventures.

For young parents Josh and Amanda Lauzon, the project is giving them a chance to teach their children about volunteerism and the satisfaction that comes with achieving goals. The little ones pick up sticks and otherwise help where they can.

To find out more about Year to Volunteer, Phil and Shar Roos can be reached at: philandshar@odysseetheworld.com.

How ‘A Year to Volunteer’ began

Editor’s note: Shar Roos provided this synopsis of how their A Year to Volunteer started and…