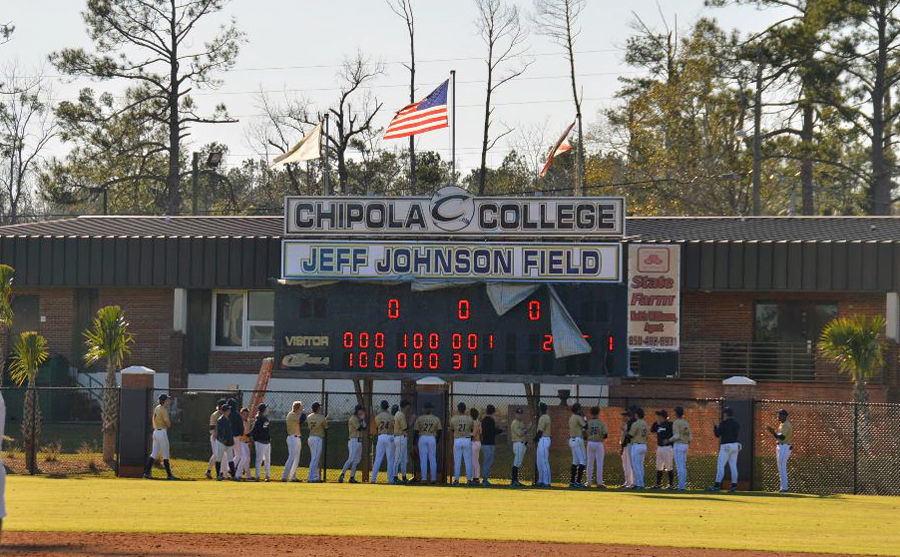 Players and colleagues join Coach Jeff Johnson for a commemorative photo, Saturday, Jan. 25, 2020, when the Chipola College baseball field was named in his honor.

Players and colleagues join Coach Jeff Johnson for a commemorative photo, Saturday, Jan. 25, 2020, when the Chipola College baseball field was named in his honor.

Chipola President Dr. Sarah Clemmons said, “You’ve heard of keeping up with the Joneses; well, at Chipola, it’s all about keeping up with the Johnsons. For 30 years, Coach Milton Johnson put Chipola on the map in basketball; and for the last two decades, Coach Jeff Johnson has made Chipola the premier community college baseball program in the country.”

Dr. Clemmons thanked Coach Johnson for his “dedication to his players and for his commitment to excellence.”

Coach Johnson is beginning his 23rd season at Chipola, but his record as a winner in athletics began in high school, where he was an All-State baseball, football, and basketball player at Liberty County high. As a defensive back, he set state and national high school records for career interceptions with 43.

Coach Johnson credits his father, the late Jerry Johnson, for teaching him much of what he knows about sports and coaching. “Daddy taught me so much about how to treat players and people in order to be successful. He was my greatest mentor and a great example as a leader and a coach.”

Jeff Johnson played baseball at Gulf Coast Community College in 1985. He transferred to the University of Central Florida where he broke the school’s all-time career saves record.

Johnson began his coaching career at Marianna High School, where he had a 127-48 record in seven seasons and took the Bulldogs to their first-ever state championship final four.

In 1996, he became head coach at his hometown Liberty County High, where he had a 25-7 record with a runner-up finish at state.

Johnson began coaching at Chipola in 1997, and has served as athletic director and baseball coach since 2015. Coach Johnson has built Chipola into one of the top JUCO programs in the country, compiling an overall record of 866-396-2. The Indians are the reigning three-time state champions. They won back-to-back national titles in 2017 and 2018, and also in 2007.

Johnson has 13 Panhandle conference titles and six runner-up finishes. His teams have played in the state championship nine of the last 12 years, winning the last three.

Coach Johnson also has a tremendous record for developing young men to move on to higher levels. More than 225 of his players have advanced to universities or to the professional ranks. Five of his players were on major league rosters in 2019, including Nationals pitcher Patrick Corbin, the winning pitcher in the World Series. Also in the MLB last year, were: Russell Martin, Toronto Blue Jays; Andrew Toles, Los Angeles Dodgers; and Tyler Flowers and Adam Duvall, Atlanta Braves.

In 2017, Chipola had 11 players drafted, which was tied for the most of any college in the country. You may have heard of the other colleges—Stanford, the University of Michigan and the University of Texas at Austin.

The Indians are the reigning three-time FCSAA Florida State Champions and are ranked first in the NJCAA National Pre-season poll.