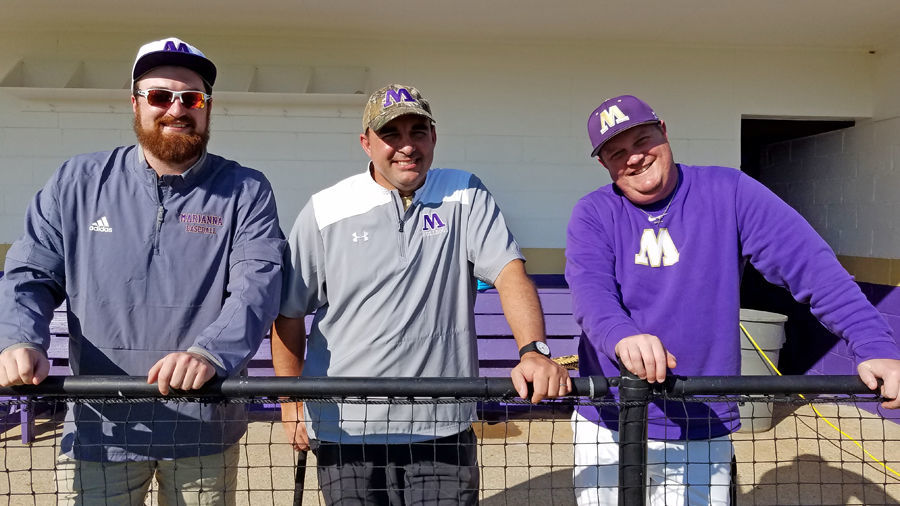 As his players stretched, threw, exercised and otherwise warmed up for a pre-season scrimmage and practice Monday afternoon, Marianna High School varsity baseball head coach Bobby Hughes Jr. said he thinks his squad has what it takes to have a winning year that exceeds last year’s 15-14 record.

In his fifth year at MHS, Hughes said he’s got a strong senior base that can lead the team to many victories, despite a tough schedule and the first year dealing with a new way of doing things at the state level.

The Florida High School Athletic Association had changed the pathway leading to a chance to win a state championship.

“You can play who you want throughout the season now, and now they go by MaxPreps rankings as to whether you go to state playoffs (rather than considering how your team fares against district opponents),” he explained.

MHS will also be in new district, this year, where the Bulldogs have been linked with Florida High, McClay and Gadsden County high schools.

And Hughes has chosen not to put those teams on his regular-season schedule, since within-district results have no direct effect on playoff chances and the rules have changed in a way that allows him to cloak his hand before they meet up at district.

Hughes said he’s no fan of the way the playoff teams will be decided, because great district play doesn’t necessarily mean the team will make the playoffs.

“I don’t like it, because it gives no reward (a state playoff spot) to the teams that make it to the district championship game,” Hughes explained. “I could play them but I don’t want to show them anything (before district title competition).”

Despite his frustration over state playoff procedures, Hughes expects his team to have a good year.

“I think we can win at least 20 games,” he said, a performance that could put the team in line for more consideration at state playoff time.

Hughes says he expects Wilton Pittman to be a real factor this year.

“He is probably one of our strongest players, at first base and overall, hitting and defending. Last year he got hurt and had surgery — he only played two games last year because of a torn muscle in his shoulder — but he’s back this year.”

Hughes also is looking for a strong year from third-baseman/pitcher Ben Wiggins — he was the team’s leading hitter last year.

On defense, he’s expecting Caleb Torbett to be a leader.

His team overall, he said, has the potential to make it to the state.

“We’ve got a lot of different talents at pitcher,” Hughes said. “I’d probably say Ben Wiggins and Brantley Willis are really a couple of the strongest, and we have a few good utility players that can have an impact by working hard.”

He has 16 varsity players and a JV squad of 14, led by their head coach Adam Bigale and lead assistant Dakota Marley.

See the schedule for both teams in an accompanying article.