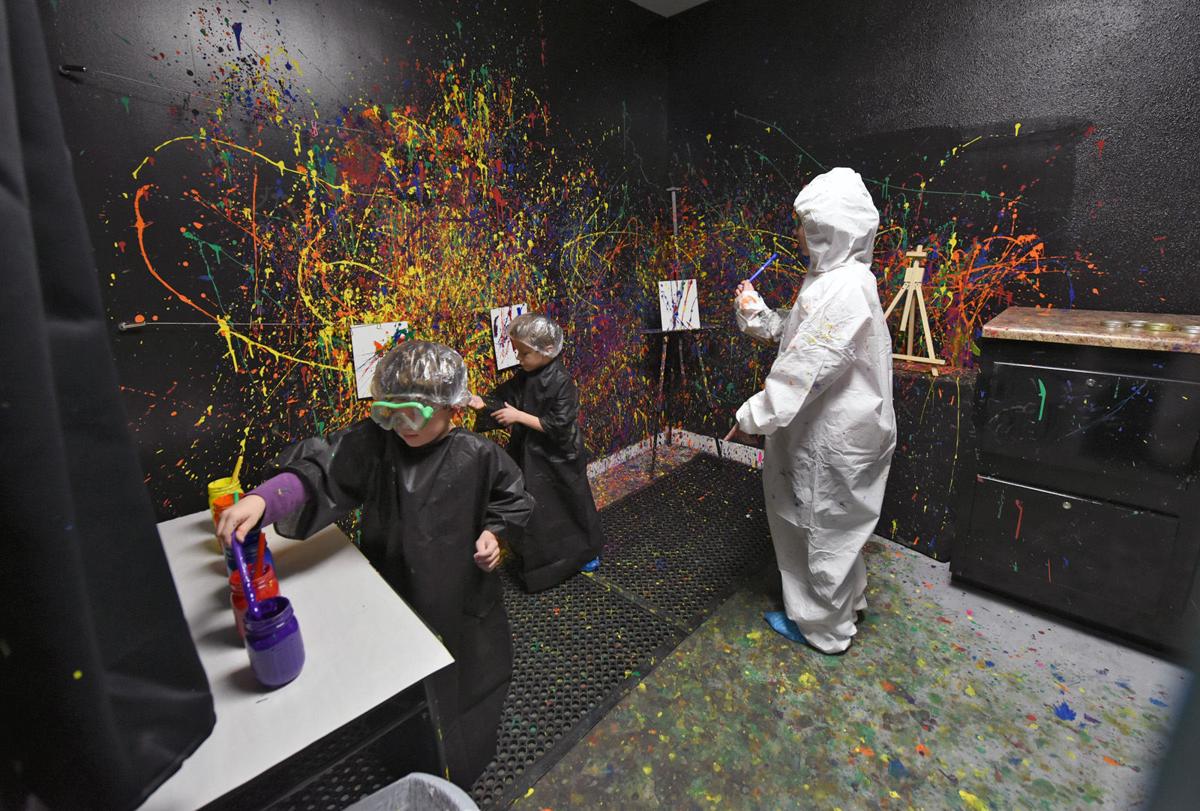 Children create works of art inside the Splatter Room during an open house held at Pinspiration in Headland. 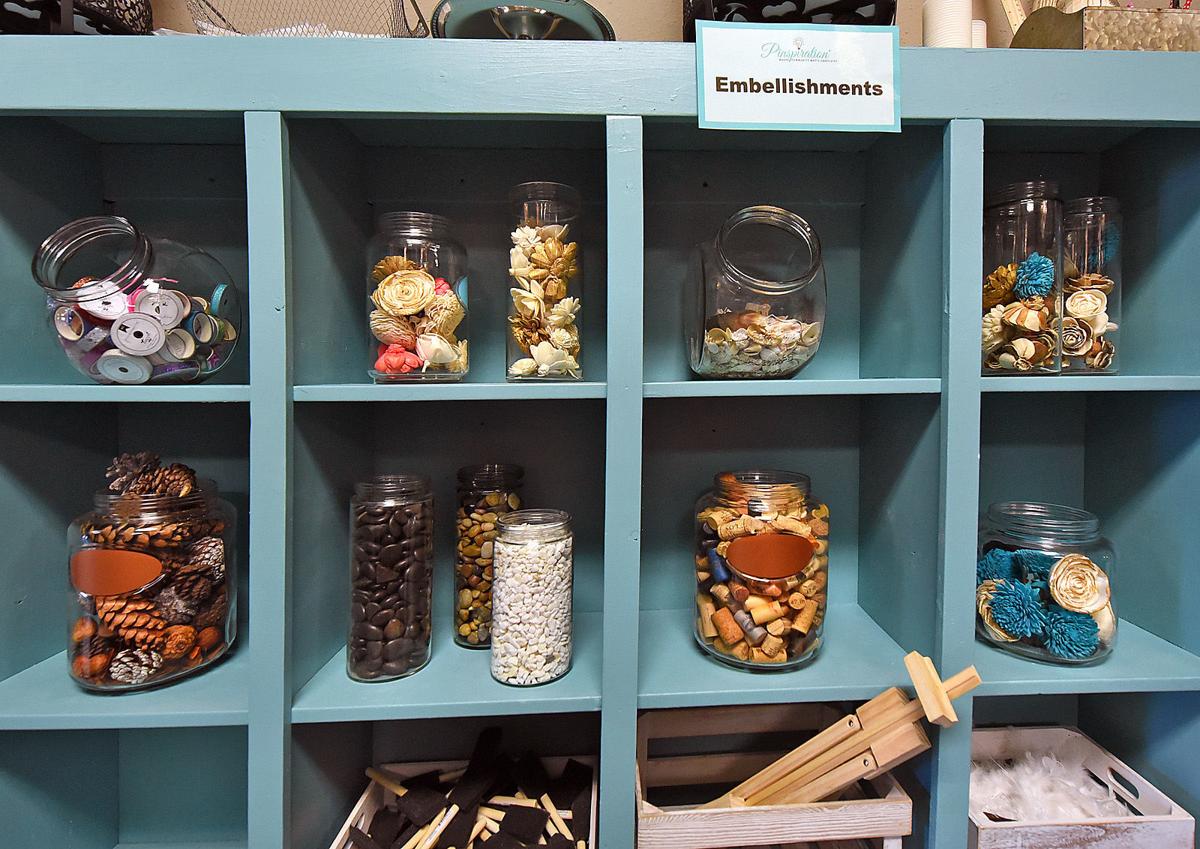 Pinspiration has a variety of embellishments that can be used for a client's chosen project. 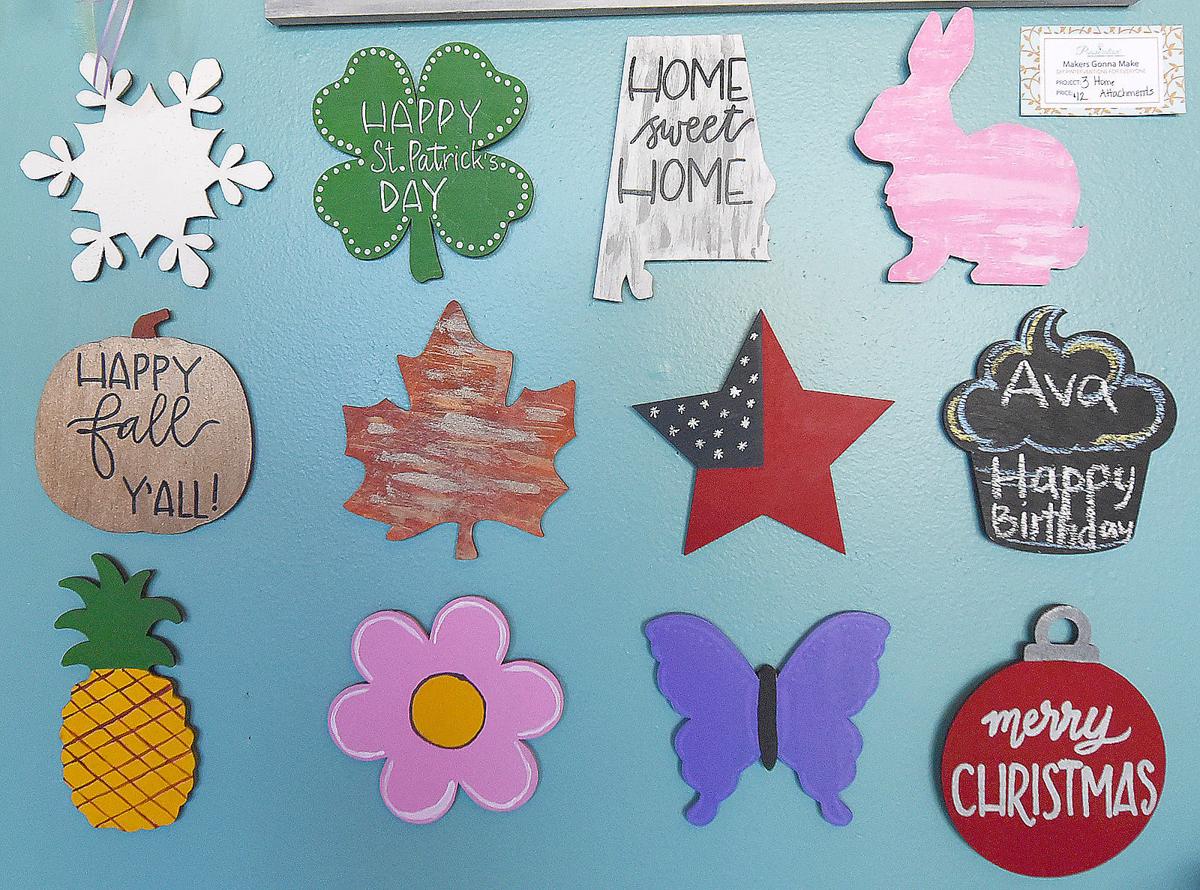 Pinspiration clients can make a variety of wooden attachments for a wooden home decor sign. 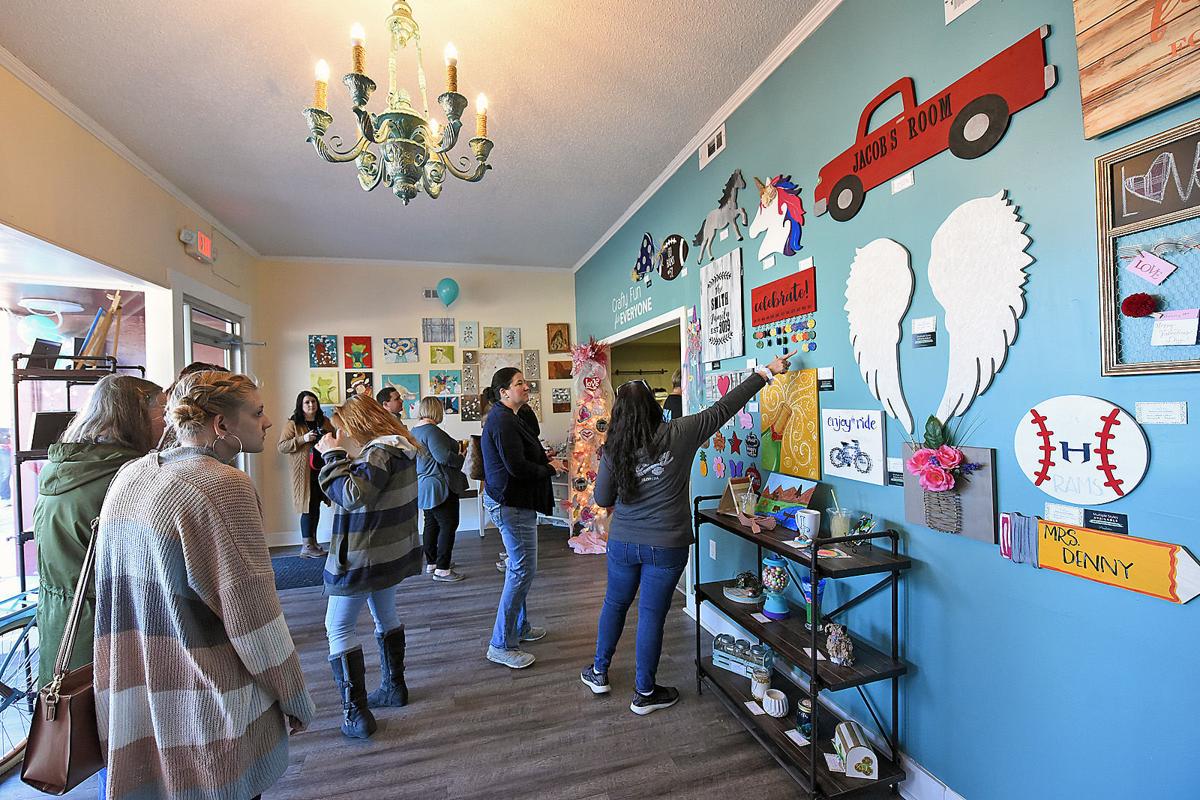 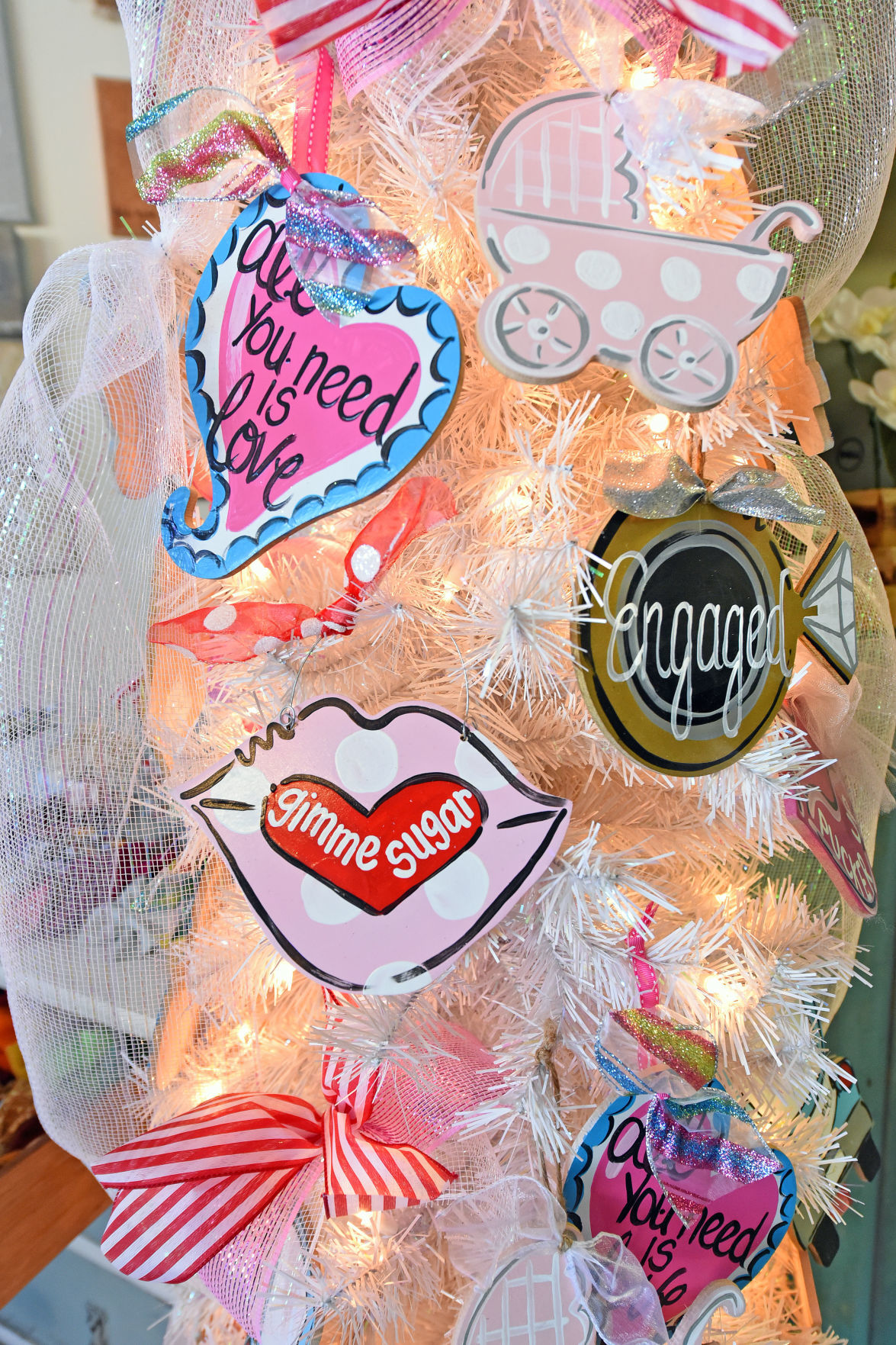 Clients can make their own wooden ornaments for various occasions.

Children create works of art inside the Splatter Room during an open house held at Pinspiration in Headland.

Pinspiration has a variety of embellishments that can be used for a client's chosen project.

Pinspiration clients can make a variety of wooden attachments for a wooden home decor sign.

Clients can make their own wooden ornaments for various occasions.

HEADLAND — Six-year-old Fiona Durbin was suited up and ready to sling paint.

A shower cap covered her hair, and goggles protected her eyes. Blue shoe covers were on her feet, and a black drape swallowed her whole — a clothespin secured the neck and kept paint off the school shirt she wore that day.

“She saw two other little boys do it,” said Victoria Durbin, Fiona’s mother. “She paints a lot, but she’s never flung paint or splattered paint.”

With her canvas hung on a wall covered in colorful paint splatters, Fiona went first for blue and purple. The first few flings of her arm produced only a few spots in one corner. After moving closer to the canvas, Fiona found her groove in the Splatter Room at Pinspiration in Headland.

The Durbin family drove over from Ozark for an open house at the business, located on Headland’s town square. Pinspiration is the latest craft workshop business to open in the Wiregrass.

Like the AR Workshop that opened in Dothan in 2018, the Pinspiration in Headland is a franchise and is only the second Pinspiration to open in Alabama. There are differences in the types of DIY projects you will find, but the basic concept of providing space and materials for craft projects is the same.

“We clean up your mess,” said Erica Killingsworth, owner of the Pinspiration in Headland. “We are here if you have questions. If you need a little bit of direction — that’s what we’re here for.”

Killingsworth and her husband, Larry, previously owned K-Time, a screen-printing business in downtown Headland. But the stress of that business was starting to worsen Erica’s multiple sclerosis, and Larry talked her into selling it. After she put the business up for sale, Erica came across a Facebook ad for Pinspiration and reached out to the corporate office in Florida.

Even though the intention was for Erica to not work and focus on her health, she said Larry was behind her starting the local Pinspiration after he saw how excited she was about it.

The Pinspiration in Headland has venue space for parties to rent. The business has a snack bar and plans to offer wine and craft beer for a charge. And while Pinspiration doesn’t really teach people how to do crafts, there will classes such as one on how to build a kaleidoscope Feb. 8.

Pinspiration projects include string art, acrylic pours, wood signs, soy candles and even the Jackson Pollock-inspired creations in the Splatter Room. Project prices average around $30 to $40, but start out as low as $12 and go on up to $72. There is a $5 booking fee, but that goes toward the final cost on the day of your visit. There are also specials and packages such as a date-night package, birthday parties or a parents-night-out package for kids. And if a group of friends comes in together, they don’t all have to do the same craft project.

Killingsworth said people can even come in with their own Pinterest-inspired project and craft for $12.

“A lot of people look at the paintings, like the canvas paintings, and say, ‘Oh, I can’t paint,’ but the good thing is you actually draw that, you trace that design on your canvas with charcoal paper,” Killingsworth said. “It’s almost a paint-by-number- type thing. We teach you how to do the shading. So, you can do it. You just don’t realize you can do it. Everybody has a little bit of artistic ability in them.”

Crafters can make appointments online or just walk in off the street. Appointments allow for all your materials to be gathered ahead of your arrival and reserves spaces for working. You’ll have use of the Pinspiration paints and its embellishment bar — which features jars of buttons, glitter, beads, and ribbons.

“We have everything to do that project, and then you get to take it home with you at the end of the day,” Killingsworth said.

“It was really fun,” Brently said of the Splatter Room. “You can get your aggression out.”

For her splatter painting, which she plans to hang in her room, Brently went for wild and colorful.

“I wanted it to be full-on crazy,” she said.

Since Pinspiration opened in December, the Splatter Room has been one of the more popular activities, Killingsworth said. For $18, you get a canvas and use a selection of bright primary colors. You could even opt for glow-in-the-dark paints for an extra charge.

“There’s something therapeutic about throwing paint and making a mess,” Killingsworth said. “I don’t know — I can’t explain it, but I love it.”