This photo provided by Phillip Gregg shows a water slide on a Carnival cruise ship. Those who enjoy taking cruises cite the activities and food as the perks of taking a vacation cruise. 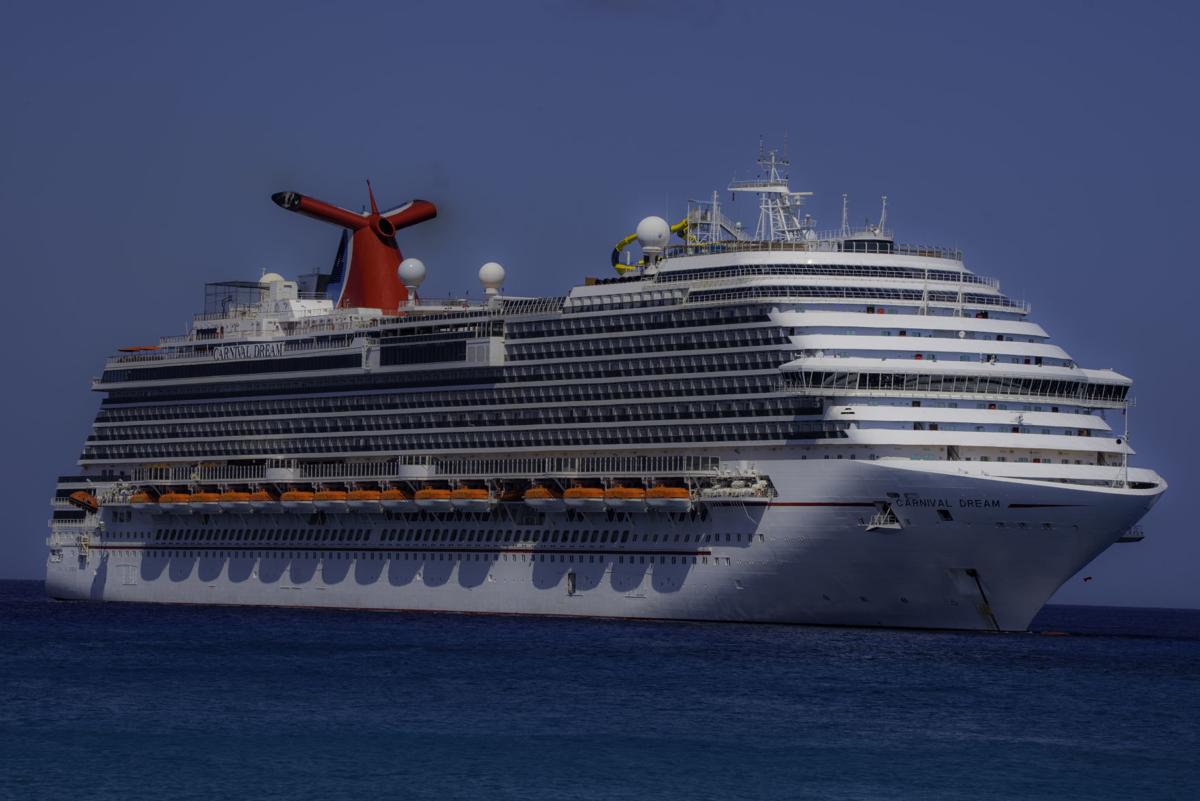 This photo courtesy of Phillip Gregg shows the Carnival Dream as seen from a smaller boat shuttling passengers.

This selfie provided by Phillip Gregg shows him and his wife, Patti, while on an excursion in Cuba. The two took a cruise to Cuba after the U.S. government lifted its travel ban to the island country. In two years, the two have visited 10 countries by taking cruises.

This photo provided by Phillip Gregg shows a water slide on a Carnival cruise ship. Those who enjoy taking cruises cite the activities and food as the perks of taking a vacation cruise.

This photo courtesy of Phillip Gregg shows the Carnival Dream as seen from a smaller boat shuttling passengers.

This selfie provided by Phillip Gregg shows him and his wife, Patti, while on an excursion in Cuba. The two took a cruise to Cuba after the U.S. government lifted its travel ban to the island country. In two years, the two have visited 10 countries by taking cruises.

“You get hooked on them,” said Phillip Gregg, a freelance photographer who lives in Dothan with his wife, Patti Taylor.

Their first cruise together was to the Bahamas. That was two years ago. Since then, the couple have visited around 10 countries and 18 port cities, all while cruising. They’ve been to Mexico, Honduras, Belize and Cuba.

The best time of year to take a cruise will depend on the destination. Peak and offseason months will vary for a Caribbean cruise versus an Alaskan cruise. But along with the destinations, the ship amenities and the ease of paying for your vacation in one package appeal to those who take cruises regularly.

Phillip and Patti said they have found taking a cruise is just as affordable as a vacation to a Florida beach, especially when you add up the cost of lodging, food and entertainment. Plus, they said, a cruise is fun.

These days, most major cruise lines feature not only swimming pools but water slides, putt-putt golf, spas, walking tracks, gyms, and a variety of restaurants. Carnival even put a roller coaster on top of one of its ships. There are formal nights where guests can get dressed up for dinner and excursions into port cities. Ships may have casinos and piano bars, and Facebook has made it easier for passengers to arrange meet-and-greets with fellow travelers.

“It’s such a variety of things, it doesn’t matter your walk of life or what your interests are, you can find something to do,” Patti said. “And then there are some cruises you’re like, ‘I want to go take a nap,’ and you just go take a nap.”

You can be as involved as you want in ship-sponsored activities, she said. There’s no pressure.

The cost of a cruise varies depending on the time of year and type of room you reserve — you can take a cruise for a few hundred dollars per person. Interior rooms are usually cheaper and are all you really need, according to those who cruise regularly, because you’re rarely in your room.

The cruise price includes most of your food and beverages while you’re on the ship — exceptions include alcohol and sodas. The price also includes entertainment and activities on the ship, excluding casinos. If you stick with the same cruise line, you are likely to earn points for discounts.

Shore excursions are extra, but can be scheduled and paid for in advance as well. Cruise lines will provide room cards that can charge expenses back to a credit card.

Roger and Gail Sanders went on their first cruise in 2007 to Key West and Nassau. They try to go on two cruises a year — one around New Year’s and another in early June. This year, the couple will embark on a Mediterranean cruise that will cross the Atlantic to come home and wrap up in New York City.

Gail said the couple enjoy the shore excursions and learning about the places they visit.

“We try to get some of the historical things everywhere we go,” she said. “Some people just hit the beach or the Margaritavilles, but I’m like what’s the point? I want to see what’s past the port doors.”

For Phillip and Patti, cruising has allowed them to get out of their comfort zones. Patti tried snorkeling for the first time, and Phillip climbed to the top of Mayan ruins even though he doesn’t like heights.

“I always thought cruising was unattainable, some fantasy, some dream that I could never, ever do,” Patti said. “Here in two years we’ve been on eight.”

If you’re planning to take your first cruise, you might want some tips from those who have taken a lot of cruises. While cruise line amenities will vary among the different companies, here are some things to look out for that might make the experience a little easier:

- Take patches or medication for motion sickness just in case. Green apples also help with sea sickness, according to Phillip Gregg, and the ship’s room service can supply you with some. Gregg also recommends putting an ear plug in one ear.

- Take a small portable fan. The white noise can help with sleep. Although, some people sleep better on a cruise ship.

- Irons are not allowed, so pack a wrinkle release spray. Also, cruise ships typically have a laundry rooms where you can do ironing or wash your clothes. The ship will clean and press your dirty clothes for you for an extra fee.

- Luggage typically slides under the beds, so go ahead and unpack when you get to your cabin. Roger and Gail Sanders typically designate one suitcase for dirty clothes.

- The ship will supply extension cords.

- Cabins have refrigerators and guests can bring sodas and water on board. Check with the cruise line on how many you’re allowed.

- It might be a good idea to pack some loose clothing as there are a lot of food options on the ship. It’s OK if you over pack, there’s no limit on bags or extra cost.

- Take a passport. Some ports will not accept anything but a passport book.

- Watch your time on shore excursions. The ship will leave without you unless you are on an excursion booked through the cruise line.

- Be nice to room stewards and other cruise staff and they will be very nice back, Phillip Gregg said.