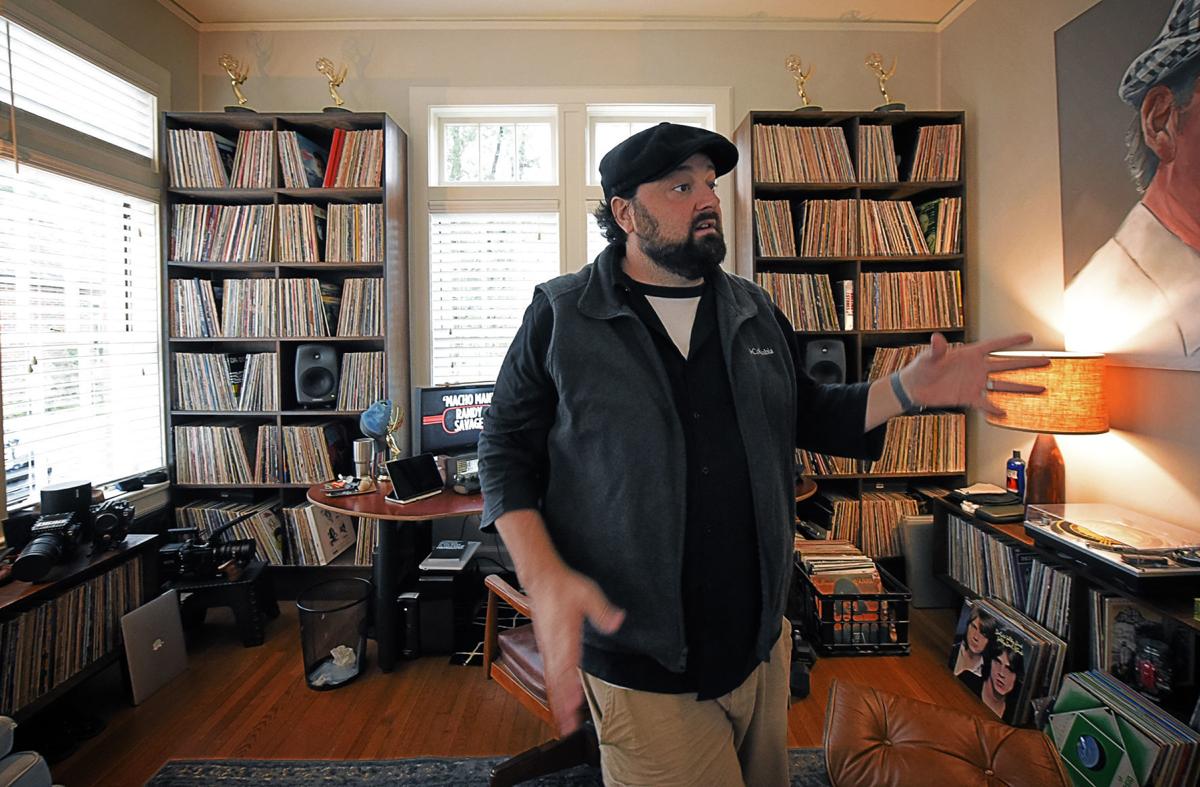 Cinematographer Harris Mendheim talks about his career inside of his home. 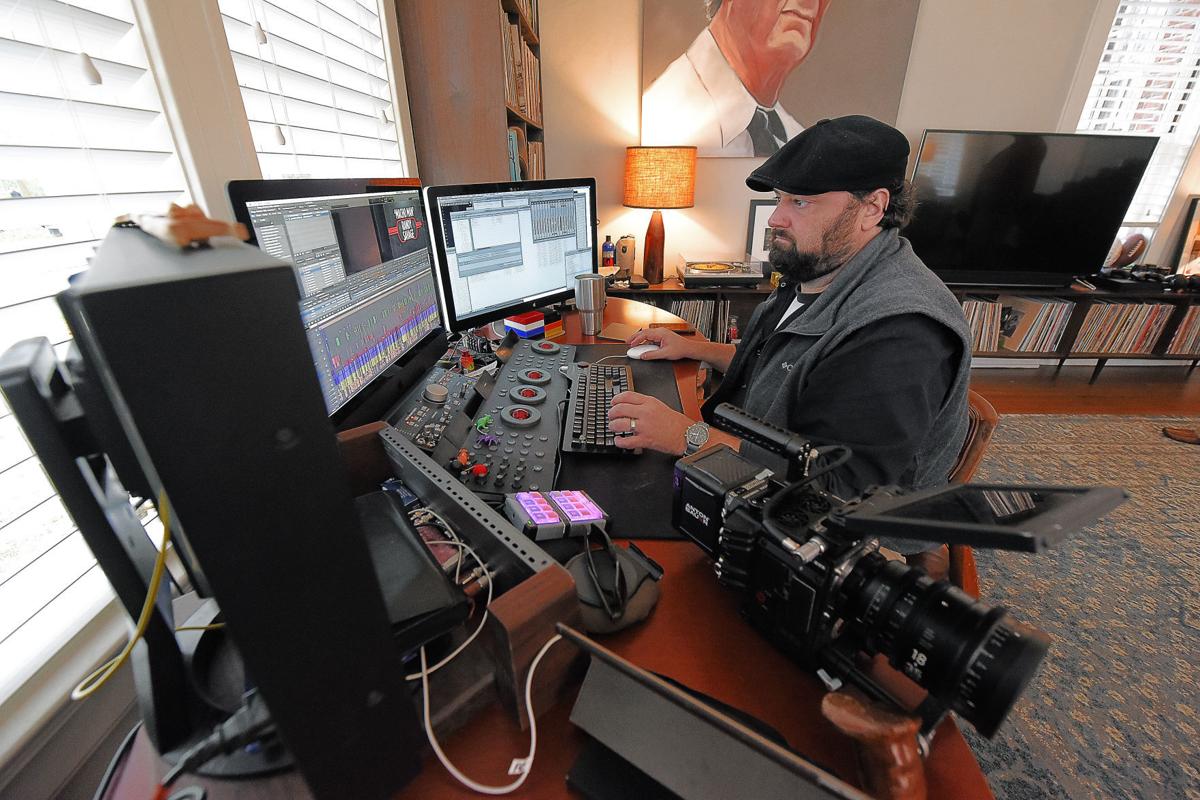 Harris Mendheim works on an upcoming project inside of his office.

“The good thing about my situation is I can do this for six weeks and then I can jump off and go shoot something for a week or two,” Mendheim said. “Every project is different.”

Mendheim wears a lot of hats in his profession as an Emmy Award-winning cinematographer, editor and engineer working in television and film.

“The last couple of years have been pretty special from a content standpoint,” Mendheim said.

A trophy for winning the 2017 Sports Emmy for outstanding camera work for the 143rd running of the Kentucky Derby sits off to the side of his workstation.

“The last six or seven years of the Kentucky Derby, my position was on the track where the horses run by,” Mendheim explains.

Through the years, he’s had the opportunity to work some of the biggest sporting events in the world.

“I went to South Africa for the World Cup in 2010, I’ve been court side for the NCAA Final Four, standing at the finish line of the Indy 500 and watching Tiger Woods tee off on 18 ... Super Bowls, you name it,” Mendheim said. “I was there when Michael Phelps won his 47th and final gold medal, whenever that was.”

Fact is, Mendheim has had duties at so many events he has trouble recalling them all.

“Pretty much if you name it, I’ve done one of them,” Mendheim said. “My joke was I had to do 20 gymnastics meets to do one Super Bowl. I did a lot of years of a lot of sports that weren’t really my cup of tea. It wasn’t until the last couple of years that I started to do some college football.”

A 1996 graduate of Northview High School, Mendheim played football at Georgia Tech as an offensive guard before injuring a shoulder during his sophomore year.

“At some point when I was up there, I decided I wanted to work in films and make movies,” Mendheim said.

While a college freshman, he had an idea for a film about an old man coming to grips with death and called on high school friend Russ Parrish, who was a student at Birmingham Southern.

“I told him I wanted to make a short (film) — that I had written this thing and I wanted him to look at it and help me with it,” Mendheim said. “He ended up looking at it, and he decided to rewrite it, which is the story of my writing career,” he added with a chuckle.

With the help of two acquaintances Mendheim met in Atlanta with the necessary equipment, the short film “Rough Crossing” was filmed in Dothan.

“I don’t even know how we paid for all of that,” Mendheim said. “I guess we begged, borrowed and stole, basically.

“Russ entered it into the George Lindsey Film Festival in north Alabama and we ended up winning the short competition in the one and only festival we entered it into.”

After that, Mendheim and another friend in Atlanta started their own production company. Their first feature-like documentary, called “Mullet Men,” centering on the annual mullet toss event on the beach outside the Flora-Bama lounge in Gulf Shores, would be a hit.

It starred another childhood friend, Andy Stuckey, who was living in New York and making a living with jobs in the television industry. Mendheim planned for Stuckey do go around interviewing people during the contest for the documentary. Stuckey, though, envisioned entering the mullet toss and winning it.

“Long story short, we ran around like a bunch of idiots for two or three days and Andy ends up winning the mullet toss,” Mendheim said.

“We had this stuff shot and we were like, ‘All right, what do we do with this stuff now?’ We had bought an editing computer. I poked around trying to find people who could edit, but I couldn’t pay. Before long, I was teaching myself how to edit.

“Just about anything I’ve ever done, I’ve had no idea what I was doing. We just figured it out.”

The short film premiered at the Dothan Opera House before a packed house.

“We did a bunch of screenings of “Mullet Men” for a year and a half after that,” Mendheim said. “We would go rent places out and sell tickets.”

Once graduating, Mendheim moved to New York during the summer to pursue his career. He and Stuckey shared a loft in Brooklyn.

“I loaded up everything I owned in a 26-foot Ryder truck and drove myself to New York,” Mendheim said.

He would be introduced to someone, ironically named Harris, who lived in the same apartment building and was in television work with a company called Production Resource Group. It’s touted as the largest single supplier of lighting, audio, video, scenic and automation in the world.

“The other Harris was doing the road engineering for this, but he didn’t like to travel and they were looking for someone to start doing the road work,” Mendheim said. “Fast-forward to that April and they sent me to my first Kentucky Derby as the engineer. I was 23.”

What have you been reading? The Expanse. It’s a science fiction series.

Who do you most admire? My dad. He’s been gone for a while. I hope that a little bit of him rubbed off on me and I’m trying to teach my kids the things he taught me that have allowed me to succeed in the ways I have so far.

What do you do to relax? Just not be on the road.

Bucket list of items? You know the one that got away from me is the Masters. I got called to do it the weekend that Bay and I got married. I was driving all of her stuff up to New York. I got this U-Haul full of stuff and we’re newlyweds driving to New York. I got a call that they had an editor walk off the show at the Masters and wanted to know if I could be on the first flight down there. I was looking around at my wife and U-Haul and was trying to run it through my head. I didn’t do it, thankfully. I haven’t got a call back from the Masters.

Now 41, Mendheim served as a cinematographer on the eight-part “Saturdays in the South” documentaries on the history of SEC Football which has aired on ESPN and the SEC Network this fall.

“There was so much going on behind the scenes that I was starting to get worried about how this thing was going to turn out,” Mendheim said. “But, in the end, I saw it and I thought it turned out great.”

He worked on another project for ESPN called ”My Story,” which aired this past year during the 150th anniversary of college football.

“We went and interviewed 400 people and do about 600 stories and they picked 150 of them to release, one a day,” Mendheim said. “These are one-minute stories of these people telling something special that makes up the fabric of college football. I went and shot them all and color and edited all in the house here.”

Mendheim keeps an apartment in New York, but with a wife and two children, he now spends the majority of his time working out of his Dothan home.

“I turned down more work this year than I did in my first three or four years of working,” Mendheim said. “In any given week, I may have three or four things going on.

“To be honest with you, it’s a small circle of the same people who do all of this work.”

“Things can go sideways, and this business can be not for the faint of heart,” he said. “I wanted to work in film and make movies, and this is what I’m doing. This is as close as we got.”