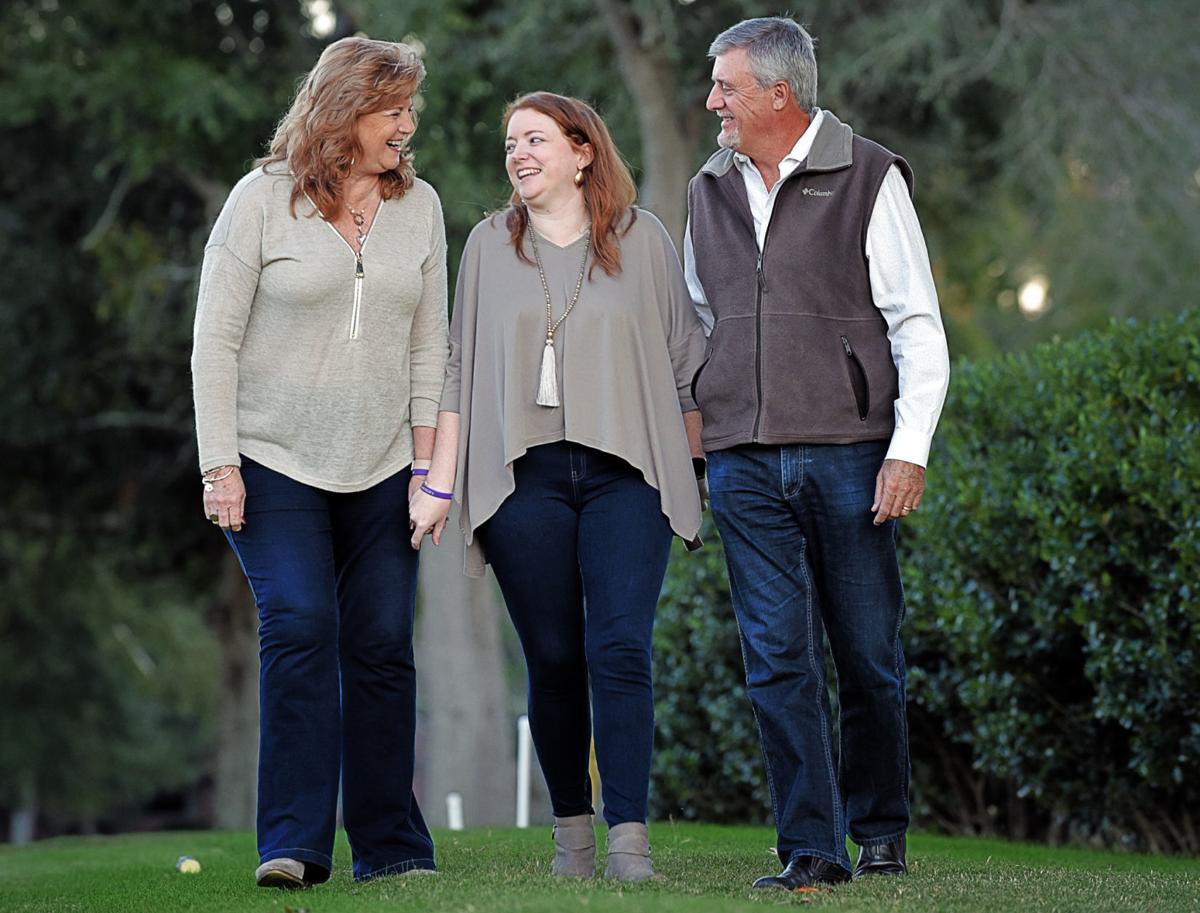 Jackie Turner walks with her parents, Angelia and Cal, near their home. 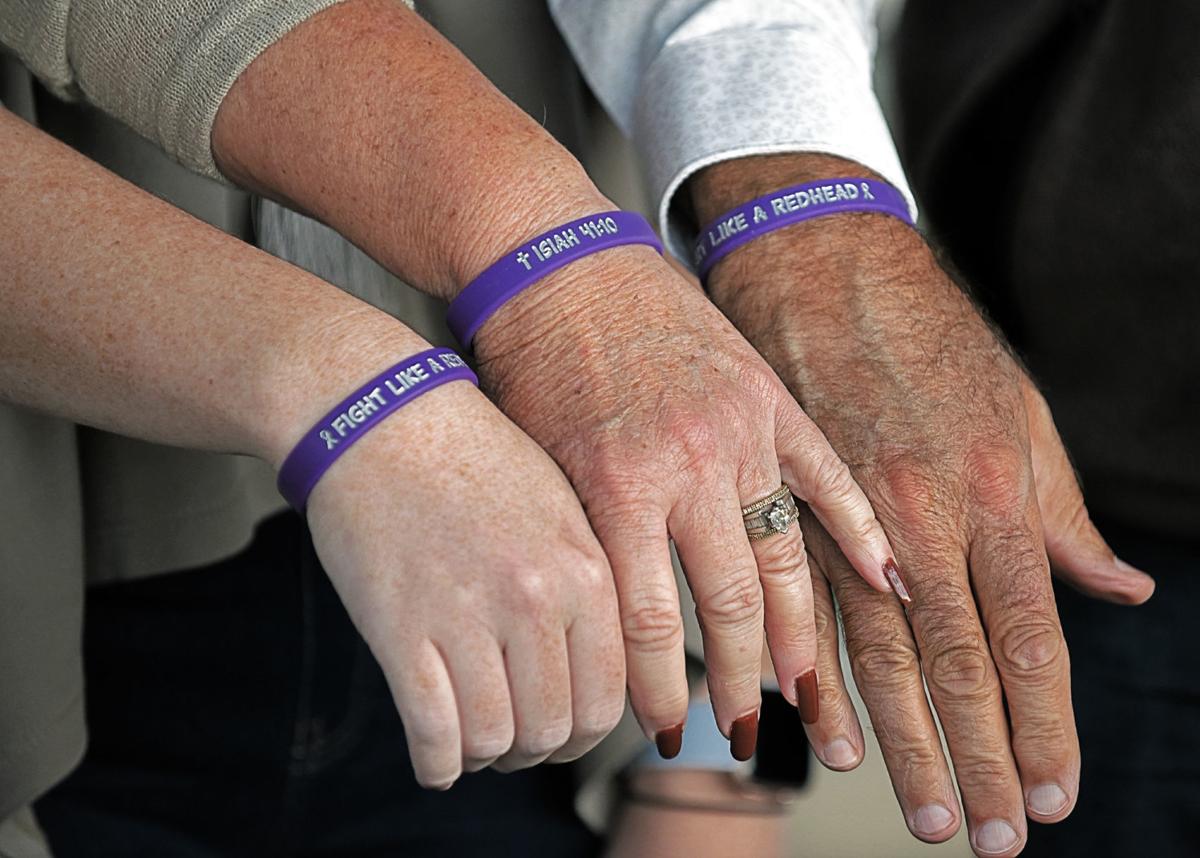 The Turner family with their "Fight Like a Redhead" bracelets.

Jackie Turner walks with her parents, Angelia and Cal, near their home.

The Turner family with their "Fight Like a Redhead" bracelets.

Redheads have a reputation for being feisty.

There’s even been research on their toughness, specifically whether the genetic traits for red hair makes them more tolerant to certain types of pain.

At 29, Dothan native Jackie Turner showed just how tough a redhead can be facing and recovering from a brain tumor. And while she and her parents, Cal and Angelia Turner of Dothan, have always been close, the past year bonded the family even more.

“We all felt a peace during this,” Angelia said. “It was kind of like we were living it but not really living it. I personally never had an overwhelming fear. I just knew that everything was going to be OK.”

Jackie had always been a healthy child and rarely went to a doctor even as an adult. Growing up in Dothan, she graduated from Providence Christian School and attended Calvary Baptist Church with her family. There were few places she could go in Dothan without someone knowing her parents — Cal through his position at Bob Woodall Air Care and Angelia through her marketing business and her role as tournament coordinator for the annual Press Thornton Future Masters golf tournament.

On Sept. 17, 2018, Jackie was sitting at her desk at Alabama Mentor in Montgomery, where she worked as a social worker. She had a headache and put her head down on her desk. After that, she doesn’t remember much.

She lost consciousness and was taken by ambulance to a Montgomery hospital. An MRI of her brain revealed a mass in her right temporal lobe. A biopsy later identified the mass as a low-grade glioma, a type of tumor that develops in the brain or spinal cord and forms in the supportive tissue of the brain. The good news was the glioma was low-grade, meaning it was slow-growing and highly treatable.

Jackie was referred to UAB Hospital, where a team that included a neurosurgeon and an oncologist took over her care.

Doctors scheduled Jackie’s surgery for Nov. 6. The surgery took about 10 hours and required precision to ensure the surgeons got as much of the tumor as possible without causing damage to Jackie’s temporal lobe.

Multiple brain scans were done to determine the best position for Jackie’s head during surgery. She saw a neuro-ophthalmologist to set a base line for her vision.

A speech pathologist also met with her to go over images and questions that Jackie would be asked during surgery. Yes, doctors woke Jackie up twice during surgery to test her vision and speech and make sure they were not getting too close to nerves and areas of the temporal lobe that would cause damage. There was fear she could end up with a blind spot in her left eye.

The possibilities of what could happen were numerous. But Jackie went from a fear of being left debilitated to feeling peace about whatever the outcome.

“I felt fine,” Jackie said of going into surgery. “I know I’m about to be wheeled into a big surgery, and they’re about to open my head up. It’s hard to describe. … I was peaceful. Whatever happened … I left it in his hands.”

From the day of the diagnosis, the family had a sense that whatever happened, Jackie would be safe.

The morning Jackie lost consciousness at work Cal was sitting in his office at Bob Woodall Air Care, where he is vice president and chief financial officer. Cal felt a presence. He never heard anything, but he felt like his father — who had been gone for years — was with him.

“It was like my dad was sitting there,” Cal said. “It got stronger, and it was very peaceful. It was probably the most peaceful I’d ever felt in my life. I just backed up my chair and closed my eyes, and I saw this warm glow of soft, warm light — didn’t hear any words, but felt very peaceful. It was like my dad was saying, ‘Here’s the Holy Spirit. You need to listen.’”

The light began to blink and turn red. Cal had a strong feeling about Jackie and texted her. She was fine; getting ready to go into the office after a work trip to Auburn the day before. He texted Angelia. She, too, was fine.

Around 3:30 p.m., he got the phone call from Angelia about Jackie being taken to the hospital.

“I look at it as preparation,” Cal said of his morning experience. “The message I got was ‘You trust me. Whether she’s with you or she’s with me, she’ll be safe.’”

After her craniotomy, things were looking good until Jackie started to have trouble talking and remembering things. The right side of her head was swollen from the surgery, which left a horse shoe incision closed with 52 staples and one stitch. Opening her jaw caused excruciating pain. She kept telling medical staff that it was 2015 instead of 2018. She was agitated with questions and requests to count back from five.

“She had about three really, really bad days. … It was trying,” Cal said. “It was like us getting a glimpse of what could be. We had a couple of really tough nights.”

The family had a tremendous prayer support — getting texts at night from friends and family who were praying and thinking of them. Angelia and Cal took turns staying in the room with Jackie.

Jackie’s best friend, Meloney Faulk, decided to have some bracelets made to show support for Jackie. The rubber stretch bracelets are purple — Jackie’s favorite color — and feature the phrase “Fight Like a Redhead” and refer to Isaiah 41:10, a favorite verse of Jackie’s:

“Do not be dismayed, for I am your God.

“I will strengthen you and help you;

“I will uphold you with my righteous right hand.”

A week after the surgery, Cal and Angelia brought Jackie back to Dothan to recover. Follow-up MRIs, which Jackie has to do every three months, have been good and doctors opted to forego additional cancer treatments like radiation and chemotherapy.

Jackie returned to Montgomery and her job in January, staying with an aunt and uncle until she got a new apartment in late February. She’s down to one medication, an anti-seizure drug taken as a preventive measure.

Today, the Turners say the experience made them closer and helped them be able to talk about the scary things that families face. It casts everything in a new light, making them thankful for each day together and has given them a better appreciation of life. Faith, Cal said, prepared them for the tough times.

Jackie recently marked her one-year “crannivesary,” and the family celebrated with a Mediterranean cruise with stops in Spain, France and Italy.

“As far as what’s ahead, of course, we don’t know the future,” Jackie said. “That’s in God’s hands. … I wanted to fight like a redhead. I didn’t want to go anywhere yet because I feel like I’ve still got a lot to do.”