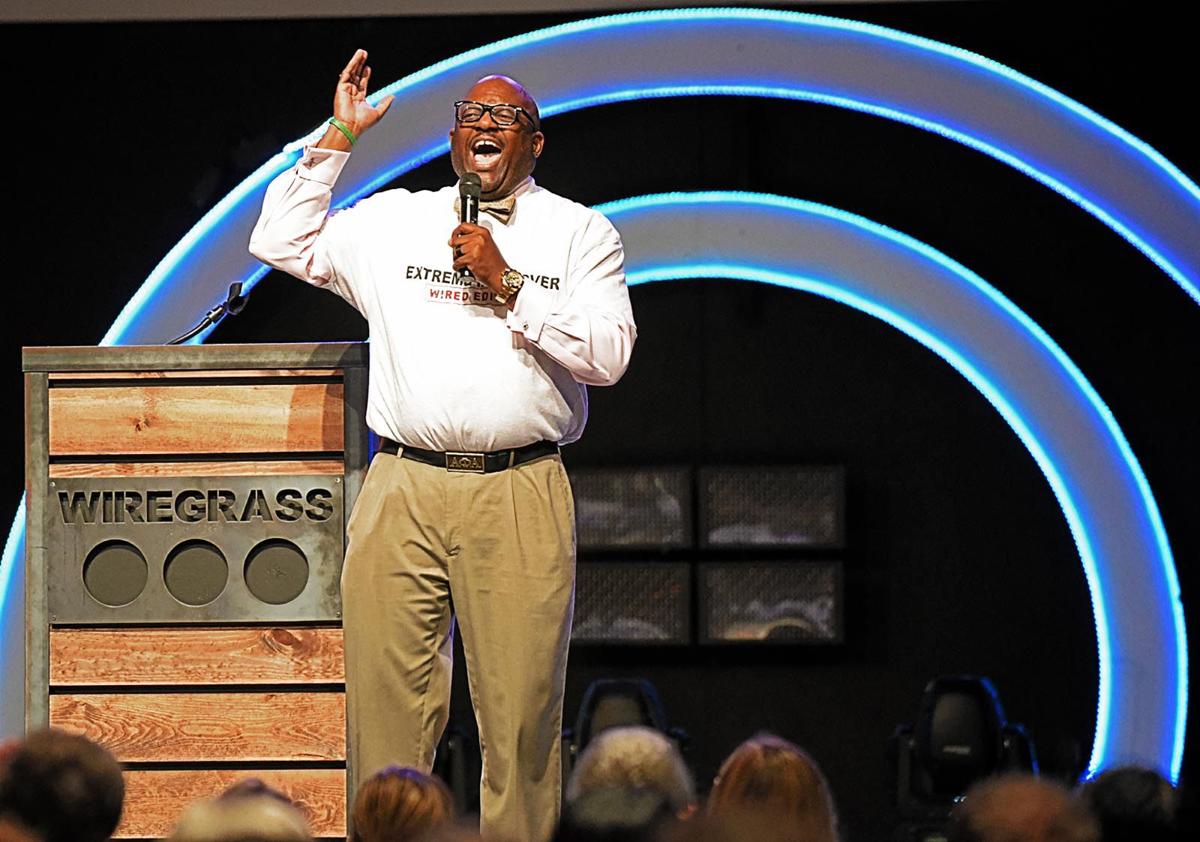 Scott Faulk, director of safety, security and attendance for Dothan City Schools, ignites a crowd of educators during the school system's annual institute at Wiregrass Church on Friday morning. 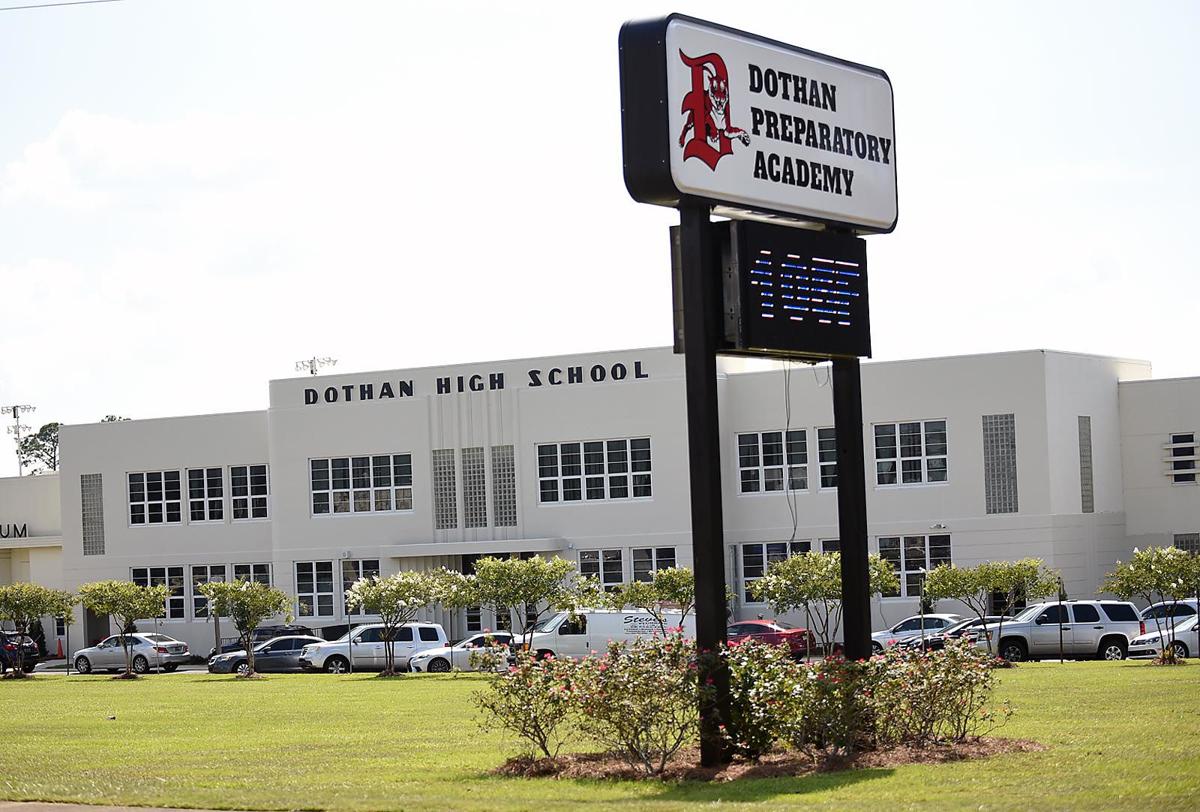 Students will begin classes at Dothan Preparatory Academy on Tuesday.

Scott Faulk, director of safety, security and attendance for Dothan City Schools, ignites a crowd of educators during the school system's annual institute at Wiregrass Church on Friday morning.

Students will begin classes at Dothan Preparatory Academy on Tuesday.

Teachers are poised to take the helm as they enter the new school year, which is only days away now. By and large, they are embracing being at the forefront of change as they adjust to new regimens, new schools, and policies.

Sam Davis, who teaches seventh grade American government, economics and geography, said he was initially anxious about the restructuring effort that plucked him away from his home at Beverlye Magnet School and placed him at Dothan Preparatory Academy. Davis began his teaching career 12 years ago at Beverlye.

“Anytime there’s change, there’s a little apprehension. You’re a little bit nervous because you really don’t know how everything is going to be,” Davis said at Dothan City School’s opening day event on Friday. “So far, it’s been really good. I think change can be for the better. I feel a real positive vibe as we’re moving forward.”

In November 2018, the Dothan City School board decided to close three schools and repurpose a fourth to house pre-K classrooms and central office in a restructuring effort to prevent a financial crisis caused, in some part, by students fleeing the system in large numbers every year. Two high schools and three middle schools were consolidated in the process.

With all middle schoolers housed in a single facility at the former Dothan High campus, Davis said he has been able to communicate with all of the junior high civics teachers for the first time.

“Before, I was the only civics teacher at my school,” he said. “Now, I have four other civics teachers that I can co-plan with, so it’s really beneficial and can make teachers better because you can bounce ideas off others.”

Teachers from each content area will meet every Friday to collaborate and create lesson plans together, and teachers grouped by grade level will also meet to discuss curriculum, student behavior and instructional practices.

“Anytime you have more people involved, there’s wisdom and counsel,” Davis said. “You get more people, you get better ideas, you can refine ideas, and I think that’s almost an overlooked aspect of the consolidation.”

One longtime special education teacher in the district came out of a short-lived retirement to be a part of the change.

“I retired and I cried the whole time,” said Barbie Nelson, a 44-year veteran of school district. “It lasted two days… Both of my bosses called me and they just said, ‘Barbie, we cannot find anyone for your class and usually when people retire, they’re happy and all you’ve done is cry, so what do you think?

Nelson spent the last 21 years at Northview High School and will be continuing her service there under the building’s new moniker, Dothan High. The change has been an adjustment, but she is positive about joining the wolf pack.

“I still want to say ‘Welcome to the View,’” she said. “This is a big one. I think like everybody, I was really nervous, but I’m very positive. I feel like that it’s important to be positive and let kids know we’re ready for them, we’re going to be there for them…. And I’m just ready to say ‘Go Wolves.’ ”

Institute Day, held at Wiregrass Church on Friday, was filled to the brim with more than 1,000 district teachers and employees in its large auditorium. More than a hundred were new faces, but many teachers will be new faces in unfamiliar territory due to many transfers.

“It’s all kind of new to me… but it makes me want to help out any way that I can because I know there’s a lot going on. I want to be available and help where I can,” said Beverlye Intermediate Spanish Teacher Holly Driver, who recently relocated to Dothan for the position. “I’m excited.”

She had the opportunity to sit down with ancillary educators who teach art and music at the school for the first time on Thursday and meet other fellow faculty at opening day on Friday.

“They’ve kind of taken me under their wing so far. I’m looking forward to working with them,” Driver said.

Superintendent Phyllis Edwards touted many positive changes the system endured in recent months and asked teachers, old and new, to be positive about the changes.

“Even though we’ve got hurdles and we’ll have bumps in the road, I’m going to ask you to be positive and have that attitude of gratitude,” she said. “We are lucky that we’re here. We’re lucky that we are at this forefront of change. We can make a difference.”

One pleasant piece of news for teachers is the premiere of a new purchasing card that will be loaded with state-issued supply funds for their classrooms.

This year, teachers will get more each than they ever have before. The education budget passed in the recent legislative session approved $600 for each teacher, up from the $536.07 issued last year.

“It really goes to show that our community is invested in education,” Dothan Education Foundation Executive Director Lindsey Foundation said in a press release. “We believe it was important for the community to show support towards the massive amount of work that has been done this summer by all the Dothan City School staff to prepare for the first day of school.”

Wiregrass Church donated the venue for the 2019 DCS Institute event, and supporters like Comcast, BBVA and other companies provided breakfast snacks, lunch gift cards for DCS teachers and appreciation bags.

A Comcast representative awarded giveaways and promoted Internet Essentials, an initiative that provides low-cost internet service at $9.95 for low-income families on government assistance.

“This program is our way of bridging the digital divide to individuals so they can have access to internet,” said Stefanie Bowden, external affairs representative for Comcast.

Schools have been conducting open houses this past week, and teachers will be back to work on Monday, Aug. 19. Students will start on Tuesday, Aug. 20.