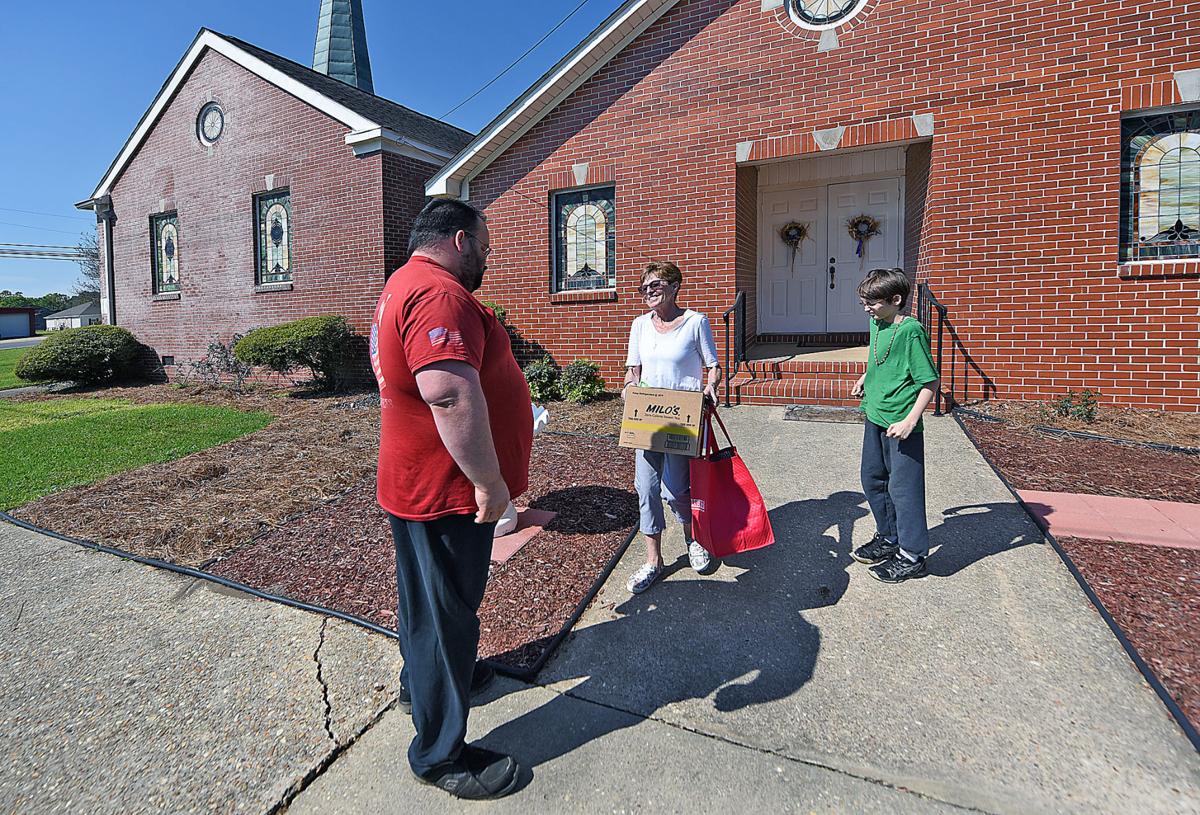 At First United Methodist Church in Slocomb, the Rev. Theresa Howard delivers food to James Sanders and his son Tony outside of the church on Friday. 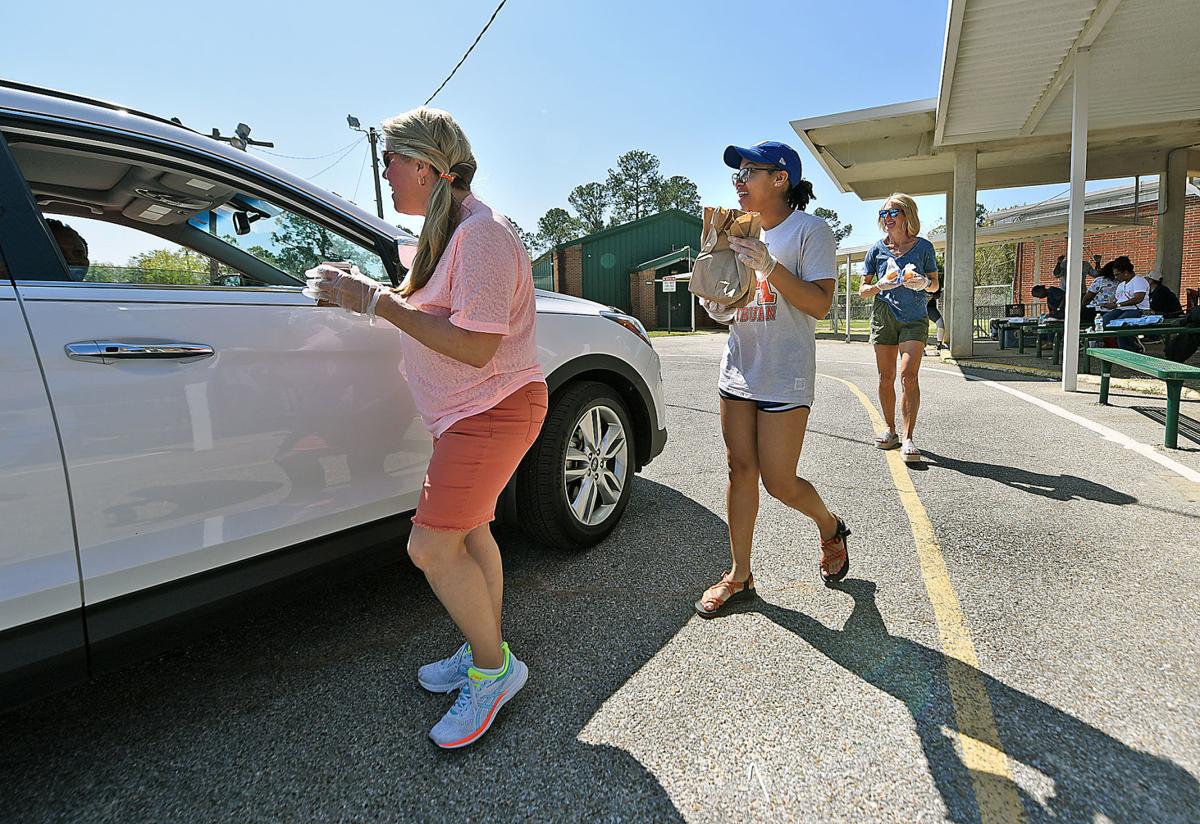 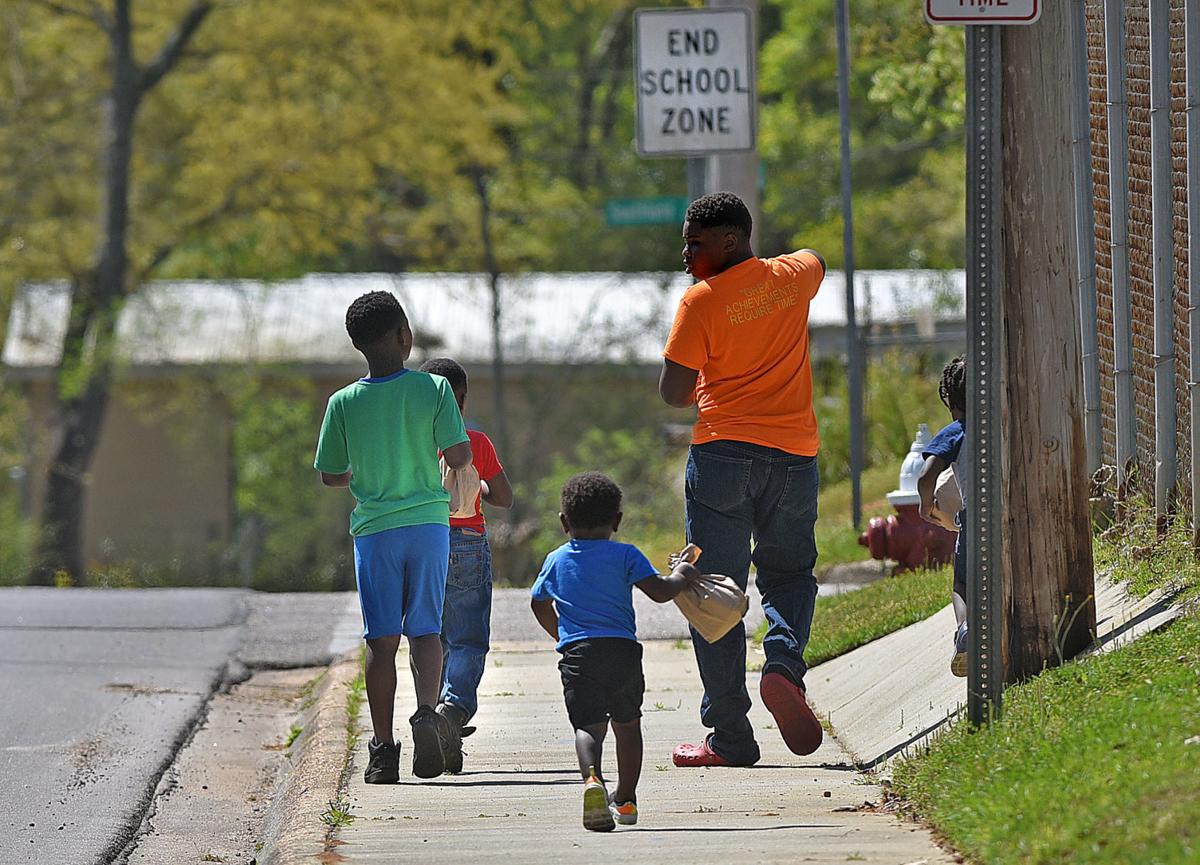 A group of children walk home after getting lunch bags at Selma Street Elementary School on Thursday.

At First United Methodist Church in Slocomb, the Rev. Theresa Howard delivers food to James Sanders and his son Tony outside of the church on Friday.

A group of children walk home after getting lunch bags at Selma Street Elementary School on Thursday.

While anxious shoppers emptied grocery store shelves around the Wiregrass, the Rev. Theresa Howard worried about school closings and children who might go hungry with no school meals in their bellies.

Schools closed around Alabama this week due to the growing number of cases of COVID-19, a respiratory illness caused by a new strain of human coronavirus. School systems, nonprofits and churches scrambled to create meal-distribution plans that protected public health while keeping children fed during the closures.

In Slocomb, Howard decided to do food packages for families with children. And even with Geneva County Schools doing a curbside meal program, there was enough need in the Slocomb area — especially during spring break — to go ahead and do the food boxes, Howard said.

Along with a hot meal in insulated bags, volunteers at the First United Methodist Church in Slocomb packed boxes containing milk donated by Working Cows Dairy and enough food items to get a family by for a few days until the church hosts another food day, which Howard plans to do each Monday and Thursday as long as kids are out of school. Thursday, the church had 30 food packages ready for those who signed up.

James Sanders stopped by the Slocomb church to pick up one of the food packages for his family so that his sons would have some good meals while school is out. The family, Sanders said, can’t afford to spend a lot of money stockpiling food.

“It’s not so much the virus; it’s the fear behind it — the panic setting up,” he said.

“People can’t always help the circumstances in which they find themselves and so, therefore, neighbors step in and lend a hand,” Howard said. “And that’s what we’re doing.”

Most Wiregrass school districts began curbside meal programs, allowing anyone 18 and under to get a free meal. Some, like Geneva City Schools, took food donations to pack boxes of food for students to have at home.

Geneva County Schools has had staffers handing out meals at schools in Samson, Slocomb and Hartford. The curbside meals will cease during this week’s spring break but will resume March 30-April 3 from 10:30-11:30 a.m.

Ozark City Schools is preparing lunches at the Autrey Center and will have meals available March 23-April 3 between 11:30 a.m. and 1 p.m. under the canopy at the Senior Center at 390 Carroll Ave. The school system also plans to deliver meals to several pickup locations around the city from March 30 to April 3. For more information, call 334-774-2042.

Dothan City Schools is doing curbside meals at designated schools. Those will stop for spring break and resume March 30.

At Selma Street Elementary School last week, school staffers and volunteers gathered under an awning, waiting for car traffic and kids who walked up to get their meals. The school handed out more than 200 meals in one day.

“All children need to eat, and we’re doing our part to make sure that we at least can give them one meal and a snack,” said Jessica Crenshaw, the acting manager of Selma Street Elementary’s nutrition program being utilized to feed children during the closures. “If you have a child, bring them so they can have a lunch. That’s one less meal that the parent has to provide.”

It’s not just school children who may be in need as time goes on.

At the Wiregrass Area Food Bank, the staff conducted its regular Brown Bag program to feed senior adults through a drive-up system. Food Bank Assistant Director Julie Gonzalez said the organization is encouraging its member food pantries to offer curbside options for those in need instead of having people come inside their organizations.

The need for assistance is likely to increase as the public-health crisis continues, Gonzalez said.

“It’s going to get worse before it gets better. I don’t think we’ve really seen the real increase that is going to happen yet,” she said. “The grocery stores haven’t been empty for more than a week yet. As soon as people run out of the supplies they’ve already purchased, then we’re going to see a real increase need in food assistance through our member agencies.”

For more of the latest news on the coronavirus, click here: http://www.dothaneagle.com/coronavirus