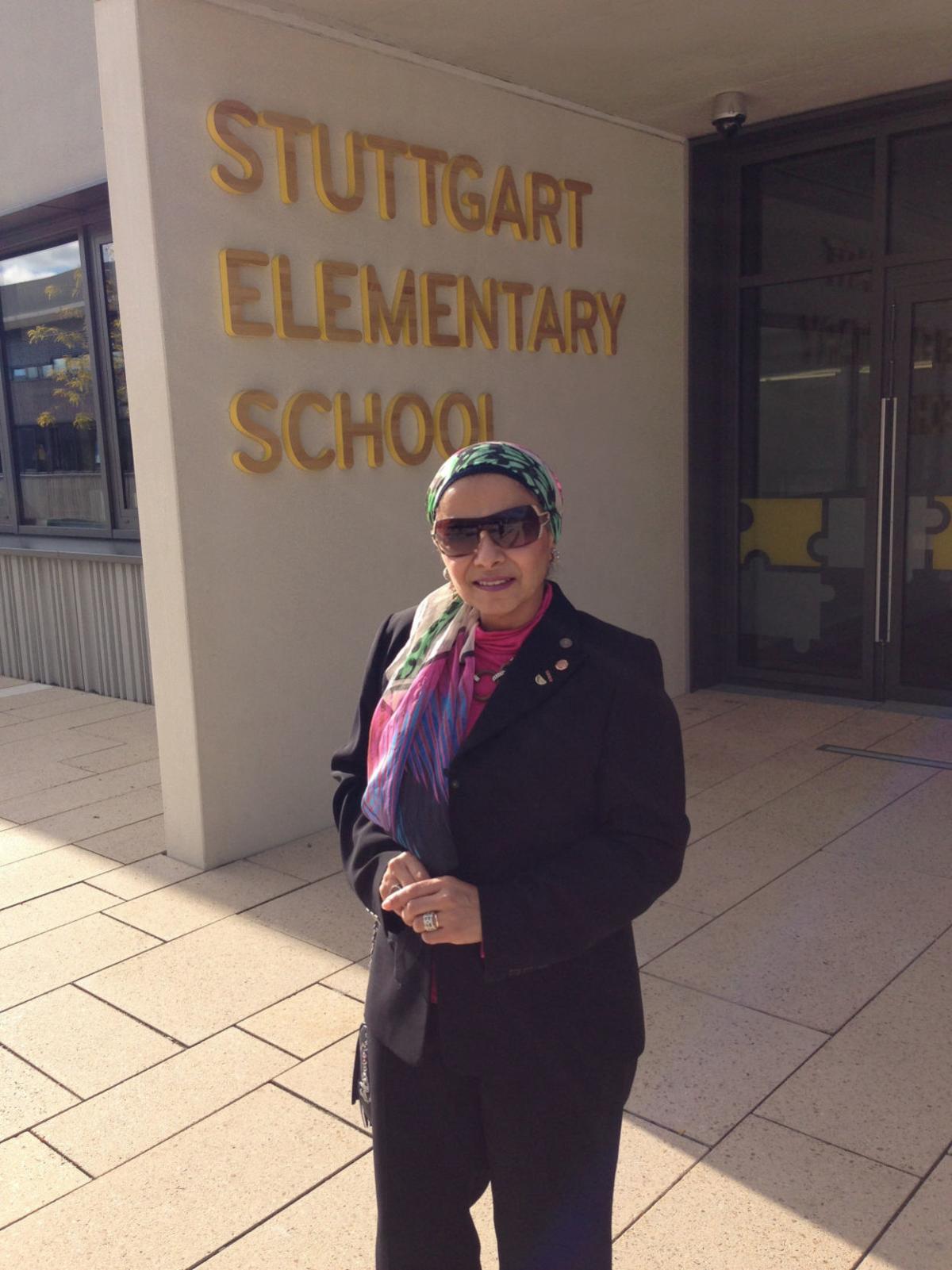 Manal Ezzat was an engineer at the Pentagon on Sept. 11, 2001. She designed a space where people of different religious faiths can worship. 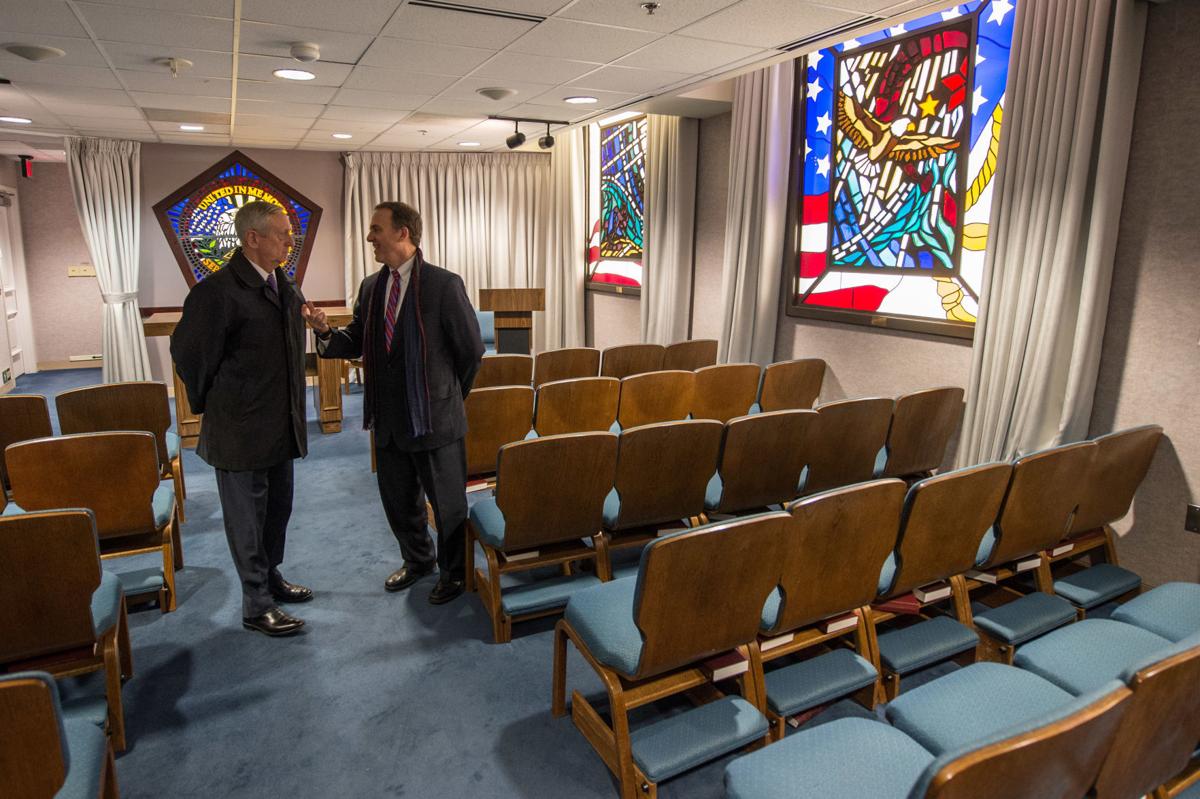 Jim Mattis, then the defense secretary, visits the Pentagon Memorial Chapel in 2017.

WASHINGTON - Eighteen years ago on a September morning she'll never forget, Manal Ezzat fled from the burning Pentagon building in such a panicked rush that her hijab fell off.

The next day, when the fires were still burning, Ezzat set to her task of rebuilding. Her vision, and the work of a huge team of public servants, led to what arose from the ashes: a new use for a site forever marked by tragedy.

REMEMBERING 9/11: See a collection of photos from Sept. 11, 2001 and the days that followed in a gallery at the end of this story

Today, at the very spot where the plane piloted by terrorists crashed into the Pentagon, there is a chapel. Eighteen years after the mass murder of 184 people here, U.S. military employees of every faith gather daily to pray.

"There was a lot of emotion built into that effort," Ezzat said this year, as she contemplated the anniversary of a day she still can't fully comprehend. "We just wanted to make it a peaceful place that could help wipe away the tragedy."

Ezzat, an Army Corps of Engineers employee who was project manager for the Army's space in the Pentagon at the time of the attack, knew right away when she and her co-workers were charged with designing the reconstruction that she didn't want to make that segment of the Pentagon into office space again. No one would want his or her office there, she reasoned. Instead, she searched for a meaningful new purpose.

What emerged was a quiet sanctuary with cushioned blue seats and prayer books from several denominations. Stained glass windows pay tribute to those who died here: "United in Memory, September 11, 2001." Anyone who wishes can walk next door to a memorial, where every victim's name is written on the wall, and their life stories, as written by their loved ones, are told in two thick books. Pentagon employees who just want to visit the chapel without stopping at the memorial can enter through alternate doors.

A schedule posted on the wall shows Episcopal and Lutheran services every Wednesday, Hindu services and Jewish study sessions every Thursday, Greek Orthodox services every Friday, Buddhist prayers twice a month, and more.

The chapel's most frequent users, according to chaplain Monica Lawson, are the Catholics who attend daily Mass there and the Muslims among the Pentagon's massive workforce of 26,000 people. Some Muslims who pray five times a day, as is traditional, visit the chapel when they need a private space to pray. As a group, Muslims pray daily in midafternoon in the chapel and host a service with a sermon every Friday.

For Ezzat - who is Muslim and who was bothered by those who blamed her entire religion because the terrorists who attacked the Pentagon were Muslim extremists - seeing Muslims who are devoted U.S. military employees at prayer in the chapel is fulfilling.

"On a personal level, I heard things, negative things. . . . You'd hear it in the hallways and the corridors. 'Oh, those idiots did this and did that.' It hurt me," she said. She wanted to argue - to say that the terrorists were a few horrible people, not representatives of her religion. But she brushed it off. "I'd hear it and get upset over it, and a minute later, I'm done with it," she said.

Qawiy Abdullah Sabree, a cybersecurity expert who has been a civilian employee at the Pentagon for 27 years, goes to the chapel every day, sometimes twice on Fridays. He often finds himself bowing to say Muslim prayers alongside co-workers who might be reading from a Christian prayer book, standing for Jewish davening or sitting in quiet meditation.

Sabree was just feet away from co-workers who were killed when the plane hit the Pentagon. Had he not stepped away to talk to another employee, he says, he would have died with them. "It's something you do not forget. And so you remember it and keep it from happening again, ever," he said. "That space where the chapel actually is, it's a reminder."

Lawson, who is an ordained elder in the African Methodist Episcopal Church and one of three full-time chaplains stationed at the Pentagon, said she sees this chapel as an exemplar of the American values that the terrorists couldn't destroy.

"Every day that I come in here, I think about that," she said. "It's a reminder of how privileged and honored we should be that we live in a country where we can worship here at work. The first day I started here, it hit me, the significance - where the chapel is located."

While the other two Pentagon chaplains are both Protestants like Lawson, the staff chaplains work to recruit qualified leaders for services for all other faith groups that want to use the space. "We all say 'one nation under God,' " she said. "When you walk in and you see that, and people are respectful of one another's religion, it's a blessing."

Ezzat said she appreciates that her team created a prayer space where Muslims who devote their careers to America's security can worship, in the very space where extremists attacked. "The faithful prayers which take place in this space, whether it's Jewish prayer, Islamic prayer, Christian prayer, I think it's beautiful," she said. "In Islam, we believe prayers - supplications - to the dead reach them, wherever they are."

The rush to rebuild the Pentagon was all-consuming. The young service members who give tours of the Pentagon to visitors still brag about it - how the construction team was told to rebuild in three years, and managed to do it in less than one. How they worked almost 24/7 to do it, and then donated all that overtime pay, about $3 million, to pay for this chapel and memorial and to support victims' families.

At the end of that year, Ezzat was exhausted, and overwhelmed from grieving for the co-workers she lost. "When I worked at the Pentagon, I just felt I was with my second family. . . . It just destroyed me," she said. "I needed to get out of here. The building brought back a lot of bad memories. I just couldn't stay."

Ezzat received a doctorate in structural engineering and then worked in private practice before joining the Army Corps of Engineers. Her first role in the Corps was working on the renovation of the Pentagon, a years-long project that was underway when the 2001 attack took place.

Ezzat says her earlier work reinforcing the exterior of the building, a costly project she had fought to get approved, saved lives when the terrorists attacked. The floors above the crash site collapsed more than 20 minutes after the initial impact, enough time for everyone there - Ezzat says it was 1,500 people - to walk out alive.

When the reconstruction that included the chapel was done in 2002, she requested a transfer out of the Pentagon, and got it.

When she herself prays, five times a day, she prays alone.

Today, she is the program manager for Defense Department schools, which educate military members' children around the world. Ezzat, who came to the United States from Egypt as a young child, says she can't imagine a job she would want more than supporting the service members who defend American ideals.

With almost 25 years in the Corps under her belt and a new grandchild drawing her attention, she is starting to think about retirement.

She remains proud of what she built out of tragedy 18 years ago, the time she created a religious haven out of wreckage. "It's part of the healing process," she said.

Memorable moments from Kobe Bryant's memorial: Tears from a comic, a mom and a legend

World's oldest man, who said secret was smiling, dies at 112

What you need to know about tonight's South Carolina debate