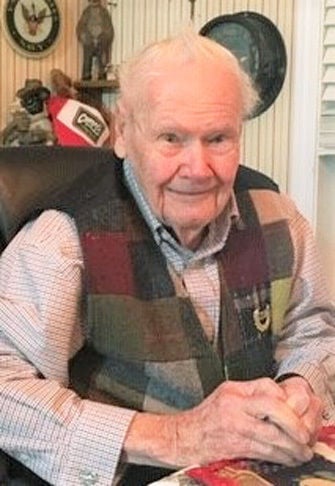 In the life that was just short of 94 years of living, Carl Chance was most proud of his military career. Raised in Ft. Gaines, GA by Lucy and Gus Chance, Carl was the oldest of five children. He decided at age 17 that the US Navy was the life he wanted. At his assignment at the Lakehurst Naval Air Station, he met and married Dorothy LaFleur of New Jersey. They had three children and moved around the country. Carl had been brought into the Atomic Energy Commission by Admiral Rickover. Admiral Rickover later made Carl a supply officer of the first Nuclear Powered Aircraft Carrier, the USS Enterprise. Carl had become an "Atomic Vet" by watching the Atomic Bomb testing at the Bikini Atoll in 1946. Twenty-two years after joining the Navy, Commander Chance retired at the Philadelphia Navy Base to pursue another dream. He wanted to finish his education and he graduated from the Wharton School of the University of Pennsylvania. He saw a need for a Community College in 1966 and helped fund and build Gloucester County Community College in New Jersey. He became Dean of Business there, went on to become a Professor of Business Law and Economics, beloved by his students and peers. In 1989, he retired as Professor Emeritus. He continued to build canoes and travel with his wife. When she passed away in 1995, Carl returned to the South. He married a high school friend, Neva Sanders Smith and his family broadened, adding two more grandchildren to his son's four children. To all the family and friends that were part of Carl's life, during his time in New Jersey, Alabama and Florida- if you hold a place in your heart for Carl, that, in his words, will be his memorial and eternal life.

To plant a tree in memory of Carl Chance as a living tribute, please visit Tribute Store.
+1
+1