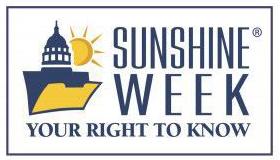 Today marks the beginning of Sunshine Week, a period set aside to champion the importance of open government and the right of the people to have access to the documents and deliberations of government.

It is serendipitous that this year’s open-government week falls in the midst of a global pandemic, when accurate and timely information can literally make the difference between life and death. If there ever was a time that open government is vital to the survival of the republic, it is now.

Despite this, there are those who would rather shut the public out by weakening existing open-government laws, making access to public records more cumbersome and blocking efforts to make government more transparent.

In the face of the global COVID-19 pandemic, Whitmire asked Alabama Secretary of State John Merrill how the March 31 primary runoff would be handled if the pandemic worsened and cases were diagnosed in our state. In a March 10 column, Whitmire wrote that Merrill seemed angry that he’d asked.

““I’m going to tell you why we’re not going to talk about that,” Merrill said. “Because we don’t need for people to be concerned about something that may not ever happen. The story that you’re thinking about writing is not even important.”

In response to Whitmire’s column, Merrill issued a press release suggesting Whitmire was “creating hysteria when there is no need.

“Our plan for changes in the elections process, if necessary, will be revealed at the appropriate time, and not because a reporter believes he or she should prompt that response. … Until we are made aware of an issue in the state of Alabama, elections will continue to operate without interference from the mainstream liberal media,” Merrill wrote.

Several days earlier, Whitmire reported on a committee chaired by state Sen. Jimmy Holley of Elba. The panel was to consider a measure from Sen. Cam Ward that would strengthen the public’s access to the machinations of government with changes to the open-records law.

Holley, as chairman, sets the agenda for the Government Affairs Committee. Whitmire reports that the committee’s time was limited, and that Holley chose to make the first item on the agenda a measure to revise the state law enacted to protect Confederate monuments.

The open-records bill was slotted as item No. 11 — and then Holley called an additional three other bills up out of order, leaving five minutes for proponents of the open-records measure to speak, Whitmire reported.

When elected officials denigrate reporters for asking important questions about government, and stonewall efforts to improve public access to government documents, it’s fair to conclude that there are public officials who would rather not be bothered with the public.

That’s exactly why open-government laws and Sunshine Week are important to democracy.

The real problem with the Alabama Open Meetings Act is that it allows exceptions. The exceptions are specific and rational - but, once a boyd is allowed to go into secret session there is no way to know what business was actually transacted. The problem is made even worse when the OMA prohibits a member of such a body from being the complainant for a violation of the act.

What we need is a system through which a reliable independent observer is required to sit in on each executive session and whose duty woulds be to make public any discussion of business which is not authorized as an exception to the OMA. A transcript of all such meetings should be required and any discussion not exempted from OMA should be published.