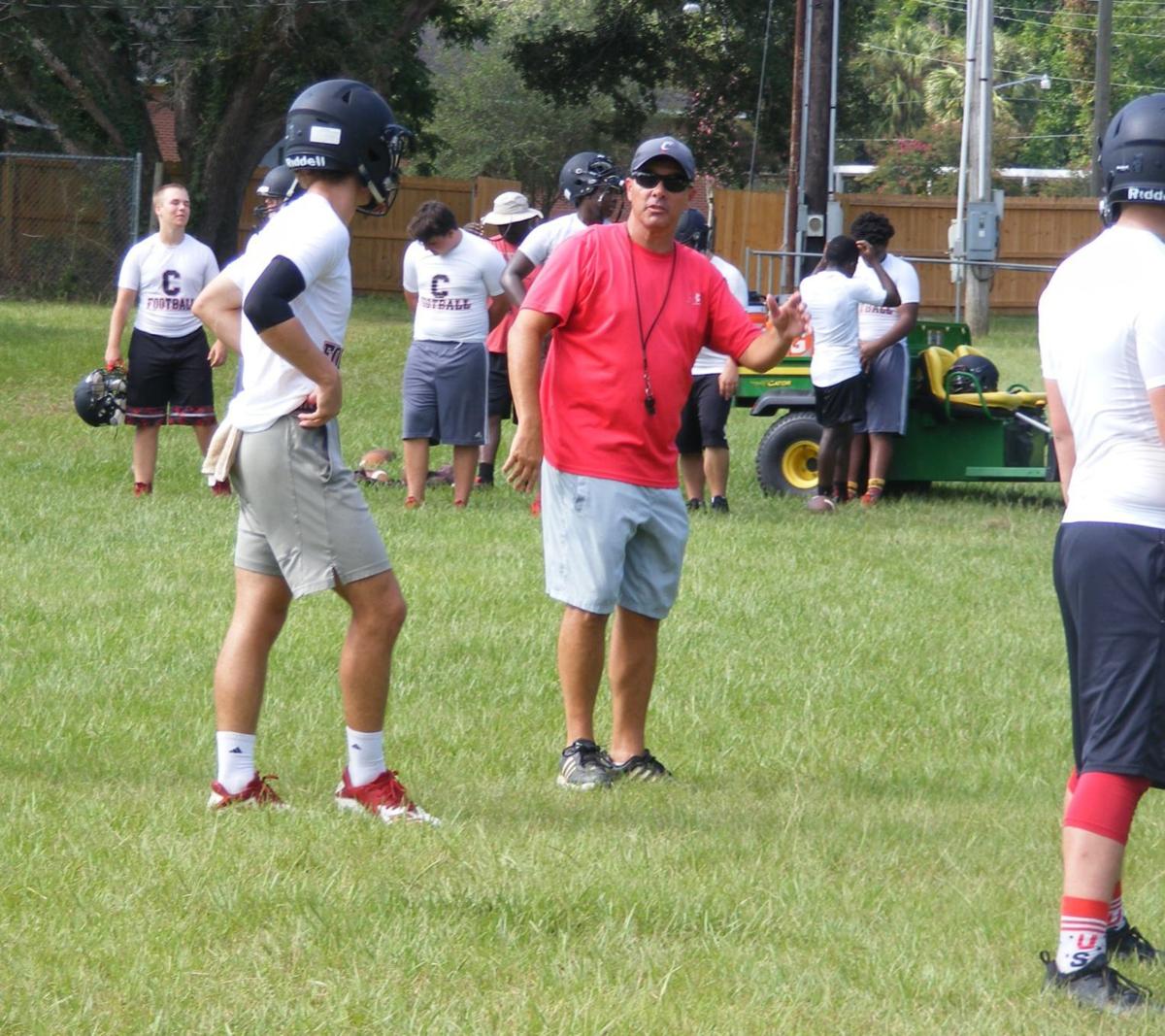 John Gilmore (in red shirt) talks to his quarterback during a Cottonwood preseason practice last August. Gilmore, the head coach of the Bears the last four years, resigned Friday to take an offensive coordinator's job at Smiths Station. 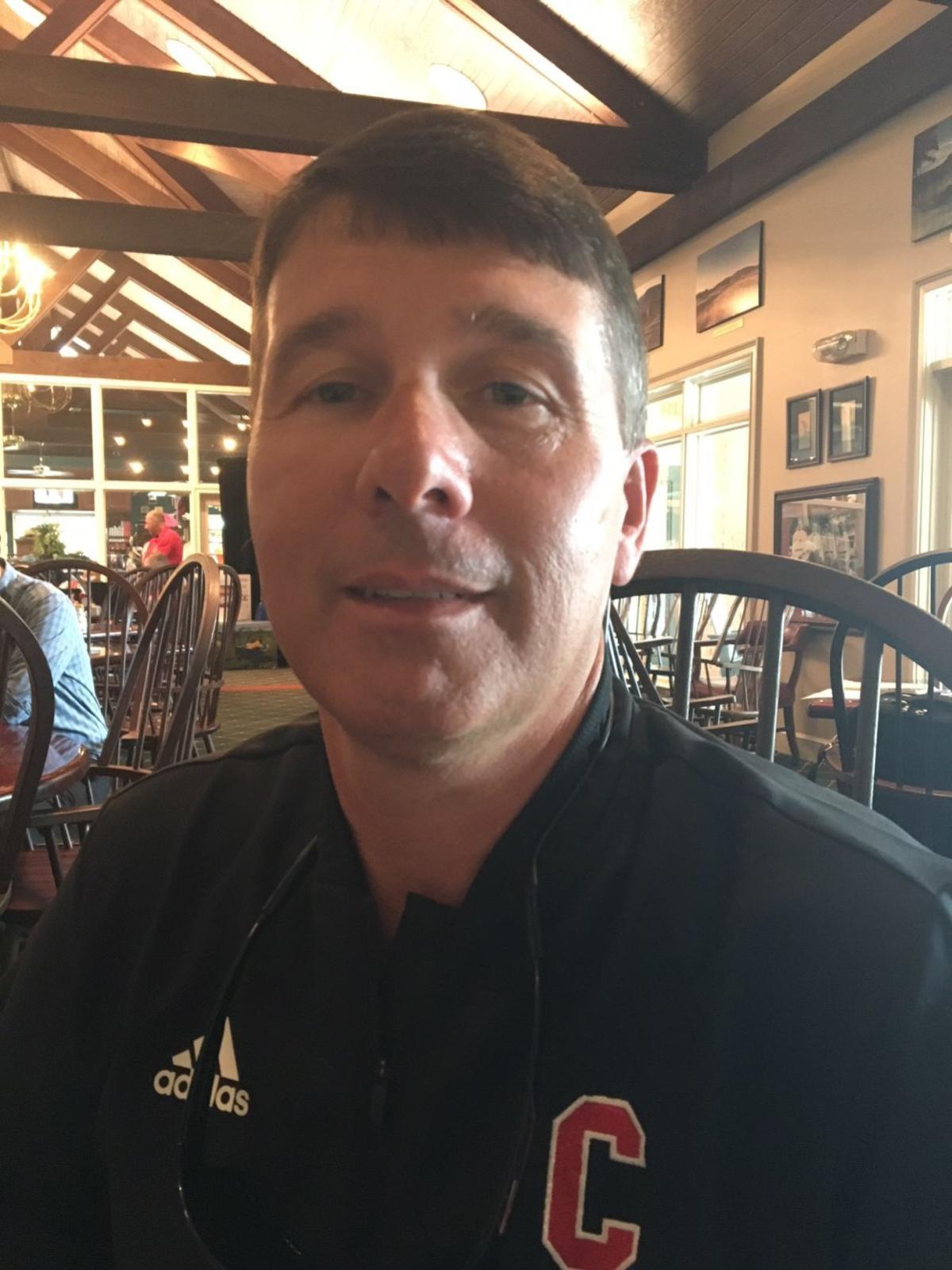 John Gilmore (in red shirt) talks to his quarterback during a Cottonwood preseason practice last August. Gilmore, the head coach of the Bears the last four years, resigned Friday to take an offensive coordinator's job at Smiths Station.

Feeling the opportunity to coach at the highest level of Alabama high school football was too good to pass up, Cottonwood head football coach John Gilmore confirmed he is leaving the program.

Gilmore resigned his position as head football coach/athletic director and driver’s education teacher at the Class 2A school, effective May 28, to become offensive coordinator at Class 7A Smiths Station. He will take over an offense that averaged just 16.4 points a game last season during a 2-8 campaign.

“I decided it was a good move to try my luck at the 7A level,” Gilmore said in a Dothan Eagle interview Friday morning. “I may not get another opportunity because I am 24 years in (the state school system). I decided it was the right time.

“It was just an opportunity I couldn’t turn down. It has nothing to do with Cottonwood. I would have regretted it one day if I didn’t do this — at least trying to be in the highest division in football and trying my luck.”

Gilmore was head coach at Cottonwood the last four years, with the Bears going 13-27. He was an assistant coach for 18 seasons at Eufaula, including the last 10 years as offensive coordinator, including for the Class 5A state runner-up team in 2006 that featured eventual NFL New York Giant player Jerrell Jernigan.

In addition to his role as offensive coordinator, Gilmore will teach 12th grade government and economics at Smiths Station, classes he also taught at Eufaula.

In moving from a 2A to a 7A program, Gilmore will have an opportunity to fully focus on the Panther offense instead of having to deal with all facets of the game like he did as head coach at Cottonwood. It’s one of the advantages of his new job, he says.

“In a 7A school, we will have a two-and-half hour practice just on offense the whole time,” Gilmore said. “Defense will be on its own field, so you will have more time (on offense) and with that much preparation you can put in a lot of things, a lot more complicated schemes than I could here at Cottonwood when they (the players) played three ways and had to learn offense, defense and special teams. Plus there are seven coaches just on offense (at Smiths Station) versus seven coaches for everything we have here.”

Smiths Station head coach Mike Glisson knew of Gilmore’s reputation as Eufaula’s offensive coordinator, having seen him from opposite sidelines through the years. He became even more impressed with Gilmore through interviews leading to his hire.

“John is a guy who’s coached a long time,” Glisson told the Opelika-Auburn News. “He’s been in some really good football programs, and he’s just a tremendous person. I like his philosophy of offense and his attention to detail, and those things are going to be great for our offense. I’m just excited about him coming in and bringing his knowledge, his work ethic and his leadership for our kids. It’s going to be a great thing.”

Gilmore’s preferred offensive style fit in with what Glisson wanted to do with this year’s Panther team.

“The style of offense I run is what he wants to do,” Gilmore said. “They are heavy with tight ends and fullbacks, so we will be more of a pro-set, downhill running team. The main formation will be out of the I with the running part of the pro-style offense and throwing a lot of play-action passes and to the tight end.”

During Gilmore’s tenure at Cottonwood, the Bears football team improved from two wins to three to five in his first three years with the 2018 season hampered by damage to the campus by Hurricane Michael, including the football field. The program fell back down to three wins this past season.

Gilmore felt he had a bigger impact in other areas, though, including in school work among the players. He said overall Bears players did better academically and none had to go to summer school to make up work.

“I am just disappointed that the football didn’t go as well as I would have wanted to go,” Gilmore said. “I thought we were headed that way. We had two wins my first year, three wins then five wins and the hurricane season. Last year, we went back to three. We were successful in a lot of areas except in the win column.”

He felt better about his work as an athletic director at the school, one of his main areas of focus when he was hired in 2016.

At the time, the Bears boys basketball team was coming off a 3-23 season and the girls team a 2-21 record. This past year, the two teams combined for 23 wins.

“My main goal coming in here was I wanted to build every program to be successful,” Gilmore said. “One of my main priorities was building up the basketball as much as I could. To me, it wasn’t all about football even though that was my job as a head football coach.

“I felt if they were all on the upswing, we would better overall. In that aspect, I was very successful. We made some strides. Basketball is getting better. We are putting more emphasis on baseball than we did in the past, making the facilities look better. (We were) putting more pride into the other programs and the people around here were behind it.”

While he is leaving Cottonwood, Gilmore said he will take some good memories from his time at the south Houston County school. His youngest son, Clayton, is graduating from the school next week.

“I will miss it here,” Gilmore said. “The Cottonwood administration has been awesome to me. The kids were awesome. That was the toughest thing — telling them (I’m leaving) because we have become like a family.

“I will miss the friends that we have made around here. My son is a graduate of Cottonwood, so we will always be a Bear at heart.”