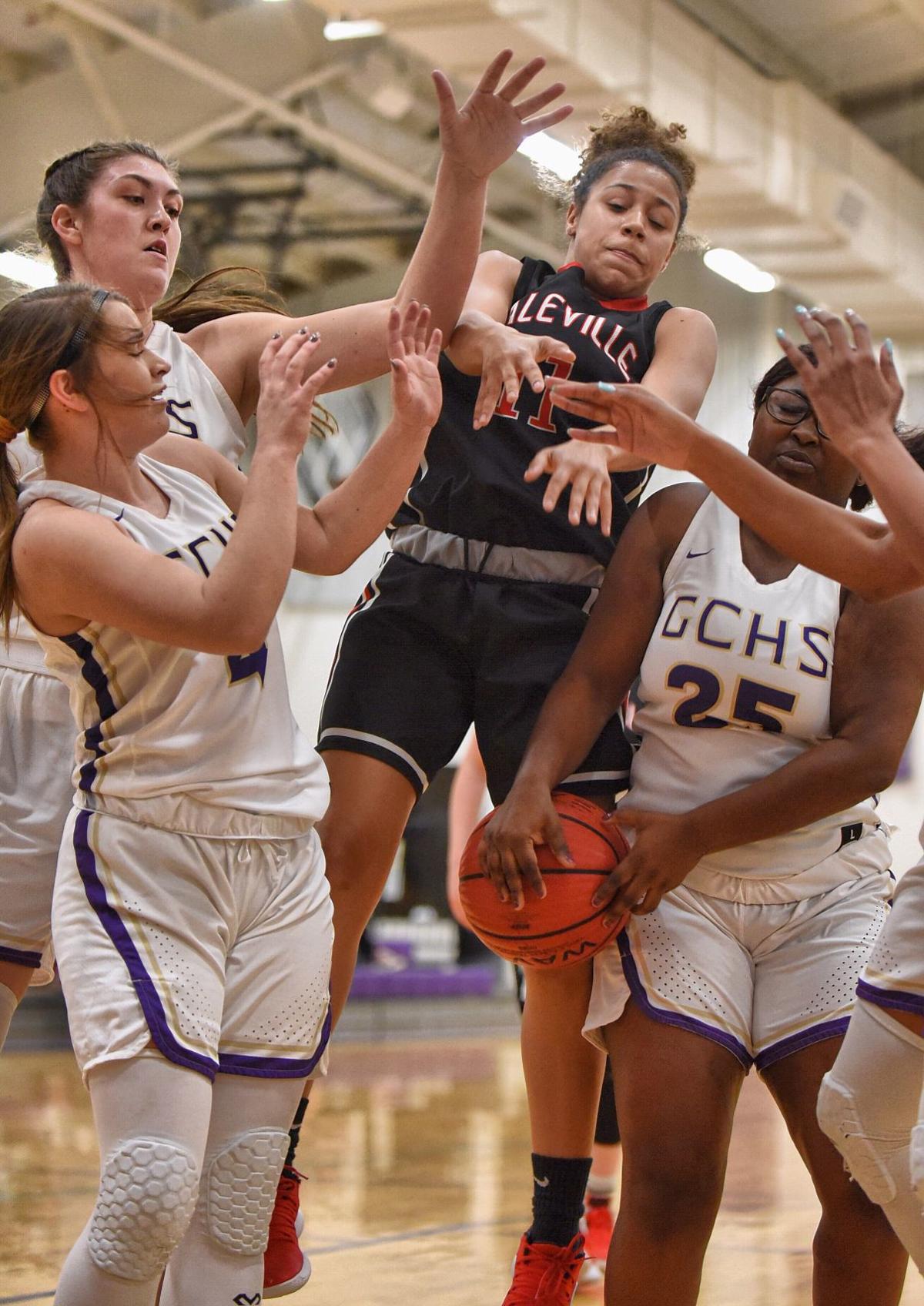 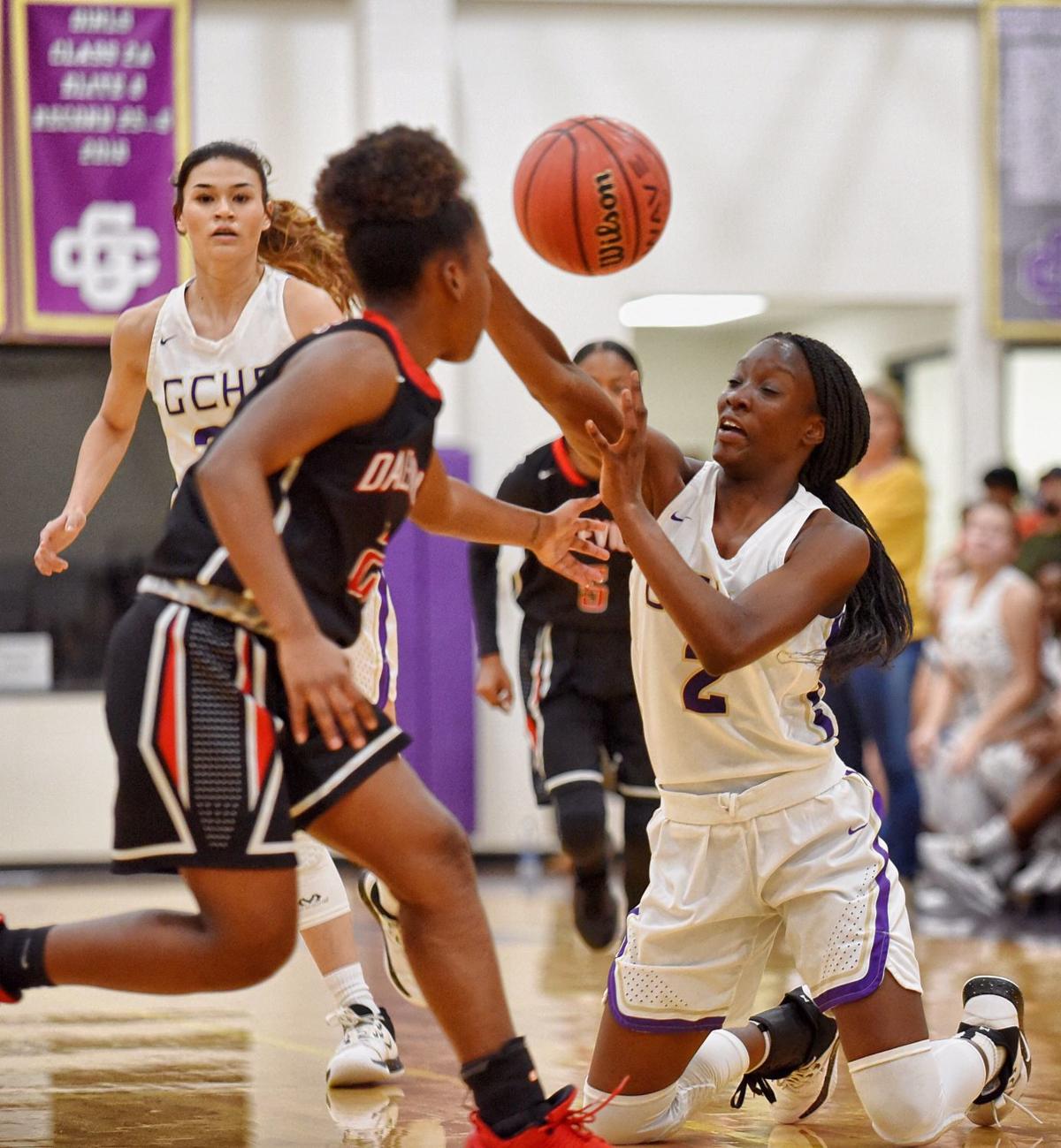 Geneva County’s Jordyn Alston fights for a loose ball during a game against Daleville at Geneva County on Tuesday night.

Geneva County’s Jordyn Alston fights for a loose ball during a game against Daleville at Geneva County on Tuesday night.

Forcing 26 turnovers, the Class 2A state third-ranked Lady Dawgs earned 38 fastbreak points in a 71-36 win over the Warhawks in a 2A, Area 3 game.

The outcome pushed Geneva County to 14-4 overall and to 3-0 in the area following the first rotation of area games.

“I think our team as a whole continues to get better and better,” Geneva County head coach Karie Striplin said. “We are learning our roles and from game to game we are seeing what player can help us out in certain positions.

“We didn’t know what to expect from them (Daleville) since we hadn’t played (this year), but it looks like Daleville and Cottonwood are evenly matched and they have the same mentality — they are tough, they hustle and they really put our girls to the test.

“I am happy with our performance of sharing the ball, getting a lot of good rebounds and looking up the floor well (for fastbreak). We are just pressuring where people can’t handle the pressure so we are getting a lot of steals.”

The Lady Dawgs were particularly aggressive in the first quarter with the press and the fastbreak. They earned four steals and six fastbreak points in the first three minutes to build a quick 10-4 lead.

Davis, Striplin and Boutwell added fastbreak layups to increase the margin to 10-4.

After a steal and fastreak layup by Daleville’s Erika Herring cut it to 10-6, Geneva County ripped off 13 straight points, almost all of the points coming off transition, to grab a commanding 23-6 lead with 2:20 to go in the opening quarter.

Striplin had a layup and Alston two fastbreak layups before a Striplin steal lead to a fastbreak 3-pointer by Alston. Striplin added a bank shot in the halfcourt set after an Alston offensive rebound and Boutwell scored on a fastbreak layup to finish the run.

“Getting down the floor and running with space is what we did well today,” the head coach said. “We just didn’t get down the floor. We knew the spacing would create somebody else to be open or make it easy on the shot.”

Daleville’s Joye Anderson hit 1-of-2 free throws to stop Geneva County’s run, but the Lady Dawgs finished the quarter up 25-7. They finished the opening period 11-of-18 from the floor with 10 of the baskets within 8 feet of the hoop, most of them layups.

It was more of the same in the second quarter as Geneva County continued to score layups, mostly in transition. The Lady Dawgs opened the period on a 12-0 run to increase the margin to 37-7.

Striplin had six of the points, Abby Land hit a 3-pointer in the left corner, Alston scored on a fastbreak layup and Boutwell added a free throw.

Geneva County led 49-17 at halftime, hitting 10 of its first 13 shots with seven of the made baskets coming on layups before missing the final three attempts.

The margin didn’t dip below 30 in the second half as Geneva County cruised in for the win.

Striplin and Alston paced the winning Bulldogs with 21 and 19 points, respectively. Boutwell added 11 points and Davis chipped in eight for Geneva County, which finished 31-of-65 shooting in the game (47.7 percent).

Karie Striplin said she was also pleased with the play of bench players Anzu Davis and Jayden Williams, both freshmen, and Da’Shawn Lee, a junior.

“We have three girls coming off the bench now that are helping us run fast pace over and over,” Striplin said. “We are continuing to keep a fast-paced game from start to finish because of our bench. They are not turning the ball over, they are rebounding well and playing good defense.

“Those three players are a good two, three and four (positions) that we can throw in there and mix up our rotation. They are very interchangeable.”

Daleville, which dropped to 6-7 and 1-2, was led Janee Clements with 11 points and Herring with 10 points.

J’Quan Broxson added 16 points and 13 rebounds and Colby Fuller had 11 points and 10 rebounds.

Daleville (9-8, 2-1) was led by Tomar Hobdy with 12 points and Sincere McKenzie with seven.

Corey Holloway had 18 points and Romeo McKenzie 12 for Daleville.