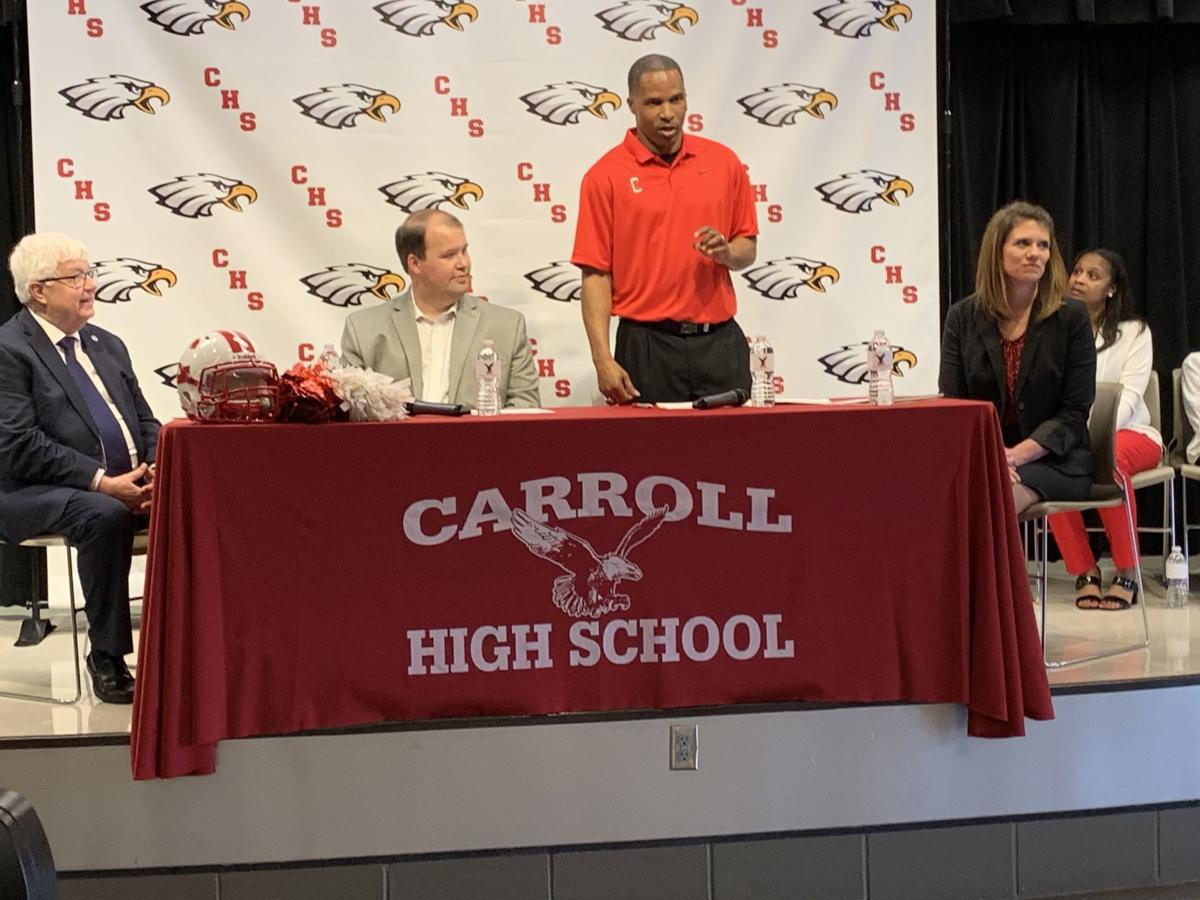 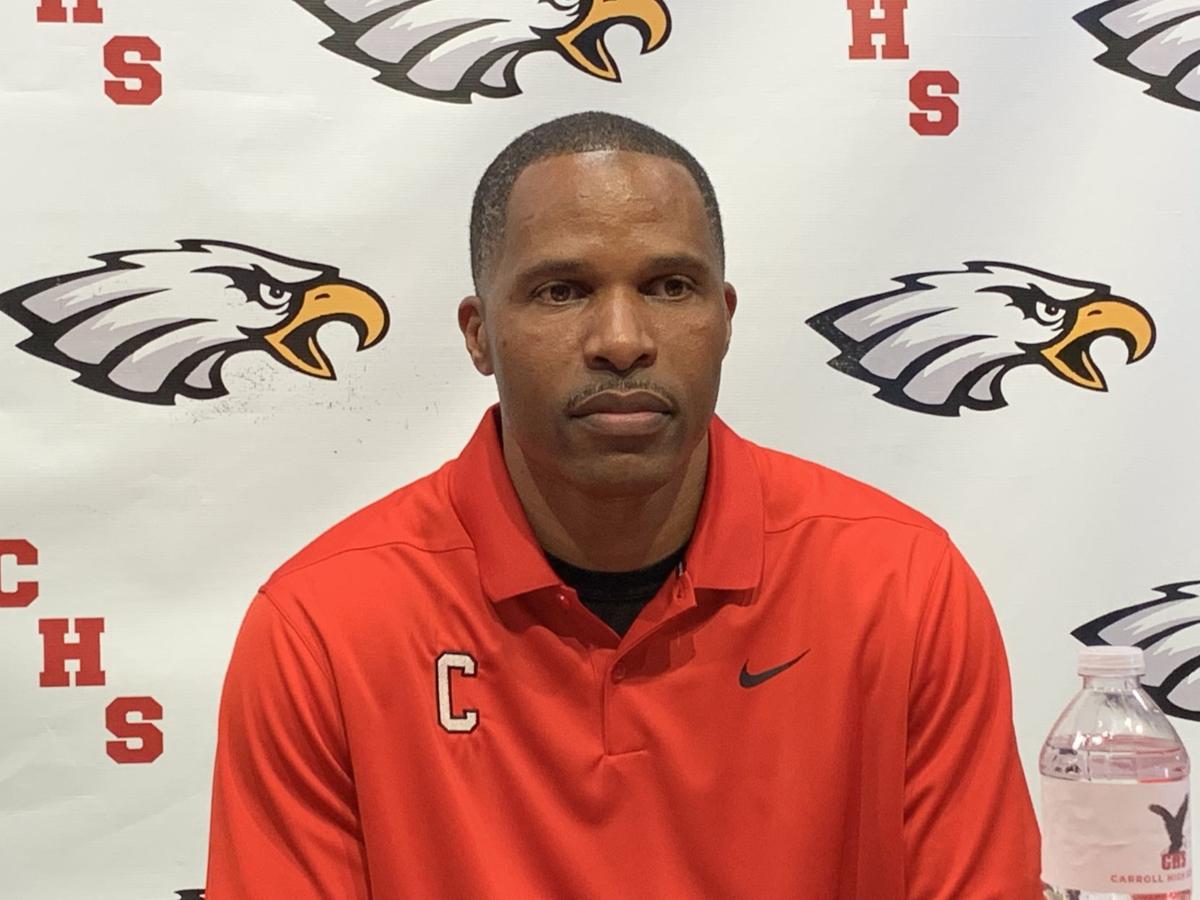 From Carrollton to Carroll.

Patrick Plott, a native of Carrollton in west Alabama and a nine-year head coaching veteran with a state title on his resume, has taken the latest step in his coaching path — and it comes at Carroll High School as the new head football coach of the Eagles.

Plott, who has been an assistant coach at Auburn High School the last six years, including the role as defensive coordinator, was hired by the Ozark City School Board on Thursday night. He was introduced to much fanfare Wednesday afternoon in the Carroll High Choral Room with the school band playing and with players and Carroll supporters in attendance.

He replaces Roger McDonald, who resigned in early January.

“I am excited about the opportunity to take over the Carroll football program,” Plott said in front of the crowd. “I truly believe we can develop a system of winning here at Carroll on and off the field. Our mission is to train our players to desire excellence in all of their actions.”

Plott quickly said for him, it “starts in the classroom,” drawing roars of approval from those in attendance.

“Academics are very important,” Plott said before quickly raising his voice for emphasis to say, “It will, it will be a priority.”

If necessary, he said he would come to the classrooms to assure players are doing the right things.

On the football field, Plott, who has a career record of 86-27 that includes a state title at Pickens County in 2013, said he had one major objective for his new program.

“My plan is to work together to make this one of the best football programs in the state,” Plott said.

The new coach said qualities toward that goal would be defined by three things — discipline on and off the field, hard work in the classroom and on the field and unity.

“We have to work together,” Plott said. “I can’t do it by myself. It will take these guys (band) and you guys (players). It will take everybody.”

Plott began his coaching career as an assistant in his hometown of Carrollton and the Carroll position will be his 10{sup}th{/sup} different job in the high school ranks, five as a previous head coach.

He guided Aliceville to a 26-9 record from 2005-07 with all three teams reaching the playoffs, including two that won opening-round state playoff games. He went to Pickens County in 2008, going 11-2 with a state quarterfinal appearance, before taking a head job at Bullock County in 2009. The Hornets went 2-8 in his only season there before he became an assistant coach at Demopolis.

One year later, he returned Pickens County as the head coach and had a highly-successful 37-5 three-year tenure capped by a Class 1A state title and a 15-0 record in 2013 with the Tornadoes.

While at Pickens County, he also led the Tornadoes to a state title in basketball in 2012.

He took over as Greenville’s head football coach in 2014, leading the Class 5A Tigers to a 10-3 record and the state quarterfinals before moving to Auburn High School as an assistant.

On the field, Plott said his philosophy revolves around being “physical” and “fast.”

“I am all about being physical,” Plott said. “I am firm believer that the first contact from stance and start usually wins the battle, so that will be our goal every day — have a great stance, first one of out of your stance and win your battle.”

Plott also explained offensively he likes to be 50-50 between the pass and run, drawing applause from the spectators at the press conference. He wants the defense to play fast and physical.

“Offensively, we will operate from a spread system. I know when people hear spread they think you are going to throw the ball all over the field, but that is not the case,” Plott said. “We will establish the run, but we want to make defenses defend the whole field, so we want to try and be 50-50.

He also promises to be aggressive, especially on special teams.

“We will take chances on special teams,” Plott said. “We will not be afraid to go after a punt and block it or be afraid to fake a punt. We will be aggressive.”

Barton talked about Plott’s philosophy of having a 50-50 run-pass offense plus an aggressive, physical defense plus his resume as a proven winner all “stood out,” but mostly his desire to “turn young boys into respectful young men through education and football,” was the biggest.

“It all started with coach Plott’s character and the discipline he talked about within the school and the team,” Barton said. “(From) academics, character, discipline and changing those young men into becoming better fathers, sons, husbands, brothers and whatever it may be, that outshined anything that he talked about football.”

Riley Jordan, who will be a junior center for the football team next year, said he was impressed with what he heard from his new coach.

“I really liked how he was going to hold us accountable in the classrooms and will do whatever it takes to make sure that we perform to the best of our abilities,” Jordan said.

“I like to hear that we are going to have a change in our offensive style, just not doing the same play every play, and that he will bring some dynamic plays in the playbook.”

Plott began his tenure at the school Friday and has tentative plans to start spring practice April 27 and a possible spring game on May 7, though the current school closing due to coronavirus that was mandated later in the day by the state governor and Alabama Department of Education could change that.