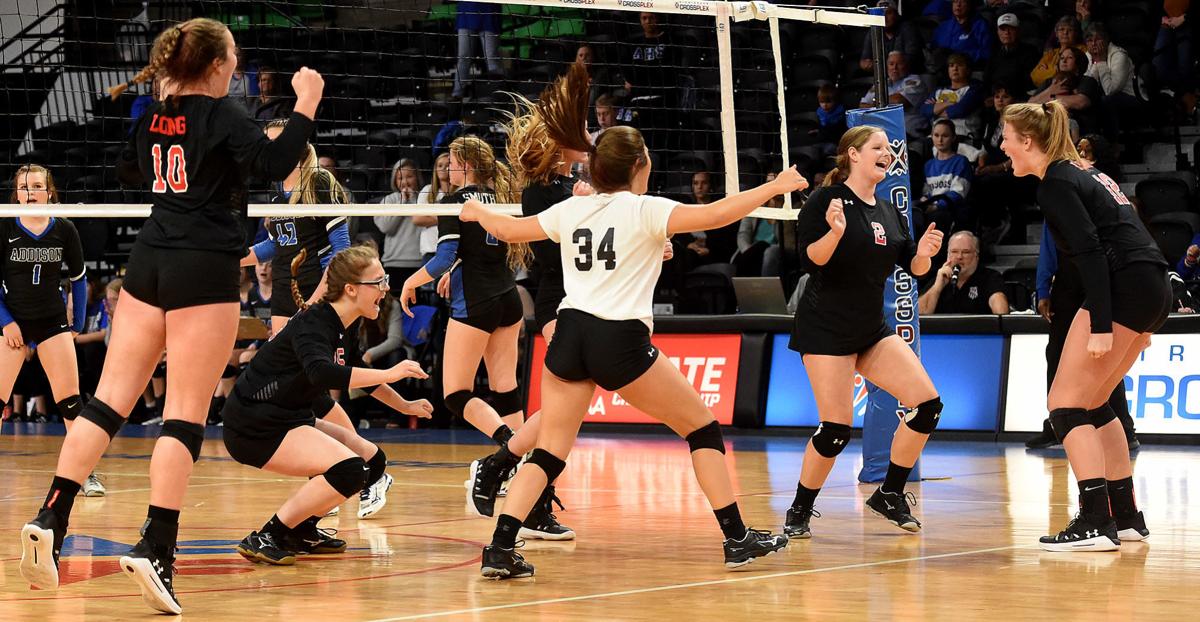 G.W. Long players celebrate a set victory over Addison during the AHSAA Class 2A volleyball state championship at the Bill Harris Arena in Birmingham, Ala., Thursday, Oct. 31, 2019. (Mark Almond | preps@al.com­) 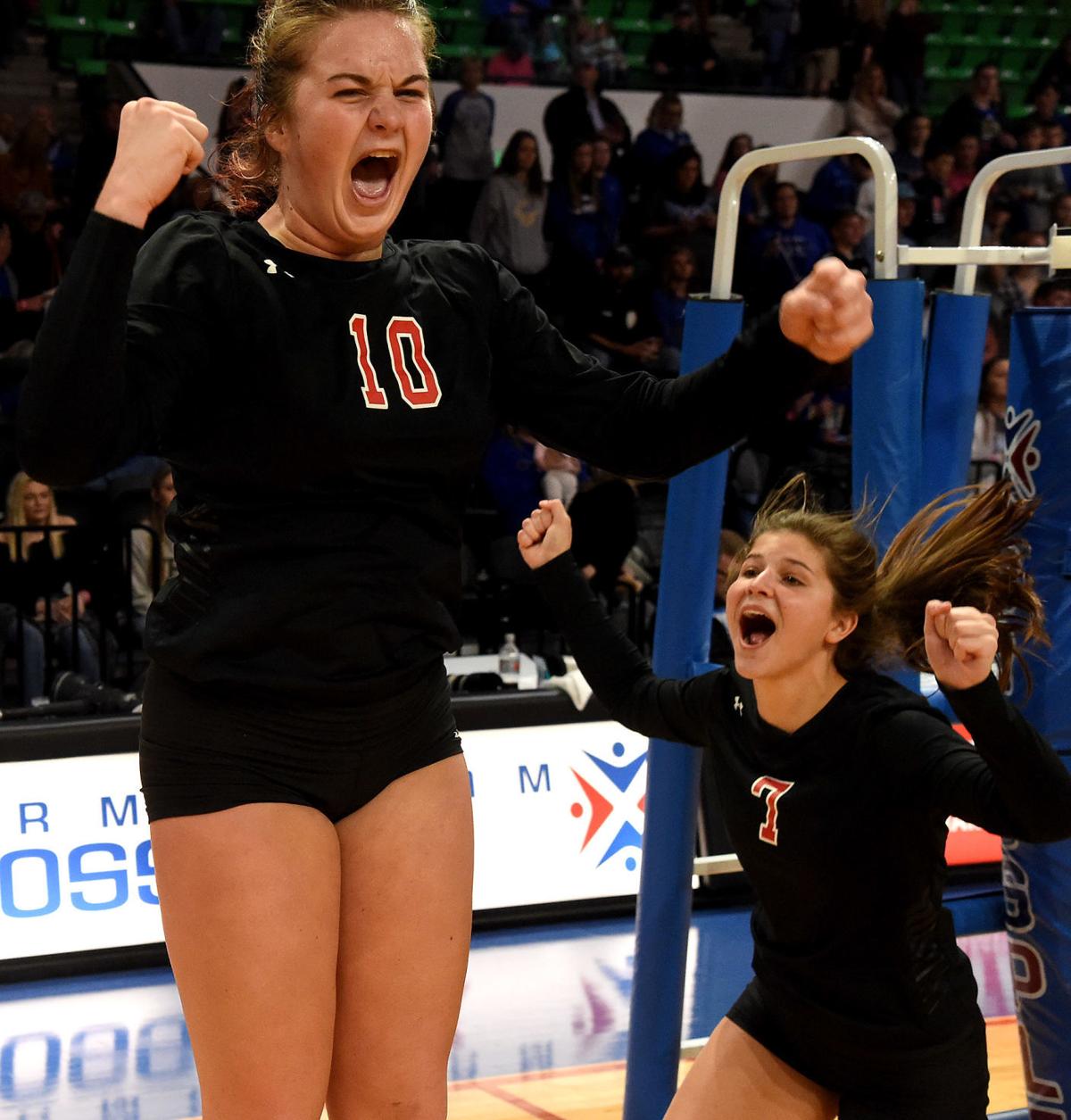 G.W. Long's Emma Claire Long (10) and Kyndall Wallace celebrate the victory over Addison for the AHSAA Class 2A volleyball state championship at the Bill Harris Arena in Birmingham on Thursday. (Mark Almond | preps@al.com­) 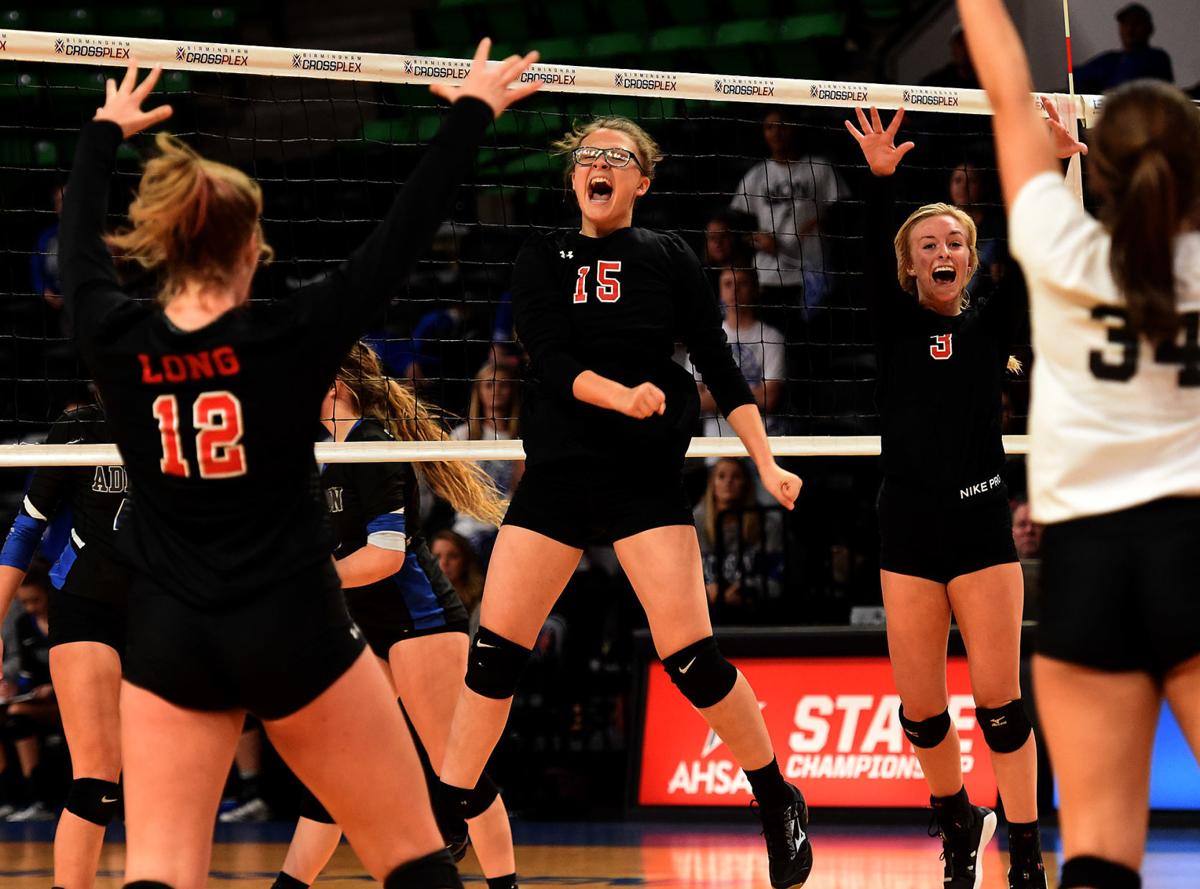 G.W. Long's Allie Whitehead (15) and teammates celebrate a point against Addison during the AHSAA Class 2A volleyball state championship at the Bill Harris Arena in Birmingham on Thursday. (Mark Almond | preps@al.com­)

G.W. Long players celebrate a set victory over Addison during the AHSAA Class 2A volleyball state championship at the Bill Harris Arena in Birmingham, Ala., Thursday, Oct. 31, 2019. (Mark Almond | preps@al.com­)

G.W. Long's Emma Claire Long (10) and Kyndall Wallace celebrate the victory over Addison for the AHSAA Class 2A volleyball state championship at the Bill Harris Arena in Birmingham on Thursday. (Mark Almond | preps@al.com­)

G.W. Long's Allie Whitehead (15) and teammates celebrate a point against Addison during the AHSAA Class 2A volleyball state championship at the Bill Harris Arena in Birmingham on Thursday. (Mark Almond | preps@al.com­)

And the pieces are in place for more potential titles.

Shaking off a horrible start and a first-set loss to win three straight sets, G.W. Long’s volleyball team earned the Class 2A AHSAA state title at Bill Harris Arena with an 18-25, 25-21, 25-22, 25-15 win over the Addison Bulldogs.

The title is the first in volleyball for G.W. Long and matched titles won the last two springs by the softball team. The basketball team, which returns most of its players from last year’s state semifinal team, could be a threat to win state this winter and the newly-crowned volleyball champs return all but one player for next year.

“It feels really great as it is my senior year,” said Rebel outside hitter Mary Beth Long, the team’s lone senior. “This is what we have been working for all throughout my high school career. This is the team to do it. If we were going to do it anytime, this was the team that would make this run.”

Long, who was part of the softball titles, added of the volleyball crown, “It is the greatest feeling ever.”

G.W. Long finished the season with a 47-6 record, winning its last 12 matches since losing Oct. 15 to Class 3A state semifinalist Houston Academy.

“I would like to thank the Lord for giving us the opportunity and showing favor on us to let us get here,” Rebel head coach Craig Long said. “We have been working real hard. These girls are hard workers and easy to coach. It is absolute a joy to coach them. Addison has a great team and we had to fight to beat them.

“We talk about the state championship all year. We felt we had a team to win it. The girls just kept working. We had some ups and downs. We are 47-6, but there were some times where we won ugly, but we kept pushing and working to be perfect.

“During the state tournament, we all came together. The girls just played unbelievable. The defense was awesome and the effort was unbelievable.”

Thursday’s outcome helped Long avenge a state semifinal loss from last year to Addison, which entered Thursday with six straight titles while competing in Class 1A and 2A (three in each).

“My goal was to be in this room and get back at them for beating us bad last year,” Emma Claire Long said.

Mary Beth Long, who is expected to sign with AUM next month, earned tournament MVP honors. She delivered a match-high 29 kills and 20 digs and added two aces and two assists in Thursday’s final and finished the three state tournament matches with 90 kills and 57 digs.

Emma Claire Long and Makenna Long were named to the all-tournament team.

Addison, which finished the season 44-14, was led by 6-foot-1 middle hitter Savannah Manley with 19 kills and by Callie Crider with 14 kills and 10 digs. Gracie Manley delivered 32 assists. Addisyn Smothers had 11 kills and 10 digs, while Macey Butler had 14 digs and 11 assists.

G.W. Long was sparked by defense as the Rebels earned 83 digs and combined on 10 block assists. “We lost in the semifinals last year to Addison and I thought we lost because our defense was not strong enough,” Craig Long said. “This summer we put in a perimeter defense and we worked on defense more than any other thing.

“Defense wins in anything — football, basketball and baseball — and the same is true in volleyball. Today, you saw our team play great defense. The teams Addison has been playing, those balls would be down for kills, but our kids got in position to dig those balls.”

The teams were tied at 3-3 in the first set when Addison scored 12 straight points to take a 15-3 advantage. Long, though, regrouped and played competitive the rest of the set, though it lost it 25-18.

“We had to fight off the nerves in the first set,” Craig Long said. “We had some nerves and it showed. They took it to us pretty good that first set, but after that we got into the swing of things and took over the match.”

Right before the final point of that Bulldog string, G.W. Long called timeout.

“They had scored 12 straight points and eight of them were off our mistakes,” Craig Long said. “I said, ‘Girls we can’t help a team like this. This is a great team and we have to stop giving them points. We have to fight back and make them earn every point.’”

Though the Rebels lost the set, they finished it on a 15-10 run that the Rebel head coach felt was a confidence booster.

“After we came up short, I told them, ‘You see we can play with them. Now we have to go out and beat them,’” Craig Long said.

G.W. Long led 13-7 when the Bulldogs surged and cut the margin to 14-13, but the Rebels regrouped with three straight points off three Addison hitting errors and maintained the lead the remainder of the set to win 25-21. A Henning kill off a Hughes pass sealed the set.

The third set was mostly a tight one and it turned G.W. Long’s way late. Tied at 18, Mary Beth Long went out of bounds for a third hit near the umpire chair to save it with an over the shoulder hit that went over the side of the net into Addison’s side.

On the same volley, Hughes made a diving dig to prevent the point and seconds later, Henning earned a block, giving the Rebels the point.

“It was a long volley,” Craig Long said. “I felt we need to win the long volleys because it demoralizes teams (to lose it). That was a huge point.”

Including that point, the Rebels scored six of seven points to go up 24-19 and to set point. After a tip kill and a block by Addison’s Manley, the Bulldogs served long out of bounds, giving the Rebels the set 25-22.

Addison had a 5-4 lead in the third set, but the Rebels, behind a kill each from Henning and Emma Claire Long, eased out to a 9-5 lead.

The Rebels wouldn’t lose the lead and finished it in style with four straight points, the last when Makenna Long faked a set to the middle and dumped a two-handed shot that went into the floor behind the Bulldog front line, setting off a wild Long celebration on the court.

Many of the same Rebel players also members of the basketball and softball teams.

Already, the talk moved to keeping the recent string of girls programs’ state titles going in basketball, which begins practice this week.

“I am already ready to get to practice,” said Makenna Long, a point guard on the basketball team.