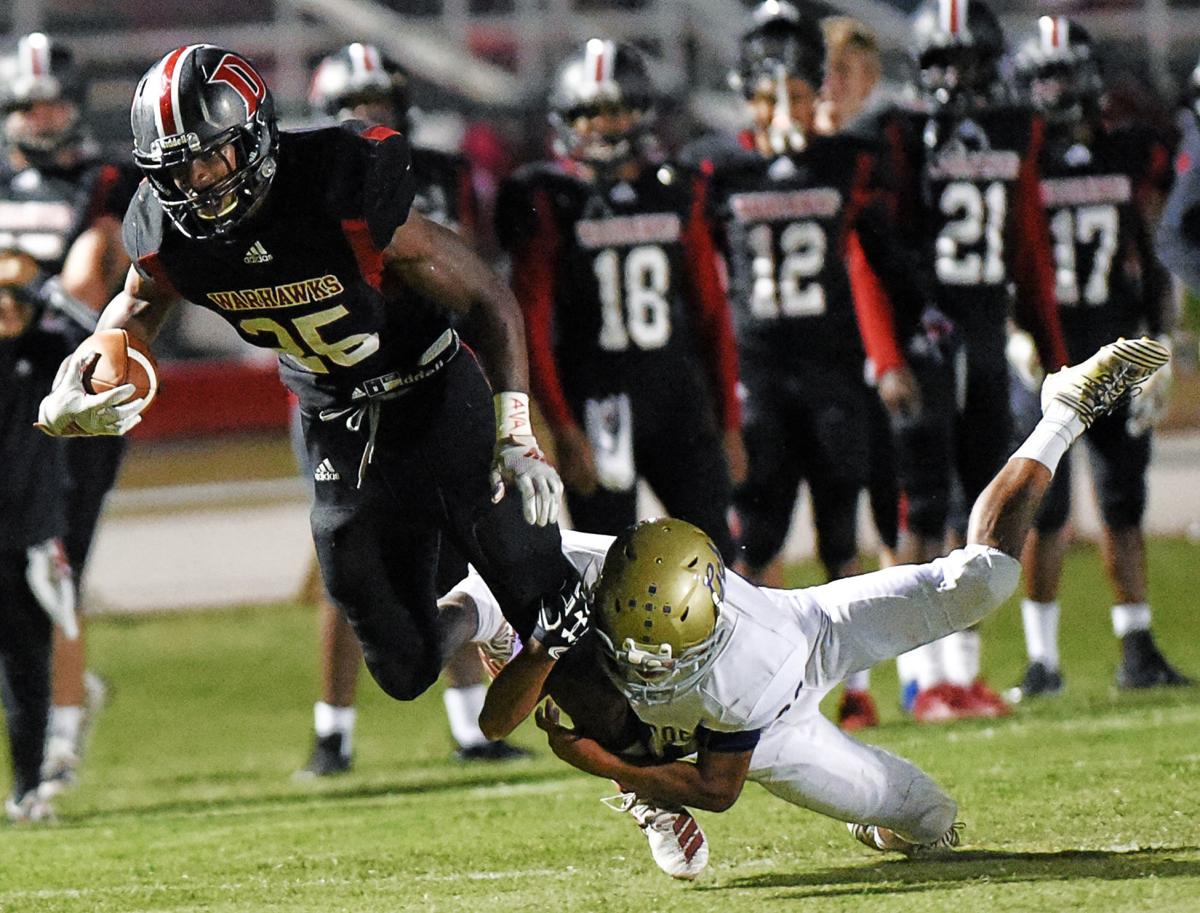 Daleville running back Jalen White runs for a gain during a game agasint Geneva County on Friday night in Daleville. 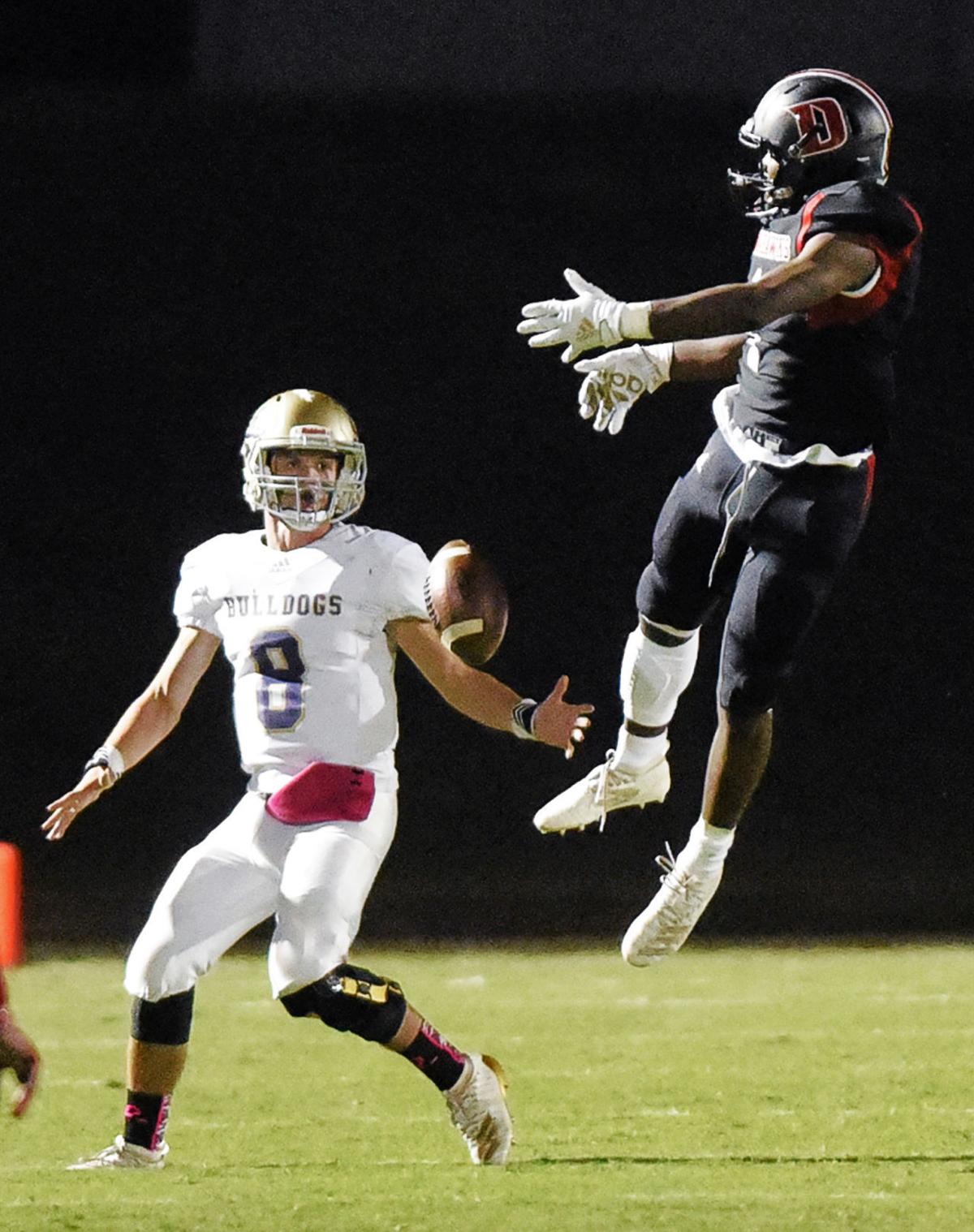 Daleville running back Jalen White runs for a gain during a game agasint Geneva County on Friday night in Daleville.

DALEVILLE — Prolific Daleville running back Jalen White smashed his career highs with 465 yards and seven touchdowns to lead the Warhawks into the state playoffs with a wild 70-51 victory over Geneva County on Friday night.

White, who starred on his Senior Night, and Geneva County sophomore running back Emmanuel Henderson of Geneva County kept doing what they’ve done all season. The difference early, however, was the emergence of a surprising aerial attack by Warhawks quarterback Robert Dees, who threw two touchdown passes to Melvin Matthews in the first half.

But when it was “winning time,” White left his mark.

Henderson nearly kept pace. The sophomore rushed for touchdowns of 38 and 35 yards in the first quarter. As Daleville pulled away in the second half, he showed why the Warhawks kept squibbing kickoffs. An up-man fielded a grounder, fired it backwards about 20 yards to Henderson, who then raced about 70 yards to the end zone for his state-record seventh kickoff return for a touchdown.

Daleville needed just four plays after the opening kickoff to cover 60 yards and get on the scoreboard first. Sincere McKenzie opened with a counter after a fake to White and ran for 29 yards on the first play from scrimmage to the Bulldogs’ 31. On the second play White ran for 23 yards on a pitch to the left side. Two plays later, he scored on an 11-yard touchdown run. His two-point conversion run put the Warhawks up 8-0 less than two minutes into the game.

After an exchange of punts, Geneva County needed just one play to cut the lead. Henderson lined up split left, came in motion and took a handoff from Cole Saunders around right end. He crossed the goal line 38 yards later. Jeferson Ayala made it 8-7 with the extra point at the 3:58 mark of the first.

As everyone waited for White’s response, Dees faked a handoff to him and found Matthews open down the middle of the field. The pass was underthrown, but Matthews came back for the ball, made a nice move and headed for the right sideline. He shook off a tackle and raced to the end zone on 54-yard touchdown play. White’s two-point run gave the Warhawks a 16-7 lead at the 2:04 mark.

Henderson responded with an identical speed sweep around right end and a spring to the end zone on a 35-yard TD run. The extra point cut Daleville’s lead to 16-14 with 56 seconds left in the rapid-paced opening quarter.

White carried six times on the Warhawks’ next possession to set up second-and-7 at the Geneva County 18. Another play-action pass was wide open and Dees hit Matthews for 18 yards and the score. The two-point play failed, but Daleville led 22-14.

The Warhawks forced a three-and-out and took over on their own 22. On first down, White took a pitch around right end and pressed the accelerator on a 78-yard touchdown run. McKenzie scored on a counter for the two-point play and it was 30-14 with 6:47 left in the first half.

Three consecutive kickoffs sailed out of bounds — a measure of respect to Henderson’s kick return ability. The Bulldogs mounted their best drive of the game and went 68 yards in 14 plays. The half ended as Will Birdsong took a direct snap and scored on a sneak from inside the 1 on fourth down. Henderson added the two-point play to pull Geneva County within 30-22 at halftime.

As wild as it was, the first half was but a prelude to the scorefest in the second half.

Geneva County was stopped on downs after a promising drive ended at the Daleville 10. The Warhawks drove it 90 yards, the last 35 on a White run around left end for the TD and a 38-22 lead with 2:03 left in the third quarter.

That set up a 61-point fourth quarter. Geneva County quarterback Cole Saunders threw an 8-yard TD pass to Jackson Stewart with 10:41 remaining. The two-point play cut it to 38-30.

Henderson came back with his long kickoff run for a touchdown to make it 54-43.