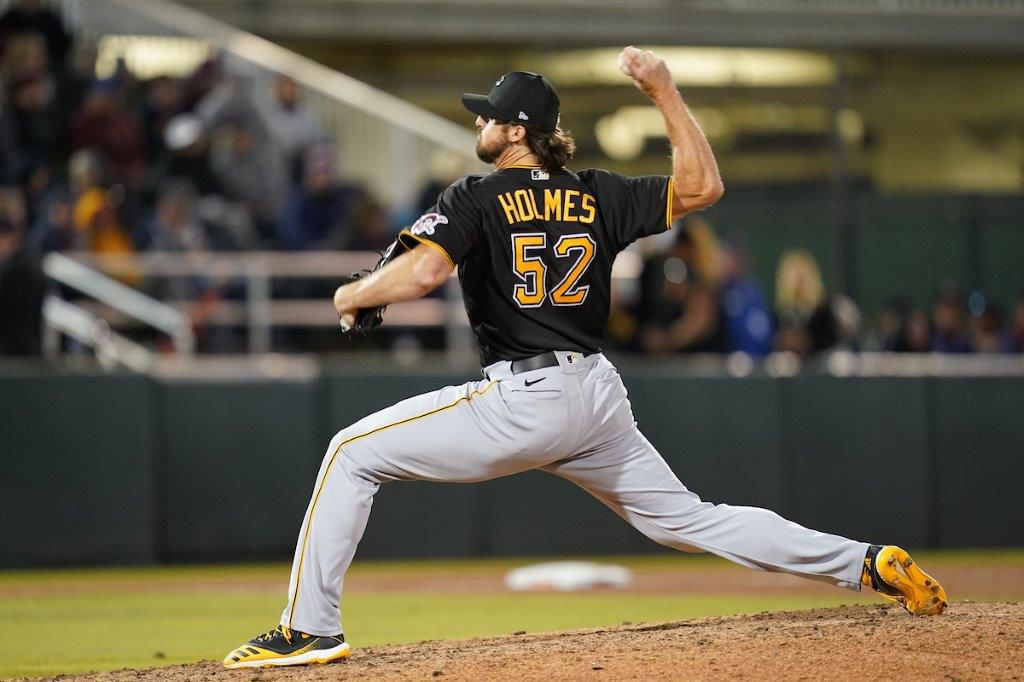 Slocomb native Clay Holmes fires a pitch during a Feb. 29 spring training game against the Minnesota Twins in Fort Myers, Fla. Holmes is recovering from an fractured fibula and expects to be ready for whenever the Major League Baseball season begins. 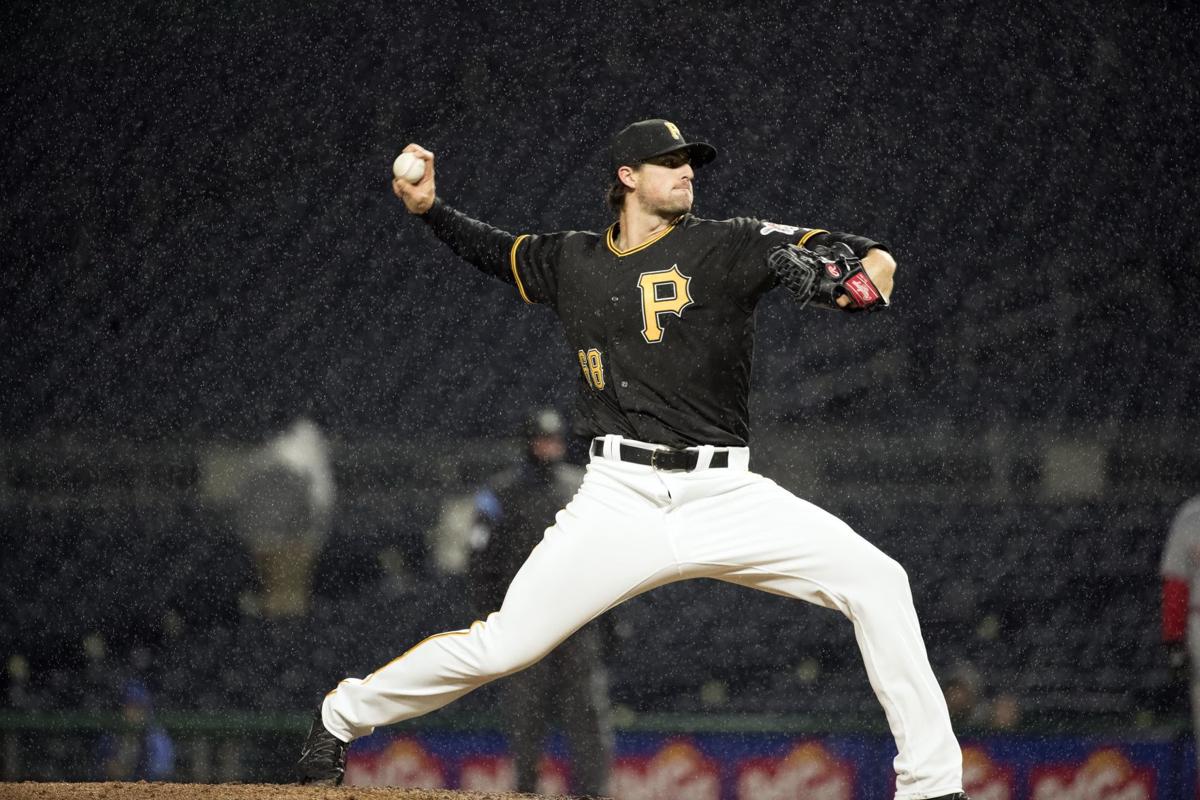 Slocomb native Clay Holmes, shown in his major league debut on April 6, 2017, is recovering from a fractured fibula from Feb. 29. Holmes expects to be completely healthy whenever the MLB season starts after the coronavirus subsides.

Slocomb native Clay Holmes fires a pitch during a Feb. 29 spring training game against the Minnesota Twins in Fort Myers, Fla. Holmes is recovering from an fractured fibula and expects to be ready for whenever the Major League Baseball season begins.

Slocomb native Clay Holmes, shown in his major league debut on April 6, 2017, is recovering from a fractured fibula from Feb. 29. Holmes expects to be completely healthy whenever the MLB season starts after the coronavirus subsides.

While the delay of the Major League Baseball season because of the coronavirus continues to make history, it has provided Slocomb native and Pittsburgh Pirates pitcher Clay Holmes the opportunity to start the season with the big league club.

A 2011 Slocomb graduate who played a full season with the Pirates last year after several call-ups and demotions in 2018, Holmes would have missed this past week’s season opener because of a fractured fibula in his right foot suffered when a hard grounder hit the area during a spring training game on Feb. 29

With the start of the season in limbo until May, June or later, Holmes should be finished with his rehab when the season resumes, if it does. He was 12 days into his rehab for the injury when MLB halted all activity on March 12 because of COVID-19 concerns.

“There is definitely a silver lining in all this for me,” Holmes said of the delay to the season opening. “I got a two-week head start on the downtime and it gives me some direction and some time. With all this going on, it has given me time to not rush things and I will be healthy whenever we start back.”

While most major league baseball players have returned home, Holmes opted to stay at the Pirates’ spring training facility in Bradenton, Fla., to do his rehab. His wife, Ashlyn, is with him and a couple of other Pirate players also stayed for rehab work. He admitted he likely would have been back home in Slocomb if not for the rehab.

Since the injury, Holmes has been wearing a boot over the right ankle, which is on the push-off foot for the right-hander in his delivery. He still has been able to get some pitching work in, though.

“I am able to keep my arm in shape with some throwing on my knees and throwing some with the boot on in the last week,” Holmes said. “I’m still in shape.”

If he receives a good report of a MRI next week, he could ditch the boot completely.

The rehab sessions provide a sense of working for Holmes, who just turned 27 last week and is without baseball for one of the few times in his life because of the MLB mandated shutdown.

“It’s definitely different,” Holmes said. “I was talking to my wife the other day, wondering if this is what life after baseball feels like. It is almost an early glimpse into that.

“It is unique in that this has been the first time in a long time where I haven’t played baseball at this time of year. It definitely takes some adjusting to get used to.”

Holmes said the timing of the shutdown by Major League Baseball was justified. It came less than 24 hours after two basketball players in the NBA tested positive for the COVID-19 virus the night before.

“You began sensing the magnitude of it with basketball shutting down and when players started testing positive,” Holmes said. “That is the last thing you want is (baseball) players to start testing positive and start spreading it. They definitely made the right decision to make the early call to shut things down. MLB, the Players Association and players have really handled it well so far.”

Holmes called the moment of the shutdown “surreal” and admits it has been a “weird” time since with no baseball.

“Things have been a little weird, certainly not ideal for the players and the fans being that it is baseball season and there is no baseball.

“It definitely is weird not playing baseball or having it around, but we are doing our part (to slow the spread of the virus) and we are encouraging others around us to do their part so we can get things started as soon as possible.”

In an interesting twist, Holmes and his wife are in a condo these days right off Bradenton at Anna Maria Island where a beach of all names — Holmes Beach — is located.

“We are able to get outside and do some walking even though you can’t go on the beach. You can walk around a little bit,” said Holmes, adding he enjoys “walking over to Holmes Beach every day.”

The timing of his fractured foot plus the baseball shutdown came at an inopportune time for Holmes, who felt good physically and mentally at the start of spring training after he felt he found answers to his inconsistent play last year.

He finished last year with a 5.58 ERA over 50 innings, but also had 10.1 strikeouts per nine innings. The inconsistency was illustrated best when from June 9 to July 2, he had a 2.61 ERA with 13 strikeouts and only 10 runners allowed in 10 innings then had a stretch of allowing 11 runs over six innings.

To help with it, he worked with a F5 Sports company that created “pitchLogic” technology that tracks and provides data such spin rate, spin axis and arm slot of each pitch.

He especially looked for data with his sinker, considered one of the best in MLB when going good, especially in getting weak ground ball outs and strikeouts. He felt he found the answers to what body and arm slot positions he needed to be at for the sinker’s maximum success as well as his other pitches.

“I felt really good going into spring,” Holmes said. “I felt like I was honestly in one of the best places I have been on the mound. So it is unfortunate how all this unfolded, but at same time I really have a good idea moving forward of what I need to do and who I need to be.”

The work was paying off too.

In three spring training game appearances prior to the injury, Holmes pitched 2 1/3 innings and recorded outs on all seven batters he faced, including one strikeout.

“It was a small sample size, but I didn’t give up any hits, runs or walks, so the results were there,” Holmes said.

As MLB waits for the COVID-19 virus to subside to start up the season, Holmes has been busy not only with his rehab, but helping health workers in the city of Pittsburgh. He has helped Pirate players donate money to buy pizzas and coffee to the workers.

In a personal note, Holmes said he and his wife along with his two brothers, Trey and Jacob, along with his parents, Wendell and Teresa, in Slocomb were all healthy and doing well during the virus outbreak.

For now, Holmes will continue his rehab then begin amping up for the season whenever it starts — and whatever season there might be.

“The build-up should be fairly quick, just throwing with no boot,” Holmes said. “With everything going on with the coronavirus, we have plenty of time.

“I am preparing to play. There is a lot of tricky stuff surrounding when we do go back of what things will look like. The players are looking at getting in as many games as possible, so you are looking at a lot of doubleheaders and possible expanded rosters to start the season. There are a lot of things in play, so we just have to wait and see the direction things will go and take it from there.”